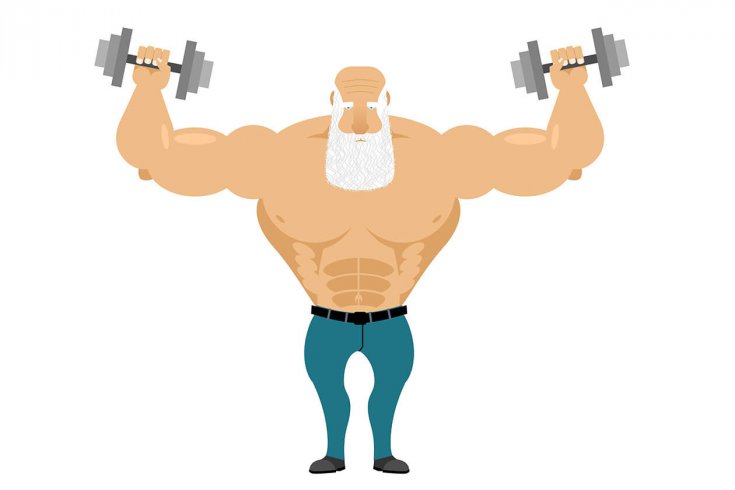 Next year is Canada’s 150th Anniversary—and for half of that time, my father has been quietly pumping iron three times a week in the basement. He has never made a big issue of it. It’s just something he does out of a sense of pride in keeping himself physically fit—and perhaps out of a tiny bit of personal vanity.

For ninety-two years of age, Alan Day is fairly remarkable. His doctor tells him his heart and lungs are those of a healthy fifty year old. He still has all his teeth and a good head of hair. He lives in a house on his own, cooks his own meals, still drives and does his own yard work and house repairs. He goes to the Legion for drinks on weekends but often complains that it is full of too many old people.

Most remarkable of all, however, Day is capable of bench-pressing well over his own body weight of 160 pounds (seventy-two kilograms) in his home gym. Based on the American College of Sports Medicine bodyweight-strength-ratio statistics, that makes him proportionately stronger than 90 percent of men in their mid-forties. A former Victoria fire chief, Day has trained with weights since he was sixteen. He has known and admired champions like Vancouver’s Doug Hepburn, the strongest man in the world in the 1950s, who was in the habit of casually bending dimes in half and crushing sugar cubes between his thumb and finger. Yet, although he’s always been strong, my dad never considered competing as an elite power lifter—until his ninetieth birthday.

When he showed no signs of giving up on his lifting routine, I began to research how many nonagenarian weightlifters there might still be out there. It turns out that there are two main categories of power lifters. Organizations like the World Association of Bench Pressers and Dead Lifters have records based on “equipped” lifts made with the assistance of bench-press shirts—wet suit–like jackets that support and compress the muscles and can give the competitor a 30 to 40 percent advantage in the weight lifted. In contrast, organizations like the 100% Raw Powerlifting Federation records are based on unequipped or “raw” lifts, which are comparable to Olympic standards and do not permit the use of bench press shirts or any other support equipment. The best valid competition “raw” record that I could find was an American nonagenarian who benched 135 pounds.

As Day’s raw bench press has always been impressive, and only 1 percent of the population lives into their nineties, I was convinced that there was a good chance of him setting some kind of nonagenarian record. So, at the age of ninety-one, my father agreed to emerge from his basement gym and enter his very first competition: the Western Canadian 100% Raw Powerlifting Championships, which were held this year in Calgary from June 4 to 5.

Initially, I contacted Adam Price, the co-chair of the competition. Price was “really pumped” at the idea of my dad competing—to date, the oldest “raw” competitor in the national federation record books was the extraordinary Joe Stockinger of Pincher Creek, Alberta, a former Olympian who at eighty-five holds their national and world records for octogenarians.

However, as a champion power-lifter himself, Price felt he must warn Day of the difficulties. In officially sanctioned powerlifting competitions, strict Olympic-standard rules are enforced. The competitor must lower the fully loaded bar until it rests in a steady, stationary position on the chest; then he must await the primary judge’s command to “press!” Three internationally qualified judges watch for the slightest lifting of the head, shoulders, or buttocks off the bench. The lift must be made in a single smooth, continuous movement upward until the arms are fully locked out. Only when all three judges register a green light does the buzzer go off to signify a successful lift.

Nobody lifts like this in a gym, but the slightest irregularity spotted by any one of the three judges results in an automatic red-light disqualification. “For about four months before going to Calgary,” Day says, “I had to change the lifting habits of a lifetime and adapt to these new competition rules.”

Luckily, he had the help of Gary Abbott, a fifty-seven year old who was recovering from a disabling surgery and had taken up weight training with my father once a week. Coincidentally, Abbott had once been a competition bodybuilder, and his knowledge of competition powerlifting standards proved critical to Day’s preparations. To suit the demands of competition lifting, he reduced his schedule to twice weekly. Once a week, Day would work his upper body with progressively heavier bench press lifts while Abbott made sure he kept proper form and responded to strict verbal competition commands. The second session of the week was dedicated to lower-body and supplementary-muscle training that would allow his upper-body muscles to rest and rebuild.

On June 3, after months of this new training regime, we flew to Calgary. When we arrived at the competition, my father was immediately a big hit—he was easily the oldest competitor by thirty years. His presence at the championship had been widely anticipated and announced on the 100% Raw Website.

CBC TV had also been notified and was there to record Day’s lifts as the gymnasium bleachers filled up. It was a mixed crowd: men, women, high school-level powerlifters, enthusiasts, professional coaches and instructors—and about a dozen cousins from the Alberta contingent of our family. But it seemed like every person in the gym cheered as the announcement was made: “First Lift, Alan Day: ninety-one years young!”

His first lift was a modest 126 pounds. He had been advised to start with a weight he was confident with, just to make sure he got an initial registered lift. Since he was the only national federation lifter over ninety years old to register an adjudicated lift, he immediately set a Canadian record.

His second lift was a more substantial 138 pounds, and broke any known “raw” North American record in his age and weight class. Then there was an uproar in the crowd—and much flashing from phones and cameras—as Day was given three green lights with his third lift of 144 lbs to set the 100% Raw Federation world record for all weights in the ninety-year-plus age category.

“I was quite surprised, because Alan doesn’t look muscular, although he looks fit,” remarked Herb Veckenstedt, a 220-pound powerlifting champion and the competition’s other co-chair. “So when he did it, the crowd cheered like crazy. It was incredible.”

There were more shouts and cheers of congratulations all around as people asked to have their pictures taken with Day, among them several seasoned power lifters—and not a few young women. “He’s a chick magnet!” says Abbott.

At the awards ceremony, Day received two medals. The first reads, “1st Place—Western Canadian Championship,” and the second, for breaking the national and world records, says “Legend Award—Alan Day.” As they placed those medals around his neck, I briefly reverted to a twelve-year-old boy bragging to his friends. “It’s official now,” I thought. “My father is a legend—and he has the medals to prove it!”

When he got back to Victoria, Day discovered he made the front page of his hometown newspaper. His powerlifting prowess was quite a surprise to friends he had known for years at the local Legion. “It really wasn’t all that hard,” he quipped. “Most of my competition is in the graveyard.”

And what does my dad have planned for the future? Now that he’s got the knack of competition lifting, he’s refining his technique with Abbott and the results are encouraging. He feels certain he will be able to break his own record before the end of the year. “Let’s put it this way,” Abbott explains. “He can lift nearly his own body weight, something most twenty-year-olds can’t do. So, it really cracks me up when people say to me, ‘I wouldn’t want to live to be ninety.’ I tell them they should spend an afternoon working out with Alan Day.”

Days from now, at the age of ninety-two, my father and his entourage will meet up in Toronto and then drive down to Erie, Pennsylvania, for the 100% Raw Powerlifting Federation World Championships. There, he will compete along with 500 other power lifters drawn from the federation’s ten thousand members from twenty countries—and I’ll get to go on a road trip with my dad, the Legend, once again.

David Day is the author of Alice's Adventures in Wonderland Decoded.