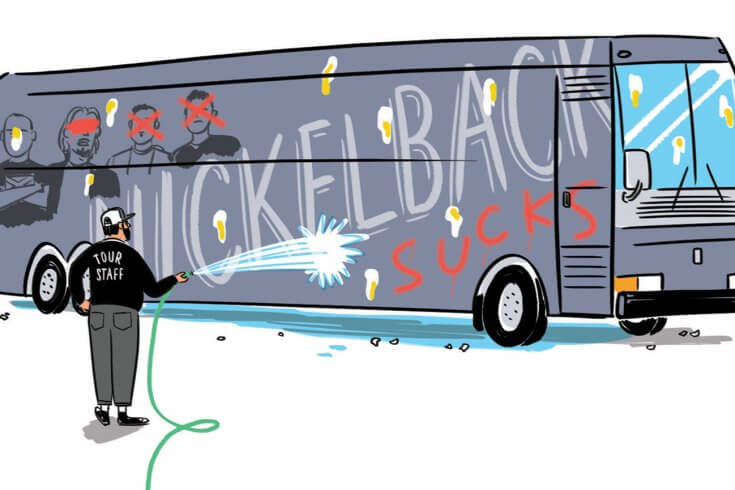 “Figured You Out,” from Nickelback’s 2003 album, The Long Road, opens with a lyric about a woman performing fellatio in the great outdoors on singer and pop-culture punchline Chad Kroeger. “I like your pants around your feet,” he moans. “And I like the dirt that’s on your knees. And I like the way you still say please while you’re looking up at me.” Other things Kroeger either likes or loves about his nameless supplicant: the way she can’t say no, the powder on her nose, the way she’s not impressed, the white stains on her dress, and her lack of self-respect while she’s passed out on the deck. To call this innuendo isn’t quite right. Nothing is being suggested. It’s not sexual; it’s sex, plain and vulgar. Kroeger wants to make it perfectly clear that he’s getting a blow job, and really enjoying himself, out there amid nature’s bounty.

I’m halfway through the first Nickelback song I’ve ever made time to sit down and listen to—not just hear through the jukebox at a dive bar or over the PA at a hockey game. And I think I’ve got it. It’s the unsubtlety, the obviousness, the blunt-force blatancy. This—this is why we hate Nickelback.

Then again, take your pick. Ever since the release of the band’s breakthrough 2001 album, Silver Side Up, Nickelback has entrenched itself as the broadest possible target of contemporary cultural scorn. It’s taken for granted that, like racism and pushing old ladies into traffic, the band is incontrovertibly, axiomatically bad. The most notorious iteration of this truism came in 2011, when a headline-grabbing Internet petition aimed to bar Nickelback from playing a Detroit Lions halftime show. But there are plenty of other examples. In 2012, a low-level international incident saw Chicago mayor Rahm Emanuel state on the record that he was not a fan. Online music magazine Aux developed a browser plug-in called Nickelblock that filters out any mention of the band. In January of this year, an Instagram photo of a garbage truck, captioned “Following nickelback’s tour bus,” reaped tens of thousands of approving likes.

This hatred is internalized by Nickelback’s legions of devoted fans, who flock to concerts, strong-arm the band’s records to the top of the charts (their most recent album, No Fixed Address, debuted in November at number two in Canada and number four in the US), and clutter online forums with Photoshopped posters reading “Keep Calm and Love Chad.” These fans know Nickelback is unhip, and they don’t care. Stephen Smith, a twenty-six-year-old Toronto-born fan, readily admits as much. “There is absolutely nothing cool about Nickelback,” he tells me.

More crucially, the hatred has also been co-opted by the band, who even wrote a song, “This Means War,” about sparring with their detractors. In a recent article on The New Yorker’s website, Ian Crouch writes that the widespread animosity has bestowed upon “a bland, soft-metal, post-grunge band the outsider, bad-ass edge that it had always projected but never earned.” After the release of No Fixed Address, Kroeger even spun it as a good thing. “I don’t think that all the haters and the critics know how many favours that they’ve done for us,” he told the Canadian Press. “Now we’re this controversial band. Everyone’s like, I hate them, or, I love them—whatever it is, people are talking about us.” Like Freddy Krueger of A Nightmare on Elm Street, whose power is sustained by children’s fear, Nickelback is nourished by our hate.

Grunge began, like so many great artistic movements, as a reaction. By the mid-’80s, mainstream American hard rock had lost its edge. The early promise of New York punk and West Coast heavy metal had dissolved in a sea of glitter and coke. Grunge emerged to reclaim heavy music from hair metal and glam rock—to make it angsty and abrasive, the soundtrack to a slacker insurrection. But by the mid-’90s, that spirit was being sold to the masses wholesale, thanks to the mainstream success of Soundgarden, Pearl Jam, and Nirvana. The emergence of so-called post-grunge bands, such as Silverchair and Collective Soul, proved that, stripped of its sludgy legitimacy, the music could be as commercial as anything else.

Nickelback formed around this time, playing Led Zeppelin and Metallica covers in Hanna, Alberta, their tiny coal-mining hometown. As post-grunge crested into the twenty-first century, they and their contemporaries—Creed, Puddle of Mudd, 3 Doors Down—brought things full circle, retaining the chunky guitars and tetchy vocals but dropping the alienation. Instead, they sang about heartbreak, partying, and their own stardom. (“We all just wanna be big rock stars, and live in hilltop houses driving fifteen cars,” Kroeger growls on “Rockstar,” which the Guardian deemed the band’s worst song.) So it’s easy to blame Nickelback and their fellow travellers for despoiling grunge’s potential. It’s like when a jock rolls into high school wearing a Clash T-shirt, burglarizing the music nerd’s hard-earned countercultural credibility.

But there’s a problem with this tidy narrative. As Jason Heller writes in Pitchfork, grunge always aspired to replace dinosaur rock; its endgame was nothing short of “a nation of arenas full of flannel.” With grunge, mainstream rock had simply dressed itself up in Gen X woe, and the flannel eventually morphed into cheap cowboy hats and Ed Hardy sneakers. Nickelback is the mutated, douchey upshot of this broken promise—a constant reminder that everything we believed in was only ever a swindle.

And what a lucrative swindle it’s been. Obviously, a band that’s sold 50 million records and is currently in the middle of a ninety-eight-date world tour is far from universally hated. In our idols, we seek people who have the self-confidence we lack, and this is especially true of Nickelback. There’s a hardy, oblivious confidence to them that fans love. The band shrugged off the (ultimately unsuccessful) Detroit Lions petition, replying with a jokey viral video; after all, they are grinning millionaires many times over. If nothing else, they believe in themselves. It follows that their fans would pay good money to catch a whiff of that swaggering self-assurance.

“It makes you feel good about yourself,” says fifty-three-year-old Pennsylvanian Ginger Recknagel, whom I met on a Facebook group for Nickelback fans. “Nickelback grew up in Canada. They were local boys. They didn’t have much to begin with. They became famous because their songs are written from the heart. People who aren’t able to do that are jealous.” Still, this explanation only makes partial sense. I understand why Recknagel loves the band, but I don’t think jealousy quite explains why people loathe them. Haters don’t hate because they want to be Nickelback. They do so in order to define their position against Nickelback. It’s obnoxious, sure. But in this case, hatred may not be a bad thing.

Over the past decade or so, there’s been a vital movement in music criticism (and arts writing more generally) toward what’s called “popism” or “poptimism.” Like grunge, popism started as a reaction—this time against the prevailing culture of “rockism,” which, beginning in the ’60s, dominated music journalism. Rockism, the critique goes, overvalued sullen singer-songwriters, junkie punks, and other—typically white, typically male—musicians who expressed that ineffable, ephemeral quality of authenticity. In the process, it ignored worthwhile forms such as hip hop, dance music, R&B, and other stuff you might hear on Top 40 radio—that is, stuff people actually like.

The popist swing has done noble work accounting for the virtues of these genres; Carl Wilson’s 2007 book, Let’s Talk about Love, even sought to find something meaningful in our most loathed diva, Céline Dion. But Nickelback undermines both rockism and popism. They’re everything popism rightly pushed back against: dumb, arrogant rock music. They are also, essentially, a boring, formulaic pop act. They are the worst of both worlds: neither good nor inventive, a band nobody would bother trying to redeem.

In this sense, Nickelback is useful. Every generation has its joke acts: the Archies, Billy Joel, Foreigner, Phish, Hoobastank (the name alone!). The looming spectre of big, bad bands helps us outline and nurture our more private passions. Next to Nickelback, pledging allegiance to other pop mediocrities, such as Taylor Swift or the Killers, almost feels like a subcultural, subversive loyalty. Nickelback’s endurance, their stubborn refusal to go away, is encouraging. They’re the hard, inedible lump of Yorkshire pudding at the cultural omnivore’s pop buffet. More than being a meme, a joke, or critical shorthand for the objectionable, they are a bad band. And as such, they carry the weirdly buoying promise that there will always be bad bands.

Without our hostility, Nickelback would probably wither away, back into the annals of rock-’n’-roll cliché. And then where would we be? We need them, and they need us. Imagine Chad Kroeger, out there, unzipped, with no one to fellate his rock-star ego. No one gazing up at him. No one to say please. Just a man, alone, standing there with his dick in his hands. It’s almost enough to make you feel sorry for him. Almost.

John Semley's latest book is Hater: On the Virtues of Utter Disagreeability. He grew up in the Niagara Region.
Kyle Metcalf