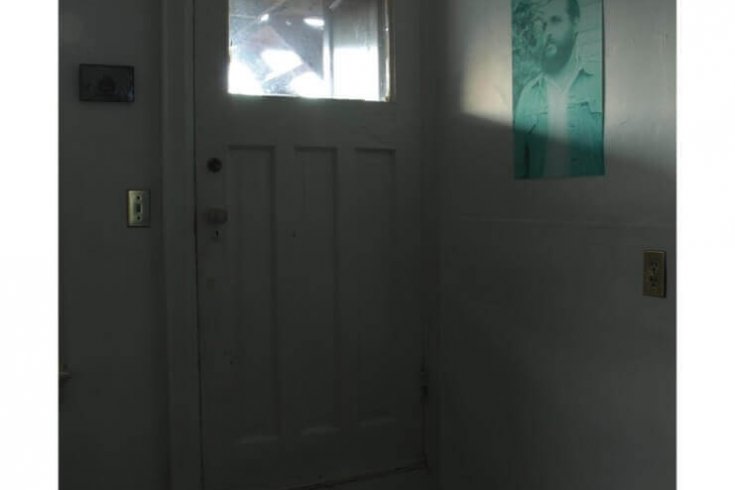 Toronto artist Tony Romano’s sequence of photographs acts as a kind of forewarning: this could happen to you. Art, however eternal its subject, is not itself permanent. Under the wrong conditions, even a remarkable picture will not last; many faces before this bearded one have been drained of their detail, or have vanished completely. Archival preservation is the key to a long life, and proper storage means protection from harmful UV rays. Romano’s series is an account of the reverse, showing a picture placed directly in harm’s way to sear the surface and accelerate chromatic fading. Romano documents the inks subtracting from the paper over time, a picture each season, one might reckon, or each year—how quickly does the sun take back its rainbow?

The man in this fast-fading photograph is the artist himself. Romano has Romano’s picture tacked to a wall near the entrance to his own second-floor apartment. As time passes in Toronto and elsewhere, the photo paper is altered. Literally and temporally, the title, Waiting for Blue, can refer to the clear-skied days Romano required to blight the photograph and complete the project. The hirsute picture is reminiscent of the posters advertising expired hairstyles that hang in lonesome salons across the country. As time passes, one can imagine the artist’s thoughts on the picture going beyond the skin, deeper, to become more contemplative. Romano would not be alone in waking up with something along the lines of the opening of Samuel Beckett’s novel Murphy: “The sun shone, having no alternative, on the nothing new.” Like Romano’s picture, every person is whittled down by each day spent under the sun. By the last image, all that remains is something of an ectoplasmic ghost as the artist recedes into the white shroud of the paper. In the age of the digital photograph, in which trays of chemical washes have been traded for silicated code, this narrative reminds us of this change, of our increasingly impatient relationship to the processes of time. Romano takes a fine, hale photo of himself and, through its disappearance, confronts our thoughts of loss. His own mortality, what may or may not lie beyond the blue he’s waiting for—Romano waits for wounding illumination.

The French art critic, modernist novelist, and literary theorist Maurice Blanchot, whose writings profoundly influenced Foucault, Barthes, and others in the Frankfurt School and modern French literary theory (on which much of contemporary art theory is based), was rigorously obsessed with ideas of the neuter, self-erasure, and that first step beyond death, whatever it may be. Romano’s self-neutralizing sequence seems deeply related to these formative modernist concepts. Blanchot’s final work of short fiction, “The Instant of My Death,” hinges on a grim personal memory, “the encounter of death with death,” as he calls it. Romano’s photo quartet, in its reflexivity and attention to the metaphysical, is something of a modern visual analogue to Blanchot’s story. Canada’s great wars are still fought at a distance, still not perceived as a direct threat to our hair or our lifestyle, but they are crucially ongoing. Contemporary Canadian art is the picture impaled in this world mirror.

Waiting for Blue is a reflective work that simultaneously looks forward to what lies beyond the picture, after the image is gone. Romano’s gallery work, especially his recent Pendulum project in Vancouver, works similarly. It occupied an appropriately provisional site—it, too, showed up then faded out—in the vaulted mezzanine of the HSBC building across from the Vancouver Art Gallery. Since early in this decade, Romano and Tyler Brett, acting as a collective called T&T, have presented artwork as a kind of mock enterprise, providing architectural maquettes aided by Mad Max scenarios on paper—Photoshopped architectural renderings of future landscapes and lifestyle solutions for survival after a dire apocalypse. Walking among these conceptual pieces during the recent Winter Olympics protests, I saw demonstrators outside dressed just like avatars from a T&T model, people whose visions for the future might be dominated by the same dreams of a doomsday change to the process, but more sincerely felt. The exhibition’s humour was lost on the protesters and their equivalents among the police, not one of whom stopped to see the ironies in Romano and Brett’s apocalyptic artwork. Who fades faster, the artist or his image, the image or the idea, the idea or the meaning? Maurice Blanchot writes of the sensation in the moment before death of how “all that remains is the feeling of lightness that is death itself or, to put it more precisely, the instant of my death henceforth always in abeyance.” Abeyance—a terminal form of waiting, a revolutionary form. In Romano’s pictures, abeyance is in the four seasons of the colour photograph’s sequence, with no fifth after cyan.

This gallery is made possible by RBC’s support of emerging visual artists in Canada
This appeared in the December 2010 issue.

Lee Henderson, an associate writing professor at the University of Victoria, published the award-winning novel The Man Game in 2008.
Tony Romano