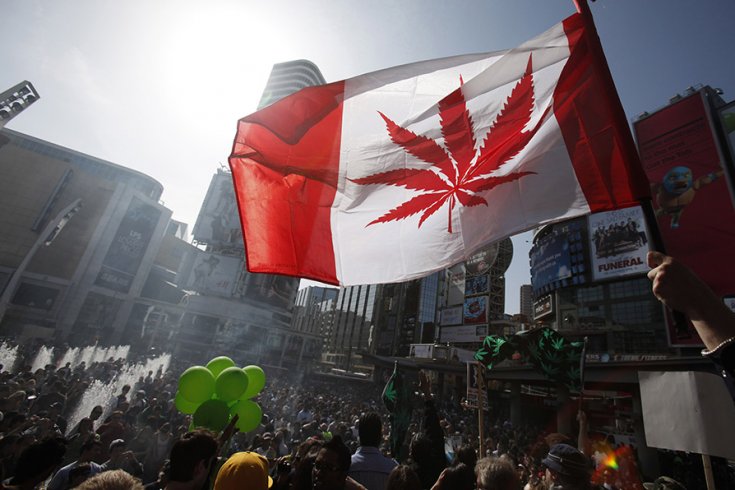 Everybody, let’s be honest—some of you heard that, because some of you are stoned. Such is life in Canada, one of the planet’s leading consumers of cannabis. In 2009, 11 percent of Canadians over the age of fifteen admitted to having used marijuana, hashish, or another cannabinoid at least once, a rate of prevalence that almost trebled the worldwide mean. Jack Layton, Stockwell Day, Neil Young, Pamela Anderson, and several Margaret Atwood characters are all, shall we say, experienced. Stephen Harper, notably, is not.

In recent years, scores of 4/20 events have shifted to early May, grouped under the banner of the Global Marijuana March (the reasons are sketchy; stoners are poor explainers). Last May 1, Toronto’s edition of the GMM drew 40,000 participants to Queen’s Park, the seat of Ontario’s government. As usual, it climaxed with a 4:20 countdown to mass ignition. This spring, GMM organizers have targeted 420 international cities as host sites, including (as usual) Halifax, Montreal, Ottawa, Regina, Calgary, Edmonton, and Vancouver.

Officially, the march is a protest against prohibition. Cannabis consumption has been illegal in Canada since 1923. The Controlled Drugs and Substances Act prescribes up to six months in prison and a $1,000 fine for possession of thirty or fewer grams of marijuana. (Until 1998, the ban included its distant, non-euphoric cousin, industrial hemp.) Still, police rarely interfere with 4/20 events; the website for Toronto’s GMM claims an eleven-year streak of zero arrests. A cop I know who works in the Greater Toronto Area recently told me that 85 percent of his colleagues can’t be bothered to arrest someone for smoking a joint. The crime is considered unworthy of the paperwork, he said.

For some tipplers, the end of Prohibition spelled last call 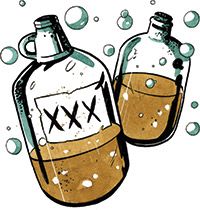 One Kentucky “revenuer” (the colloquial term for federal agents responsible for regulating alcohol production) reported hearing that a majority of drinkers in his district “considered [moonshine] much better” in taste and effect. William Faulkner himself was reputed to prefer his booze illicit: “Between scotch and nothing, I suppose I’d take scotch,” he famously remarked. “It’s the nearest thing to good moonshine I can find.”

During the past decade, Parliament has thrice discussed decriminalizing the personal use of cannabis—a half measure that would mildly benefit users (including medical marijuana patients), but leave the hidden foundations of Canada’s $20-billion pot industry in place. The bolder, better choice is legalization, which would root out criminal organizations, including Asian triads and the Hells Angels, which are known to operate some of the country’s estimated 50,000 clandestine grow houses. Legalization would slash hydro theft, move cultivation out of suburban cul-de-sacs, and give farmers a sustainable cash crop. The police would be able to investigate more harmful crimes; courts could decide more important cases. It would stop wholesalers from accepting cocaine from American buyers as payment for pot, a shockingly routine occurrence. And it would prevent marijuana’s unknown Seagrams and Bronfmans from stockpiling fortunes that the Canada Revenue Agency will never see.

Legalization also happens to be the best way to stop the party. Think about how our culture romanticizes law-breaking during Prohibition: running rum across the Windsor-Detroit border was cool; crossing the St. Lawrence with a load of whisky by moonlight was sexy. Now think about how few cannabis users are caught, let alone punished—and realize that the great majority of potheads get to romanticize themselves, because they are cool and sexy and totally getting away with it.

Dry mouth notwithstanding, marijuana is a major social lubricant. It bonds artists with bankers, neighbours with neighbours, and teachers with students. The drug’s illegality gives users something to talk about. Strangers become friends while spying over one another’s shoulders for authority figures—or, roughly once per year, while marching together in rages against the machine’s least fearsome laws.

Little do they realize they are burning themselves. As odd as it sounds, legalization would constitute a victory of sorts in the otherwise unwinnable war on drugs—because retailing pot is one of the worst punishments our government could reasonably inflict on potheads. If you doubt that, try buying a bottle of scotch after midnight, or a pack of cigarettes without photo ID. Meanwhile, cannabis transactions can happen at any time, anywhere (no shoes, no shirt, so what?). Cash moves from buyer to seller, from white market to black, and the only Canadians seeing an advantage are the ones lighting up, and the others taking tax-free payments all the way up the chain.

A national policy of legalization, licensing, and taxation would bring cannabis in line with alcohol and tobacco, both of which are more damaging to consume. There would be an uproar from certain groups—Debbie Downers and the US DEA, for instance—and from cannabis consumers, who would trade their outlaw freedoms for sales receipts with calculated HST. But if that day ever dawns—i.e., if the government chooses to redirect the proceeds from a massive, entrenched industry toward health care, infrastructure, and other public goods—it only seems natural that the mood across the country would become a bit… higher.

Matthew McKinnon (@matthewmckinnon) is an editor, writer, and designer.