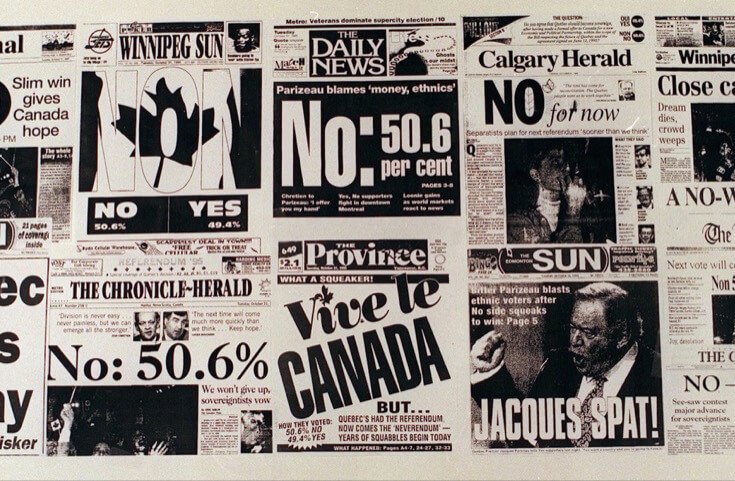 Newspaper headlines from October 31, 1995, the day after the referendum vote.Canadian Press

I had never felt closer to Quebec than on the night of October 30, 1995, sitting in an apartment on Montreal’s Plateau watching the results of the province’s second referendum on sovereignty. The narrow federalist victory, and the promise of a combative concession speech by Premier Jacques Parizeau, compelled me and a friend down to the Palais des congrès to see how the rest of the night would unfold. Dejected Parti Québécois supporters were fleeing the convention hall, and we walked straight to the stage just as the premier mounted it. As a result, we were among a much diminished crowd standing five metres from Parizeau when he expressed his soon notorious view that Quebec’s dream of statehood had been defeated by “l’argent et le vote ethnique.” My friend, a transplanted Chicago Jew who worked as a novelist and translator, turned to me and quipped, “You must be the money, and I must be the ethnic vote.”

It was true that while I’m half-French, I am also half-English—complicit in the “money” Ottawa had poured into the federalist campaign. As we wandered up to rue Sainte-Catherine in the biting cold, we stopped to chat with a group of young nationalists, many wearing punk attire and facial jewellery, gathered around oil barrel fires in a vacant lot shouting, “Vive le Québec libre!” and waving handwritten placards, the slogans imperfectly transcribed. Their mood was foul, a bitterness fuelled, I sensed, by stimulants as much as by defeat, and I was content to move on. But my Chicago friend, his impeccable French accented, told one protester that if he loved a free Quebec so much, he should learn to write his own language correctly. The kid was too stunned to object.

It has taken me most of the subsequent sixteen years to decide what came to an end that night, and to resolve whether it is indeed a national absence or—infinitely smaller—a mostly private loss. Born in suburban Toronto to a Franco-Ontarian mother with eleven siblings and an Ottawa Irish father with one sister, I was raised believing that part of my nature, and most of my relatives, belonged to a parallel Canada that spoke French and ate tourtière, happy to genuflect before the holy trinity of God, the Pope, and Maurice Richard. In early adulthood, I migrated to Quebec during the summers, starting with Quebec City in 1980. Arriving a week after the first referendum, I rented a tiny basement room on the street facing the massive Plains of Abraham, site of the 1759 battle that had birthed both the psychology of a defeated French minority in North America, and an epic dialogue between Canada’s two founding peoples concerning the shape of the nation.

On Saint-Jean-Baptiste Day, lately redubbed La fête nationale, I sat on the plains with some 100,000 others, listening to chansonniers singing of defiance. Claude Dubois and Diane Dufresne, as I recall, performed lyrics that the crowd had memorized, and that I was slowly learning. When Fabienne Thibeault delivered the refrain of “Le monde est stone,” a haunting song from the rock opera Starmania, she let us sing for her.

Soon I was performing a Paul Piché song in a café on rue Saint-Jean with a local guy who was renting another room in the same house. A fiery separatist, Piché had become my favourite chansonnier, and though I wisely contributed only to the chorus of “Mon Joe,” I was thrilled to strum a guitar in a Quebec City café, every bit the proud young half-French-Canadian. Two summers later, I was back in the provincial capital, working as a historical tour guide in the Lower Town, and eventually my wife and I settled in Montreal, where our daughters were born. If I was forever an outsider, stopping by for just a while, I also possessed the crooked nose and nasal accent of my mother’s tribe.

But my impulse to engage French Quebec was hardly unique. For a generation of Canadians, exploring that dynamic was a rite of passage, allied to Pierre Trudeau’s vision of the country, or maybe to his charisma. Allied as well to the ongoing conversation between those historic solitudes, one made all the more urgent by the spectacular rise of electoral Quebec nationalism from the ashes of the October crisis. Young adults from Vancouver to Halifax installed themselves in Montreal during the ’80s and ’90s, anxious to feel some of those stirred passions, if only to gauge how deeply they held them in their own hearts.

Now I wonder if the conversation wasn’t already dated by 1995, along with the notion of Quebec as a once and future nation-state. The idea—of a country comprising a single identity, a single narrative—was straight out of the nineteenth century, and had ended up badly discredited by the twentieth. Long before Quebecers went to the polls for a second time, Canada was admitting to more than two identities, with the English-French duality being recognized as an afterthought to aboriginal interests, millennia old: it was also a society of multiple solitudes nurtured and evolved under the banner of multiculturalism.

In short, Canada then was both a bigger country than we imagined, and a different one. That many of us hadn’t yet recognized this was hardly surprising. The nation had passed its first century in a torpor, clinging to a fading colonial identity in lieu of establishing its own. Then, starting in the ’60s, everyone wanted to define everything. If the language, and the terms, were too conventional, the impulse remained modestly radical. Similarly, if I still can’t help referencing that formative dialogue, it is personal: I was raised on Trudeau and tourtières, and came of age singing separatist anthems in a Quebec café.

But autobiographically speaking, I am yesterday’s Canadian, and would be content if the narrow, parochial national narrative that formed me has truly played out. “C’t’aujourd’hui l’jour de l’an,” Paul Piché sang in “Mon Joe,” “Y faut change d’maîtresse.” (“Today is New Year’s Day, and it’s time to change mistresses.”) In 2011, the song, which I still love to sing, isn’t about any Quebec—or Canada—I much recognize.

In 1978, the phrase “Je me souviens” replaced “La belle province” on Quebec’s newly minted licence plates. The sentiment—“I remember”—was poignant, but no one knew why. “I don’t remember what it’s supposed to mean,” Quebec resident Gilbert Piche told Robert Goyette, a reporter for the Montreal Star. Other Quebecers put forth theories: according to biology teacher Rodrigue Bernard, the phrase “evokes the taking of French Canada by the English.” Jean-Marc Garant of the Quebec National Archives called it a rebuttal to Lord Durham’s notorious characterization of Quebec as a region without history. Goyette’s piece never resolved the issue, which was further complicated when a Star reader, Hélène Pâquet, wrote the newspaper claiming to be the granddaughter of the motto’s author. According to Pâquet, the words are excerpted from a longer poem, which reads, “Je me souviens / Que né sous le lys / Je crois sous la rose” (“I remember / That born under the lily / I grow under the rose”)—suggesting that the expression is not so much a nationalist rallying cry as a homage to the dual origins of the Québécois identity. Pâquet’s revelation was contested but never disproven. To this day, the motto remains as vague, and as galvanizing, as ever.