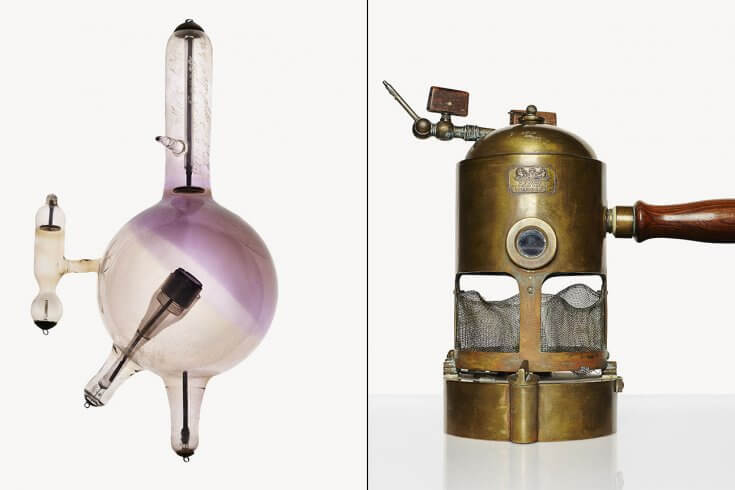 Tools of the trade More than a century ago, the Royal Victoria Hospital inaugurated a training school that helped elevate nursing from practice to profession. Emblematic of the changing role of nurses—from well-trained servants to partners in care—this wicker basket was made suitable for hospital use with a simple cotton lining and a coat of white paint. Well into the 1960s, nurses were expected to follow doctors as they made their rounds, carrying supply baskets like this one, which is kitted out for an ear, nose, and throat specialist. It holds wooden tongue depressors, cotton swabs, a nose dilator, a needle kit, and an alcohol lamp—which was employed to prevent the doctor’s throat-examination mirror from fogging up while in use.

The eerie beauty of obsolete medicine captivates us because it lays bare the barbarousness of the healing arts. The objects featured on these pages, unearthed at the Royal Victoria Hospital in Montreal in the months before its doors closed on April 26, bring the point home. As staff prepared to transfer 250 patients to the city’s shiny new super-hospital, surgeon Jonathan Meakins looked through old rooms and storage cupboards, where the detritus of more than a century of medicine—forgotten drugs, surgical tools, lab equipment—had accumulated.

What is modern and current in medicine is only so for a moment. The body and its malfunction are still understood so imperfectly that even bedrock concepts—stomach ulcers and hyperacidity, cardiologists’ concerns over dietary cholesterol—are overthrown regularly. While the periodic table is constant and the general theory of relativity remains as shocking and counterintuitively true as it was in 1915 (when the Royal Vic still was fairly new), medicine is ephemera and fashion, as much about theatre as it is about science.

The wicker basket (opposite) that nurses once used to carry medical supplies seems horribly out of place. How could it have been properly cleaned? If a thing isn’t plastic or stainless steel, our sensibility of the moment says, then it is a menace, as surely as C. difficile and MRSA bacteria spread through the Royal Vic in the last years of its life.

Imagine being sick in a hospital where the scalpels are not sterile, where operating rooms are disinfected by spraying carbolic acid mist, where the nurses’ evening duty is to sharpen the needles. Try not to twist. It’s an anachronistic response anyway; the patients and caregivers then thought themselves at the cutting edge of surgical and medical science. And they were. They felt as soothed by their innovations as we do by ours.

Blown glass has an especially potent and lingering grace. Words engraved in beautiful looping copperplate script on the Müller X-ray tube announce its age, and the art of its creation remains apparent in a way that has long outlived its usefulness. The medical sensibility that valued the beauty of such apparatuses was retired long ago.

In another eighty years, our current medical cathedrals and elaborate treatment regimens will appear just as quaint—and creepy—as those of nearly a century ago. Nobody then will be made to lose all their hair and most of their bone marrow in order to have their cancer cells switched off. Our grandchildren will speak with horror about the use of radioactivity to treat malignancies—just as we do when discussing the use, in the flapper era, of arsenic and mercury to treat syphilis. And they’ll wonder at the untreated problems around us: a quarter of us obese, 10 percent of us diabetic, addiction and depression prevalent and yet little understood.

Norman Bethune’s elaborately beautiful pneumothorax apparatus was used to collapse a tubercular lung so that it could heal. In that pre-antibiotic era, the insertion of the needle into the chest was more talismanic than curative. We may be confident that much of what doctors prescribe to patients today will be disdained as barbaric ritual tomorrow.

Nik Mirus is a still-life photographer based in Montreal. His current exhibit at the McGill University Health Centre, Art in Medicine, was developed from a photo essay that appeared in the June 2015 issue of The Walrus.