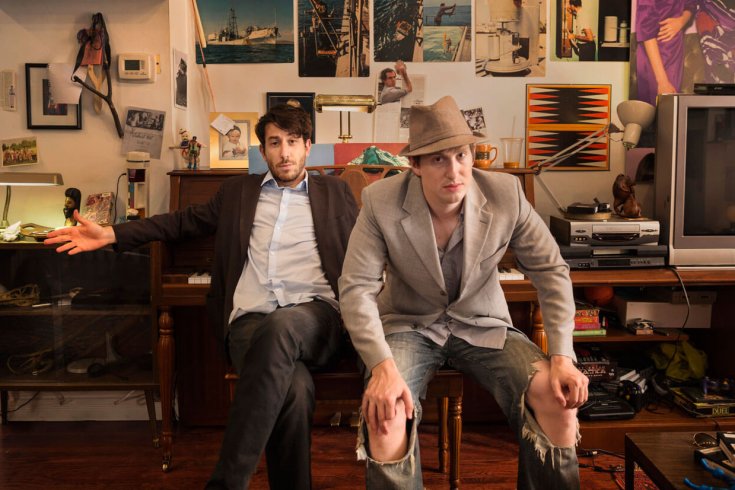 Matt and Jay live to pursue a single goal: to get their band a gig at the Rivoli, a performance space in downtown Toronto. It’s a humble ambition, but to them, it’s everything. Each morning, they hatch another harebrained scheme to realize their Rivoli dreams. By evening, their plot has unravelled, leaving them exhausted but also exhilarated and ready for the new day, when they’ll resume their lifelong battle.

That’s the entire premise of the Viceland TV series Nirvanna the Band the Show. It doesn’t have side plots or secondary characters. The protagonists are thinly sketched—more stick figures than oil paintings. Matt and Jay have no backstories, emotional lives, day jobs, or friends. They don’t need these things. Their futile dream sustains them.

If you’re into Greek mythology or French existentialism, the show may call to mind Sisyphus, the fallen king who’s forced to push a boulder up a hill for all eternity only to have it fall back down on him. If you’re into Saturday morning cartoons, the show will remind you of Pinky and the Brain, the ’90s Warner Bros. series about two genetically enhanced lab mice who repeatedly plot to take over the world and fail spectacularly. Nirvanna’s creators, best friends Matt Johnson and Jay McCarrol, acknowledge both as influences.

The best web series reflect the gonzo aesthetics of the amateur Internet. They test out loopy conceits, and they feel like extended improv sketches.

The bigger influence, though, is the Internet, the medium through which the show, in its 2007 iteration, first made it into the world. Johnson and McCarrol filmed that version in their shared apartment and gave it away on their website. The show was both on the Internet and of it. It had the repetitive structure of a GIF and the randomness of a meme. Johnson and McCarrol had no budget, producers, or network affiliations. But they did have fans, including in the US, the UK, Australia, and New Zealand—not bad for an amateur production in a country where cable shows fail to find audiences. When Viceland, the new TV arm of Vice Media, approached Johnson and McCarrol in 2015 about creating an original series for the network, the duo came back with a counter offer: Why not redo Nirvanna, but better and with an actual budget?

This was a risky proposition. An infusion of network money can ruin a web series fast. The best web series reflect the gonzo aesthetics of the amateur Internet. They test out loopy conceits—the kind that aren’t easily marketed offline. And they feel propositional, like extended improv sketches. When web series migrate to television, the creators have to deal with writers’ rooms and focus groups—mechanisms that sometimes kill spontaneity. Several web series have made the jump to TV, often with disappointing results. After two successful online seasons, Pure Pwnage, a Toronto slacker comedy about gamers, moved to the specialty channel Showcase, where it became a shadow of its former self. “The actual TV version was just garbage,” says Johnson, “because all of a sudden the creators needed to justify every choice to the network.”

Nirvanna has now made the same web-to-TV transition, but—with its scrappy production, uneven sound quality, and messy storytelling—the show feels true to its roots. It’s still a web series, just one that happens to be on television.

When they made the old version of the show in 2007, Johnson and McCarrol were recent university graduates who knew nothing about audio-visual production. So they worked things out as they went along. To make the project manageable, they devised a set of rules, to which they still adhere. First, the show must never stray from its recursive premise: no complex, long-arc stories. Like a meme, the show has a thin conceit that is spun off into endless themes and variations. Second, Matt’s role in Nirvanna the Band won’t be revealed. Jay plays the piano. But Matt? Who knows. The “band” never performs any actual songs.

Third, although the show is set in the present day, the cultural references are all from the ’90s. Matt and Jay play Nintendo 64, watch films on VHS, and quote Jurassic Park and Home Alone. It’s as if they’ve been so fixated on their Rivoli dream that they’ve missed every cultural development of the past seventeen years. Even their ambition—to get a gig for their band—is a ’90s cliché.

The fourth rule: the show must be spontaneous. Instead of working from scripts, Johnson and McCarrol improvise their way through loose storylines. They don’t recite dialogue; they banter, as best friends do. And the jokes are somewhere between idiotic and inspired, which is to say that they’re Internet jokes through and through. In one scene, Matt tells Jay about a local pervert who, after accosting a stranger, took out his penis and started doing “penis things.” You know, penis things. Either you find that joke funny or you don’t, but there’s no sense in trying to explain it.

Fifth, there are no actors other than Johnson and McCarrol. The rest of the “performers” are bystanders who get drafted into the narrative. In the second episode of the Viceland series, Matt and Jay attempt to sneak a makeshift float—a shitshow on wheels—into the Santa Claus Parade. Johnson and McCarrol really pulled that stunt, and the cop who stopped them was an actual cop. He’s one of nearly sixty Torontonians who became unwitting extras in the Viceland production. (After filming a random citizen, Johnson and McCarrol dispatch interns with release forms to retroactively secure permissions.)

Finally, and most daringly, the show uses other people’s intellectual property. In episode three, Matt and Jay attend the opening of Star Wars: The Force Awakens. Cammed scenes from the movie make their way into the show. That’s usually a no-no in the TV world, but it isn’t strictly illegal. “When we made the show as a web series,” says Johnson, “we thought, fuck everybody, we are going to do things that you just can’t do on television.”

They’re still doing that, albeit in consultation with their lawyers. In the process, they’ve learned the nuances of parody law, free-speech statutes, and fair-use conventions—rules they bend but hopefully don’t break. While Johnson won’t fully divulge his trade secrets, he explains that in North America, storytellers have a high degree of freedom to use licensed footage, so long as the material is integral to the narrative and its usage doesn’t harm the copyright holder. Back when the show existed online, Johnson and McCarrol needn’t have bothered with such legal esoterica. The Internet, after all, is the Wild West of copyright. Now, thanks to Viceland, that Internet-y irreverence has made its way to TV.

The Internet is many things—a platform, a communications system, and a global infrastructure network—but it’s also an aesthetic, one that’s hard to define but easy to recognize. When somebody talks about “Internet-y humour” or “blog-y writing,” you know what they mean. The Internet is the place you go to for dick jokes or GIFs of dogs humping people’s legs. The phrase “penis things” describes a wide swath of Internet-y humour. Web aesthetics may be native to their medium, but they bleed into the offline world, in ways both exciting (net art exhibitions at New York galleries) and terrifying (mainstream political discourse subsumed by the paranoid language of Twitter).

Web-series conventions are slowly finding a place in the narrative TV world. HBO’s High Maintenance also got its start as a web series, and like Nirvanna, it made the web-to-TV transition without losing its Internet integrity. Other cable shows, like Louie or It’s Always Sunny in Philadelphia, have the madcap plots and manic energy of web series, although they were born on television. And then there are Netflix or Amazon Prime productions that are distributed online but made in the old TV mode. House of Cards (Netflix) is so carefully plotted and focus-group tested that it feels like it was written by algorithm. (Some critics argue that it basically was.)

As HBO and AMC corner the market on high-minded dramas, Viceland is going the other way. It got its start on the Internet—early Vice Media documentaries ran on the website VBS.tv—and it continues to make room, within its corporate structure, for Internet-y modes of production. It may be a brilliant innovation or a cynical co-optation, but either way, it makes for lively television. While remaking Nirvanna, Johnson and McCarrol were rarely asked to explain their jokes or clear their risky gambits with upper management. And since the fledging network is producing a ton of programming at a fast pace, it has neither the time nor the budget to over-curate its work. “Vice has so many balls in the air,” says Johnson “that it just can’t manage every show in the nit-picky way that a big network would.”

That hands-off approach comes across in the storytelling. Viceland documentaries have the production value of prestige television, but the subject matter is risky, excessive, and sometimes raunchy. In a 2016 interview with Toronto Life, Matty Matheson, a chef and star of the Viceland food series Dead Set on Life, perfectly described his show’s appeal: “I’m a big guy doing funny shit.” That’s an Internet premise if I’ve ever heard one—and frankly, it’s the same premise as another Viceland food show, Fuck, That’s Delicious, staring rapper Action Bronson.

Like these series, Nirvanna is fun to watch because it was so clearly fun to make. It’s less fixated on excess (i.e. sex, drugs, and bacon) than many Viceland productions, but it has the same impulsiveness. The show is an antidote to those high-concept HBO dramas in which the dialogue borders on psychobabble (True Detective) or the plot machinery is so lumbering you can hear it creak (The Night Of).

Most people are at their goofy best when hanging with their friends, and that’s basically what Johnson and McCarrol are doing. The show feels like a throwback to a cheerier, amateur moment in Internet history, before huge swaths of cyberspace had been colonized by bots, big data, and trolls. Its pleasure is in watching two best friends perform their friendship in real time.