The Way We Shame | The Walrus
Skip to content 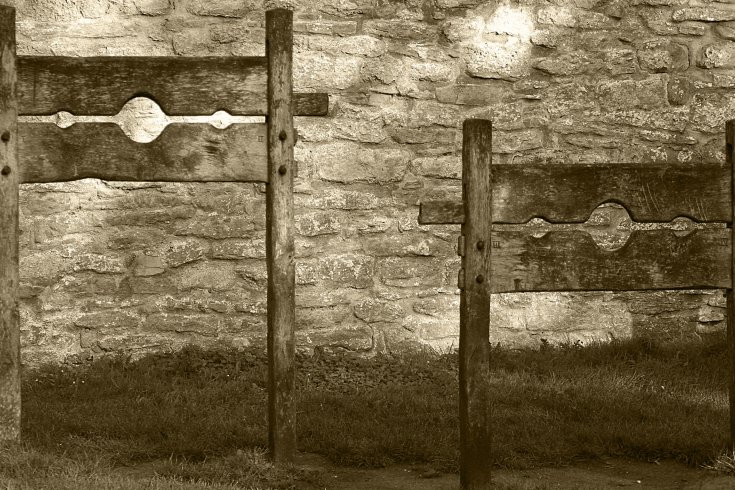 Ottawa, 1881. When he married Margaret Dougherty, a woman twenty years his junior, James Wetherill was sixty-five, a widowed livestock dealer, hard and mean by reputation. The marriage “appeared to have been one of convenience,” a newspaper reported. He needed a housekeeper. She needed a house.

The neighbours disapproved: of the marriage bargain, of the age gap, of the groom’s miserly ways. Around dusk on the night of the wedding, small boys marched to the bride’s home, ringing bells, banging on stovepipe lengths, demanding money before they’d go away. The groom grudgingly gave a little cash, and they did go away. But this was only the opening act. At midnight, an older, rowdier, more inebriated crowd arrived. Young men shouted, cursed, broke windows. Again the ritual demand: pay us or suffer. This time, Wetherill angrily refused to pay. The men declared “they would have Wetherill outside the house.” Goaded beyond good sense, Wetherill ran outside to face his tormentors. They beat him to death.

James Wetherill played to the bitter end his part in an ancient drama. Charivari, shivaree, scampanate, katzenmusick, skimmington, rough music, serenading. Across Europe and then North America, the custom answered to a hundred names, but the rules had been consistent for generations. Let a couple make a marriage the community found inappropriate, or gain a reputation for immoral behavior, or otherwise offend the norms, and the mobs would come out to shame them. The wedding night would be ruined, the bride terrified by lewd propositions and thunderous noise, the groom forced to grovel and pay.

Had Wetherill and Dougherty the right to marry whom they please? In the statute law of Ontario they did, and the Crown laid murder charges against four men from the rowdy crowd. But the Ottawa jury refused to convict. It’s rough justice, people said: “Some sorts of crimes can only be handled by public consensus and shaming. It’s a different kind of court.”

Actually, that last quotation is not from the Ottawa of the late nineteenth century. It’s from “Michelle,” an internet vigilante in 2013. She was explaining to journalist Jon Ronson why Adria Richards, a young New York PR executive got on the wrong side of a digital mob.

Richards endured a storm of death threats and sexual insults. She did not die, or even get hurt in any physical way. But as a global social-media pariah, she experienced the kind of cyber-assassination that’s now common. Her new-media employers, inundated with hack attacks from their own community, fired her.

Shame is back. But did it ever really go away?

Folklorist Pauline Greenhill, who teaches women’s and gender studies at the University of Winnipeg, opens Make the Night Hideous, her recent study of Canadian charivari customs, with the Wetherill-Dougherty case. Greenhill assumed, like most scholars of charivari, that she was doing history, exploring nineteenth-century society and culture. But her students, she found, knew otherwise.

Officially, the law itself has moved away from the pillory and public whippings. In modern times, the law presents itself as seeking not a hot shaming but a coolly appropriate sentence that can protect society and rehabilitate the convicted. Traditional charivari, as alternative law, became, in the words of historian Bryan Palmer, “a force undermining social authority, resolutely opposed by magistrate and police” across Canada. An early bylaw of Kingston, Ontario, sought to suppress “the useless and foolish custom called the charivari.” During the nineteenth century, enhanced policing and disorderly conduct charges helped kill off such folk traditions. But now they are being reinvented in digital form: Just as Uber is challenging the traditional regulated taxi industry, digital shaming seems to be undermining formal authority and restoring regulatory power to the mob.

But the mob is unpredictable, and can savage both accuser and accused alike. Consider Adria Richards. In 2013, she Twitter-shamed two men at a Santa Clara, California, tech conference over a rude joke she’d overheard, unleashing an online torrent against them. When one, Hank, reported that her tweet had provoked his employer into firing him, the Internet abruptly turned on her: prudish, controlling, humourless, destroying a man’s career over nothing serious. Her employer in turn fired her. Both firings appear to be absurd overreactions.

Enforcement of employment standards could have addressed or prevented both. Hank and Adria worked for new-media enterprises, but they were in new-economy workplaces as well, based on contract labour, precarity, workers without safeguards. The joblessness of Hank and Adria says more about the arbitrary power of employers to abuse workers than about digital mobs. Some well-enforced labour market regulations, and the Adria Richards story would be not much more than a Twitter-storm.

Pauline Greenhill has another charivari story; but in this episode, community justice was tempered by formal regulation. In October 1917, a twenty-one-year-old Springfield, Nova Scotia, woman named Irene V. was seen in the company of a man in his fifties—this while her husband was fighting with the Canadian forces in Europe. Mrs. Conn, a neighbour, said she heard the older man call Irene his “wife.”

“I do not approve of it,” she said later. “I thought it would be a good thing to serenade him.”

That evening, six men appeared at Irene’s door. There was “a disorderly and riotous demonstration:” ringing of bells, firing of shotguns and rifles, shouted insults and demands. A traditional charivari.

Irene was having nothing of it. With the help of her lawyer step-father, she sued the men for defaming “her character as a chaste married woman.” In the law court, unlike the court of public opinion, she won her case. The men appealed, and she won again. Mr. V. returned from the war and they moved away; their marriage endured.

“She was a feminist hero to me—a woman who fought back and who won,” said Greenhill. Her courtroom victory may point the way forward for modern shamees tired of having their reputations destroyed on Twitter without anything approaching due process.

Christopher Moore is a Toronto-based writer and historian.