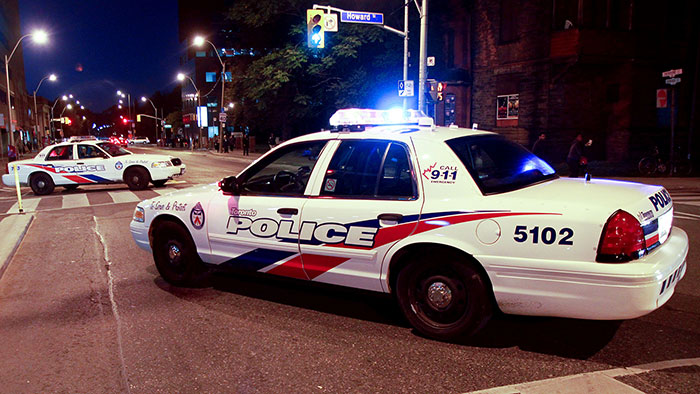 Much of the media coverage of the release last week of Frank Iacobucci’s groundbreaking report on Toronto Police Service encounters with persons in crisis, focused on the hardware of law enforcement. The retired Supreme Court justice, hired a year ago by Toronto chief Bill Blair in the wake of the shocking shooting death of eighteen-year-old Sammy Yatim, had a recommendation that captured every news editor’s attention: Iacobucci suggested the TPS, which has been pushing (unsuccessfully) for expanded use of tasers, “consider” a closely supervised pilot project with these controversial devices, with the proviso that any officers equipped with the weapons receive additional mental health training, get fitted with lapel cameras, and be subjected to special scrutiny.

Yet the most significant, and somewhat under-reported, parts of Iacobucci’s impressive work involve institutional software: police culture, the effectiveness of expanded training on dealing with people in crisis, and subtle but hugely important shifts in the way police respond to calls involving such individuals.

De-escalation is pivotal, because people in the throes of a mental health crisis may be unable to process standard-issue tactical police commands—“Stop!” “Drop the weapon!” etc. Indeed, according to lawyer Peter Rosenthal—who represented the family of Michael Eligon at last fall’s inquest into police shootings of three emotionally disturbed people—the single most important recommendation in the report is that the training of officers include “the need to adjust communication styles when a person does not understand or cannot comply with instructions.”

Echoing the findings of the coroner’s jury into those three shooting deaths—including that of Eligon, who was killed by police in February 2012, after walking out of a hospital ER—Iacobucci urged the TPS to adopt all the core elements of Memphis’s “crisis intervention team” model, which I explain in the current issue of The Walrus. That approach has been adopted in 2,700 jurisdictions in the US, as well as a handful of Canadian cities like Hamilton.

Implementing this far-reaching change will entail nothing less than upending the culture of a massive, complex organization steeped in its own habits, rules, and outlooks. In Memphis, a quarter of all front line officers have received forty-hour intensive training sessions on how to respond to disturbed people and de-escalate crisis situations. They also have the authority to take charge of crisis calls, as well as use certain weapons, including tasers and impact guns.

In Toronto, that ratio would translate to about 1,300 officers. The funds required to deliver training at that scale are going to be considerable, and will test the Toronto Police Service Board’s willingness to ensure that the necessary resources are allocated. (Iacobucci reports that “stakeholders”—one can guess who—raised concerns about “resources” and the impact on public safety of having so many officers off duty for training.) Prospective CIT officers need to be recruited and screened to ensure suitability for the assignment. Then they have to build the trust of their fellow officers, something that will happen slowly, and likely only after many front line cops have observed their specially trained colleagues respond to emergency calls and deploy their expertise in volatile, fast-moving situations. We’re talking years.

Now consider this: at present, the TPS has five so-called “mobile crisis intervention teams” consisting of a specially trained constable riding with a psychiatric nurse (two more units are coming on stream). The service is available only for part of the day, and the units aren’t first responders because they include civilians. According to Iacobucci’s report, which urges the TPS to make the MCIT’s available around the clock, these teams respond to 11 percent of all calls involving people suspected of having an emotional disturbance. In other words, officers with no specialized mental health training handle 89 percent of the 20,000 annual cases where police have to respond to someone in crisis—i.e., almost 18,000 individuals (some of them repeats).

Eligon was one. Yatim, another.

Now think about those big numbers in light of Iacobucci’s findings about mental health within the police service. Citing several US studies, he points out that police officers “commonly” suffer from psychological issues, resulting in a high incidence of post-traumatic stress disorder, alcohol abuse, and domestic violence, as well as a significantly elevated incidence of suicide relative to the general population. As many as a third of police officers exposed to a work-related traumatic incident develop “complex psychological issues that can interfere with their duties and responsibilities as a police officer.”

Yet, Iacobucci reported that only 614 members of the TPS—11 percent of a force with 5,500 uniformed officers—currently participate in the organization’s “psychological wellness program,” which is geared at cops working emotionally taxing beats such as child exploitation, collision reconstruction, and narcotics. Most of those officers, Iacobucci observed, participated in the programs because they had to.

In other words, the TPS, like many law enforcement agencies, has a culture marked by large-scale denial of the existence of corrosive work-related stress. And at the same time, thousands of calls involving emotionally disturbed people, including the most volatile cases, are handled by officers with minimal training.

To me, the gravest question has to do with the overlap: what happens when a stressed out, overcompensating officer encounters someone who is psychologically unstable, delusional, and possibly armed?

There but for the grace of God, etc.? I don’t think so.

Because tasers and lapel cameras offer quick solutions with superficially measurable outcomes, whereas culture change is slow and nebulous, it’s not difficult to predict which will attract the attention of a highly media-conscious police service. While Iacobucci’s efforts were generally praised, some critics argued that the taser/lapel camera pilot project may send the TPS off in an entirely different direction than the compassionate law enforcement agency that Iacobucci envisions.

Tasers, says Rosenthal, “won’t be used in place of firearms, and will be used in many other situations, especially against people who are in an emotional crisis. Tasers are dangerous weapons whose dangers are underestimated by many officers. Expanding their use, even in a pilot project, is a mistake that will cause harm.”

Mennonite peace activist Doug Johnston Hatlem had an even more critical reaction: “We need officers to have fewer weapons, we need fewer officers at the scene, a decrease in the police budget and pay scale, specific dismissals for abusive behaviours, less command and control at the scene of an incident, fewer calls by Toronto citizens to police, and much more of a non-police, community response to such incidents.”

Hatlem is an outreach worker at The Sanctuary, a downtown Toronto mission that offers refuge and health/counselling services to homeless people, addicts, and others. On the evening of the release of Iacobucci’s report, I dropped by The Sanctuary to watch a pre-screening of What World Do You Live In?, a forthcoming documentary about police violence in Toronto towards marginalized populations, such as the homeless, alcoholics, and Aboriginals. Eligon’s case, and the reaction to it, figures prominently, as do some of the G20 arrests from 2010. Hatlem is featured in the documentary, and several of the people who shared their experiences with filmmaker Rebecca Garrett were in the audience. (Garrett has submitted the film to several festivals and plans to screen it in the fall.)

Their stories—beatings, ongoing harassment, trumped-up charges, and the occasional death (e.g., Chris Gardian, an alcoholic man who died after being arrested by several Toronto cops behind a store; no officer was charged)—are horrific and disturbing, but point to something lurking at the edges of the Iacobucci report.

While Iacobucci’s focus is on police encounters with emotionally disturbed people, Hatlem argues that other vulnerable individuals—e.g., street people—are often singled out for rough treatment. In other words, the culture shift that Iacobucci proposes mustn’t be limited to situations involving people in the grips of a psychological crisis.

Iacobucci seems keenly aware of the constraints: in his report, and his comments to the media, he called on the federal and provincial governments, hospital ERs, and social service organizations to work together to improve all the elements of the mental health/addiction system, with an eye to preventing the sorts of crises that lead to 911 calls and the dispatching of police officers.

The fix, in other words, is very broad and perhaps more complex than even Iacobucci envisioned. “This report won’t gather dust,” Blair pledged at last week’s packed press conference. “This report will gather momentum.”

The question, of course, will be whether that momentum is directed at buying new hardware, or improving the existing software.