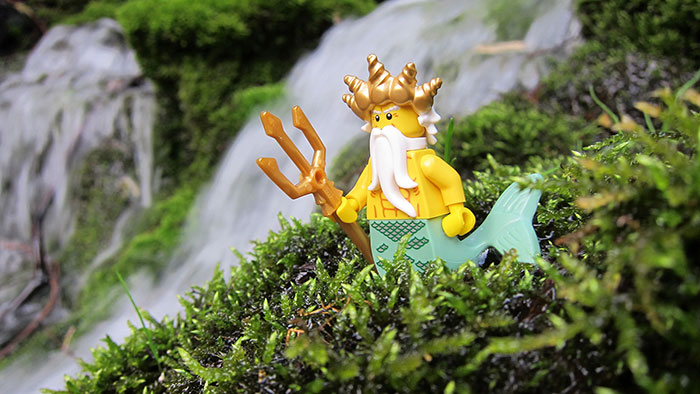 Thousands and thousands of Lego bricks and minifigures in near perfect condition have been washing up on the Cornish coast of England. They fell off the Tokio Express when a giant wave smashed into the Hamburg-based, Florida-bound cargo vessel and toppled a shipping container of mostly nautical-themed sets into the ocean. (To help visualize what happened, assemble the 1,518-piece Maersk Line Triple-E, float it in a bathtub or swimming pool, and unleash your inner Kraken.)

BBC News reported on the sea’s colourful acrylonitrile butadiene styrene bounty last week, and the story has since been picked up by newspapers, blogs, and public radio around the world. This isn’t exactly news: the Tokio Express lost its oversized toy box in 1997, and the 4.8 million pieces inside came from sets that have long since been discontinued. Nevertheless, as anyone who has ever read Robert Louis Stevenson or seen The Goonies can tell you, there is something endlessly fascinating about treasure hunting; local beach combers have been picking up vintage cutlasses, life jackets, and the occasional black octopus, to the envy of Lego fans everywhere. Couple that fascination with the enduring popularity of the brand, and you have a quirky story that screams viral. Still, the overboard bricks have been washing up on shore for seventeen years, so why have they suddenly become media darlings?

The BBC story speaks to the Lego Movie effect: The Lego Movie, which has made $247 million at the box office since February, has given the beloved construction toy a major boost, helping to make it even more popular, more valuable, and more ubiquitous than it was a short time ago. (The film’s release also happened to coincide with the Lego Group overtaking Mattel as the world’s largest toymaker.)

The Lego Movie underscores what architects, designers, and artists of all ages have known for years: that Lego is something of a lingua franca, both in and out of the playroom and studio.

Among the more overt examples of this is Greenpeace’s Everything Is Not Awesome, in which an oil spill drowns an arctic landscape, complete with an Inuit fisherman and a stranded polar bear. Ostensibly, the 1:45-minute short is meant to pressure the Lego Group to abandon its Shell Oil–themed sets, which Greenpeace argues warps the “unspoilt wilderness” of impressionable young minds about the consequences of drilling and the seriousness of climate change. (Greenpeace implies such sets are new, though Shell Oil pieces have been a part of the Danish company’s City line since 1966.) In fact, the campaign is less about toys and kids and more about communicating in a universally understood register, in order to comment on a much larger, more contentious issue; the video has been viewed over 5 million times on YouTube since July 8.

Lego itself is a product of oil. When that wave hit the Tokio Express way back in 1997, it was like throwing 5 million grains of plastic rice at a wedding. The properties that make the ABS bricks durable family heirlooms also make them indestructible choking hazards for marine wildlife, particularly birds. Floating in the ocean, washing up on shore, or plaguing sea gulls, they are here for the long haul. So, it would seem, is the omnipresence of Lego, with a movie sequel planned for 2017 and who knows how many coffee books, YouTube videos, art installations, and must-have sets in the meantime.