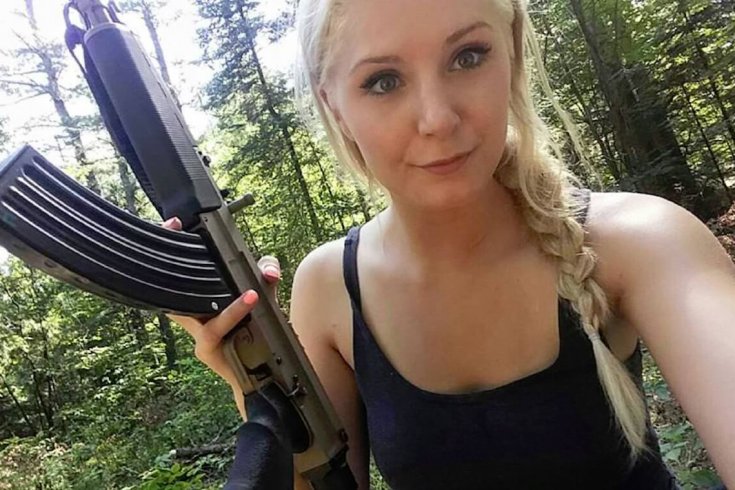 On July 21, the far-right provocateur and former Rebel Media personality Lauren Southern announced that Patreon, the crowdfunding platform, had deleted her account. Over the past couple of years, Southern—a self-styled millennial version of Ann Coulter—has built a social media following with a toolkit favoured by the alt-right: titillating trolls, mocking feminists and trans-rights activists, stoking fears about immigrants (especially Muslims), and lionizing Donald Trump as a political saviour. Yet Southern’s support for Defend Europe, the anti-immigrant campaign devoted to disrupting migrant rescue operations, was, for Patreon, a bridge too far. In an email to Southern, the company noted her activities were “likely to cause loss of life.”

In her response, a seven-and-a-half minute YouTube video that has now been viewed nearly a half-million times, Southern painted herself as an heroic advocate of free speech. “I’m being banned, censored, and attacked everywhere I go,” she protested. “The entire establishment—corporations, government, media—is against me.” Within hours of Patreon’s decision, Southern’s new crowdfunding page was up and running. Within days, she had added several thousand followers on Twitter and Youtube. It became clear that Patreon had burnished, not tarnished, Southern’s brand.

The entire episode was a singular instance of the alt-right’s mastery at reframing political narratives. Southern took what, under normal circumstances, would have been devastating criticism—i.e. exhibiting behavior that was “likely to cause the loss of life”—and turned it into a credential, a badge of honour. It’s precisely such tactics that have stymied mainstream journalists. How do you report on virulent new strains of nativism and know-nothingism when any attention paid to the far right provides it with valuable earned media and contributes to the marketing of hatred?

A version of this played out with Hannah Thibedeau’s bungled interview with Gavin McInnes on CBC’s “Power and Politics” in early July. McInnes was invited in his capacity as the founder of the Proud Boys, the Western chauvinist organization who “refuse to apologize for inventing the modern world.” The interview was a disaster, with Thibedeau ill-equipped to handle McInnes, who lashed about with impunity. He defended the genocidal policies of Edward Cornwallis, denouncing the “abhorrent” decision to suspend five military servicemen who disrupted a Mi’kmaq gathering on Canada Day. But while the on-air exchange was bad, its after-life was, in some ways, worse. On the Ezra Levant Show, the Rebel Media impresario turned the CBC’s segment into a vehicle for a full-spectrum attack on CBC’s ideological insularity. The CBC had perhaps sought a “balanced” perspective on the Proud Boys, but by the time this material reached the far-right media consumer, it had become further evidence of the impotence of the political and cultural establishment.

Just how are we to deal with these people? Do we engage or do we ignore them and hope their ideas fizzle out? Does the media have a duty to educate readers in order to safeguard the larger society, ensuring that we don’t repeat past mistakes and get taken in by junk ideas? Or do we stand down, cognizant of the ways in which these defences can become a kind of auto-immune syndrome, strengthening and furthering the forces they were meant to defend against? When I put that question to the University of Toronto political science professor Clifford Orwin, he emphasized that such decisions must proceed from a careful cost-benefit analyses: Given that any critical coverage is bound to galvanize the far-right’s constituency, “the question then becomes whether they’re important enough so that you must engage with them with an eye to refuting them before other constituencies,” Orwin wrote in an email.

Prudent advice, though one wonders if we’ve completely given up on refuting the figures of the far right before their own constituencies? What would such a refutation even look like?

Imagine a 19-year-old college or university student—curious, idealistic, not yet rigidly ideological. Imagine this young girl out with friends, when—in one of those heady conversations common among enthusiastic undergraduates—a peer confronts her with arguments lifted from Southern’s recent book, Barbarians: How Baby-Boomers, Immigrants, and Islam Screwed My Generation. Later, when our inquisitive student does some Googling, she quickly finds that Southern denies the existence of rape culture, belittles Black Lives Matter, and has become an object of widespread adulation.

What our young student does not find is any serious rebuttal of Southern’s contentions. For instance, her claims in Barbarians—that “Islam’s ambition has been the destruction of Christendom … since Muhammad dreamed it up between child brides,” that “we have been fighting Islam for 1,400 years,” and that “Islam the religion is by its nature dangerous to the West,” all go unchallenged. Her assertions that immigration is destroying Western economies, and that liberal immigration policies amount to a “dilution of what makes our countries recognizable, pure, and simple,” go untested. Her characterization of Adolph Hitler as an Islamophilic Social Justice Warrior is unopposed. Perhaps our young student will reject these conclusions, perhaps not. Either way, she will have had no help from the supposedly responsible voices in the mainstream media. Our culture has left her no breadcrumbs leading back to sanity.

When Southern’s Barbarians was published by Rebel Media last year, the mainstream press reserved judgment, for reasons that are now obvious: such a review would risk elevating the class clown to an intellectual peer, someone worthy of serious engagement, and even a negative review would only bolster her case. Another reason, perhaps, relates to the online trolling that would greet the publication and reviewer who called the book what it is: an extravagantly boring retread of Mark Steyn and Pat Buchanan and Ann Coulter. The chapter on education reads like Allan Bloom’s Closing of the American Mind rewritten by his least promising student. The book deserves a scathing review, not for its politics or its pornographic hatred of Muslims, but for a tedium that borders on necrosis.

Yet the refusal to engage with this material, while par for the course among legacy media outlets—indeed, The Chicago Review of Books responded to Simon and Schuster’s decision to publish Milo Yiannopoulos’s Dangerous by refusing to review any new book by the publisher—amounts to an abdication of basic journalistic responsibility, particularly to the young. Self-censorship on the left is far a more genuine cultural threat than the fake censorship constantly bemoaned on the right (Jordan Peterson very much included). Southern is now a part of our literary culture, and pretending she does not exist is not a sound strategy for containing the atavistic energy she represents.

What would a sound strategy look like? For the sake of argument, let’s assume that our engagements with the far right are not mere exercises in self-directed ego gratification, but are intended to refute the fallacies nurtured by the movement itself. Such (wisely chosen) engagements, on screen or in print, should be informed by an understanding of how the movement scores rhetorical points.

The first step is to neutralize the ubiquitous refrain that “the media” is in league to silence, censor, or suppress their views. The Southerns of this world must be given airtime, not only to put an end to their bleating about censorship, but, more importantly, because their own opinions are an invaluable resource for exposing the intellectual bankruptcy of their populist and nativist fantasies. Their audience must be reminded, for instance, that the victims of Islamic terrorism are, overwhelmingly, other Muslims. They must be forced to confront the economic data proving that immigration is an economic boon, and that arguments for Teutonic purity undergirded not only the eugenicist movement and Holocaust but also apartheid, Jim Crow, and slavery itself. The solution isn’t to suppress this speech, but to frame their arguments within their own vile lineage.

Of course, many media darlings of the far-right claim to despise Nazism, and view any comparison with Hitler as proof that the media is interested only in slandering them. Rather than getting caught up in debates over fine-grained distinctions between the “alt-right” and the “alt-light” and the “new right,” we should emphasize that the racially inflected grievance and resentment shared by all of these groups was constitutive of Nazism’s political affect. Most major players in the far-right disavow “Hitler” as a signifier while working to inflame racial antipathy and stoking fears about how immigrants and sexual minorities are polluting the purity of our society. Figures on the far-right should be forced to explain how their use of these tactics differs from the Führer they claim to detest.

We should not caricature the far-right, but we should be more attentive to the ways in which our own views are easily parodied and delegitimized by our opponents, and how we have been partially complicit in that delegitimization. We must dial back the moral outrage—not because that outrage is misplaced, but because nothing moistens the collective loins of the far right quite like the shriek of leftist indignation. Let’s deprive them of the pleasure.

Above all, the key to opposing rightwing populism will lie in exploiting the movement’s own internal contradictions, none of which is more glaring than their “rebel” pose. We must emphasize that there is absolutely nothing “rebellious” about the form of “journalism” practiced by the far right. One suspects that not even Southern and McInnes would seriously defend the notion that their brand of political entertainment advances the basic cause of journalism: the discovery and
dissemination of the truth.

But they do seem to believe that there is something “rebellious” about their entertainment, and on that point they should be corrected. The overt purpose of their efforts—to celebrate the leader, help consolidate his dominance, scapegoat the powerless, and genuflect before power—makes a mockery of the rebel spirit. These ersatz rebels assume the posture and rhetoric of mavericks while operating as lickspittles and apologists for a plutocrat. For those whose message and interests are in lock-step with policy emerging from the U.S. Executive, the correct term is not “rebel” but “sheep.”

What’s certain, at this point, is that the Canadian media is adrift when it comes to dealing with the far right. But there’s no longer any excuse for attitudes that prevent engagement with the movement, incapacitate centrist voices and leave the right unchecked. The recent violence surrounding the “Unite the Right” movement in Charlottesville, for example, comes as a stark reminder that we are currently engaged in the next phase of an ongoing culture war, the stakes of which are the viability of liberal democratic ideals.

Levant, Southern, and McInnes are of one voice in disavowing the violence, while trafficking in (and profiting from) the resentment that produced it. Their entertainments confuse conspiratorial fantasy for education, race hatred for cultural tradition, and bigotry for strength. They appeal to our most barbaric selves, and the key to fighting back will not lie in pretending their noxious views don’t exist.