The Thin Blue Line, Then and Now | The Walrus
Skip to content 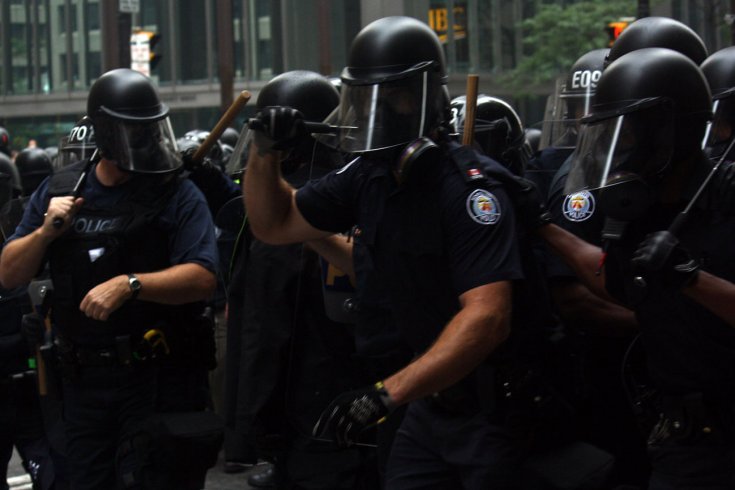 katerkate / [cc+nc+nd] Police in Toronto, photographed during the G20 summit of 2010.

In the December 2014 edition of The Walrus, author John Lorinc argued that “We live in a world of mission creep, a world where the lines that once separated local policing and national security have become profoundly entangled. . . . Insular municipal police departments have inadvertently found themselves with the tools of war, and are using them to guarantee domestic tranquility.”

Following on last year’s public protests in Ferguson, Missouri, such concerns have grown all across North America. Fear that our police forces have become “militarized” is now widespread.

The visuals certainly can be off-putting: police officers wearing heavy ballistic body armour and helmets, carrying military assault rifles, and riding in armoured vehicles of the type used in Iraq and Afghanistan. Critics also focus on tactical officers (i.e., SWAT teams) responding to apparently non-violent crimes. In a 2014 article entitled “Do Cops Really Need Tanks to Keep Us Safe? ” ACLU Center for Justice lawyer Kara Dansky wrote: “As [US] federal officials and legislators continue their examination into the militarization of policing, they should take note that the people have spoken: their constituents do not want their police to treat their neighborhoods like war zones.”

As a thirty-six-year Ontario police veteran who served in various roles—including tactical response and senior command positions—I too have worried that we are “over-gunning” our policing strategies in some situations. The proliferation of tactical-style uniforms on front-line patrol officers (with bloused pants, high boots, numerous pockets bulging with equipment) makes officers look more ominous than the traditional police beat-officer uniform of bygone days.

But it is important to remember that the threats have changed, too. As a young cop in the 1970s, I seldom encountered a criminal suspect armed with a handgun or an assault rifle. The odd .22-calibre rifle or shotgun was about as bad as it got. Sadly, that’s changed.

Four decades ago, the word “gang” referred mostly to groups of hairy thugs who rode into town on motorcycles, got drunk, and had fist fights—generally among themselves. Sure, they engaged in other criminal enterprises. But they rarely blew each other up or attacked journalists (such as Journal de Montreal reporter Michel Auger, shot six times in 2000). Their weapons typically were baseball bats and knives. Here in Canada, we saw Bloods and Crips as the stuff of Hollywood.

Police were dressed and equipped accordingly. Body armor was rare before the 1980s: the officers who had it usually purchased it out of pocket; and even then, it was worn invisibly under the uniform shirt.

Police back then carried revolvers. Some lever-action deer rifles and shotguns were accessible in station houses under lock and key, but they seldom saw the light of day except in the most dire of circumstances. In the United States, SWAT teams (the acronym stands for “Special Weapons And Tactics”) began forming in big cities in the 1960s and 1970s; but very few mid-sized Canadian jurisdictions employed them until the late 1990s.

In my day, the odd major police department might acquire an outdated armoured vehicle that some security company had donated to the cause. But proper tactical vehicles were a rarity until more recent times. (The tactical team that I was a part of in the 1980s actually used an old converted bread truck that resembled a huge, under-powered, cube-shaped tin can.)

Riot squads—known as “Public Order Units” (POUs)—consisted of poorly trained and equipped uniformed patrol officers who were issued old motorcycle helmets and long wooden batons. They had primitive shields and little or no body padding. They weren’t armed with rubber bullets or bean-bag guns, and deployed as a unit only if a full-fledged fracas was brewing.

Then things changed. As organized left-wing protests grew more common in North America in the 1990s and the 2000s, the police response became more heavy-handed. Officers in regular uniforms (the so-called “soft hats”) remained on the front lines. But if things got too ugly, fully-kitted POU officers would arrive and take over, usually with tactical officer support.

In the post-9/11 era, the trend toward more menacing outfits and equipment while on daily patrol has continued, which is why many police officers today look like Ninja Turtles. Heavier bullet-proof vests are more commonly worn outside the uniform shirt, bearing pockets for easy access to equipment. Duty belts around waists bristle with semi-automatic pistols, Tasers, collapsible batons, disposable gloves, flexible handcuffs, and more. (I won’t even get into shaved heads, goatees, tattoos, and earrings, which I call the Pirates of Penzance look—but I am old school.) Helmets, shields, assault rifles, and armoured vehicles seem to appear much earlier in street encounters. At many protests, they are present as part of the police side’s starting lineup.

In my day, an armed police encounter with a suspect often would involve a cop talking a known local thug into throwing his gun out the window and walking out to chat. But now, any crime scene involving a gun attracts multiple officers and a full tactical team, not to mention negotiators, tanks, helicopters, barking police dogs, drones, and even robots.

In the United States, where there often are multiple police departments within a single county, SWAT teams have proliferated even more. Small departments with four full-time officers might have access to a helicopter, SWAT paraphernalia, and an armored vehicle. What makes the phenomenon even more worrying is that many of these police departments are not bound by clearly defined operating procedure and equipment standards—so the local police chief can escalate his response as he or she sees fit.

Over the past several years, surplus US military equipment and vehicles—as well as special funding allocations—have been granted to law enforcement agencies. (This is not currently a practice in Canada, which is why armoured fighting vehicles do not make regular appearances on Canadian streets.) As a New York Times reporter wrote last year, “During the Obama administration, according to Pentagon data, police departments have received tens of thousands of machine guns; nearly 200,000 ammunition magazines; thousands of pieces of camouflage and night-vision equipment; and hundreds of silencers, armored cars and aircraft.”

Law enforcement officials not only defend all of this as a means to keep police safe, they typically will argue that it keeps everyone else safer, too. While speaking of the police response to the Ferguson protests, for instance, St. Louis County Police Colonel Jon Belmar said: “I think we have to look at this from another vantage point. . . . Had we not had the ability to protect officers with those vehicles, I am afraid that we would have to engage people with our own gun ire. I really think having the armour gave us the ability not to have pulled one trigger . . . I think the military uses armour to be able to provide an offensive force, and police departments use trucks like that so they don’t have to.”

I can see why any rank-and-file police officer would agree with this statement. Gang culture, the proliferation of illegal weapons, and terrorism all have contributed to a more dangerous environment for police. Is it wrong that officers would want access to technology that protects them when they’re doing their jobs? Should governments stand in the way of their safety and security merely because the optics are politically unattractive? I think not.

What it comes down to are the questions of when, why, and how tactical units and equipment are used. On one end of the scale are the cops who go into schools to communicate safety messages to wee children. Obviously, they don’t need armoured vehicles, ballistic helmets, and stun grenades to do that. On the other end of the continuum are the police who track down wanted terrorists. Those are the no-brainer scenarios. It is the grey areas of police work that fall between those extremes where police commanders must apply their common sense.

This includes scenarios such as public demonstrations. Depending on intelligence about what threats and/or weapons may exist within a mobilized crowd, police leaders will have to decide what resources to deploy visibly. The initial decision is important: If commanders start with POUs and SWAT teams, it’s hard to scale back even if threats do not materialize. If appropriate, regular uniformed officers dressed in normal attire and equipment should constitute the starting position, followed by the gradual introduction of special units and hardware if and when they become necessary.

Armored vehicles are seen as especially menacing. Why have them front and centre from the very start of a normal protest? Commanders should keep these vehicles and the special tactical units a safe distance away, and bring them out only if required. The point of such vehicles is to rescue officers and civilians in the line of fire, or to protect officers from potentially harmful projectiles and incendiary objects. Some situations may require that armored vehicles be deployed in the first instance. But those situations are the exception, not the rule.

The same logic applies to SWAT teams responding to police calls. Many years ago, these teams were underutilized—and many officers in my day might have been saved if they’d had SWAT backup when approaching a dangerous suspect. But these days, the pendulum has swung in the other direction: I believe that committed police officers who are properly trained, project a professional image, and treat people fairly can safely handle most challenges they face.

All of that said, the Canadian public should appreciate the risks associated with policing. As I type these words, I’m mourning yet another police officer slain in an act of senseless murder—RCMP constable David Wynn, who was fatally shot during an encounter with a suspected car thief at an Alberta casino. It is tragedies such as this that encourage police officers to use every tool at their disposal to protect themselves from society’s criminals.

Christopher D. Lewis served in various uniformed, investigative, tactical operations, and command positions across Ontario during his thirty-six-year career with the Ontario Provincial Police. He retired as OPP Commissioner in 2014.