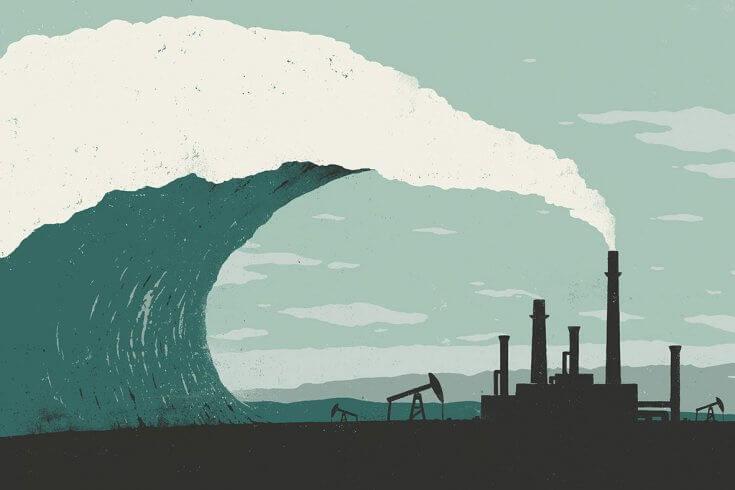 This Changes Everything: Capitalism vs. the Climate
Naomi Klein

In 2012, Gary Stix, a senior editor at Scientific American, penned a kind of apology. Six years prior, he had assembled a special issue of the magazine devoted to climate change, with a focus on cutting-edge low-emission technologies. Looking back, though, he confessed an error: he had ignored the importance of nurturing the political conditions that would allow those innovations to flourish. “If we are ever to cope with climate change in any fundamental way, radical solutions on the social side are where we must focus,” Stix wrote. “The relative efficiency of the next generation of solar cells is trivial by comparison.”

As Naomi Klein argues in her searing, encyclopedic, and radical new book, This Changes Everything: Capitalism vs. the Climate, it’s easier to pin our hopes on half-baked technological fixes than to transform the way we live. Yet the way we live is the problem. Despite their “beyond petroleum” boosterism, business interests and messianic billionaires like Richard Branson won’t save us. Neither, Klein warns, will so-called Big Green organizations such as the Nature Conservancy and the Environmental Defense Fund. Some green non-profits take funding directly from the fossil-fuel industry, or partner with the very sector they are supposed to be battling, providing their corporate bedfellows with an invaluable do-gooder veneer. In Klein’s telling, only ordinary people can save the day, and there’s only one task worthy of our efforts: we must rebuild society from the bottom up.

Such a perspective is vintage Klein, who became a chronicler of, and mentor to, the turn-of-the-millennium global-justice movement with her bestseller No Logo: Taking Aim at the Brand Bullies (1999). She sees climate change as an opportunity to unite the long-fragmented left, as many had hoped Occupy Wall Street would. By putting all of us at risk, the fossil-fuel industry offers the common enemy and moral clarity required to trigger a revolution; in fact, a global ecological insurgency is already on the rise. Klein’s aim is to focus its attention on the true root of our predicament—capitalism.

Our economy, she observes, is bound to an “extractivist” mindset—a “nonreciprocal, dominance-based relationship” with the environment. If we accept the overwhelming scientific consensus on climate change, there is simply no way to reconcile our current rates of fossil-fuel consumption with our imperative to stop catastrophic levels of warming. Instead of devising ever-riskier ways to access oil and gas (think fracking, deepwater drilling, and tar sands extraction), we need to embrace a renewable energy system that leaves carbon in the ground. This means oil companies will have to forgo trillions of dollars in future earnings.

Convincing them to do so won’t be easy. As Klein’s The Shock Doctrine: The Rise of Disaster Capitalism (2007) astutely predicted, businesses would rather cash in on the climate crisis than relinquish revenue. Corporations don’t necessarily dispute the basic science—the accounting firm PricewaterhouseCoopers, for example, published a report in 2012 warning that several degrees of warming are imminent—they just aren’t all that concerned. “Expanded business opportunities are likely to arise as consumer behavior and needs change in response to climate change,” muses a report from weapons giant Raytheon. With increased instability around the bend, the rich are readying themselves with private compounds and disaster-mitigation services. This indicates that climate change is not the great equalizer many environmentalists initially believed it to be. Historically, the privileged West has been responsible for the majority of global emissions, but the world’s poor will bear the brunt of rising seawater, transformed weather patterns, and more frequent natural disasters.

At the same time, the right wing has launched an enormously successful misinformation campaign, pushing the industry-funded think-tank line that global warming is a hoax and a conspiracy. In one fascinating chapter, Klein reports from a conservative conference where attendees call climate change a Trojan horse for “global wealth redistribution” and “green communitarianism.” Counterintuitively, she points out, these ideologues recognize a truth that liberals, centrists, and technocrats refuse to face: “The deniers get plenty of the details wrong…but when it comes to the scope and depth of change required to avert catastrophe, they are right on the money.”

In The Shock Doctrine, Klein described how the elite exploit crises—both real and imagined—to advance self-serving policies. By meticulously detailing the “scope and depth of change required,” This Changes Everything represents an inversion of that thesis, or what Klein calls a “people’s shock”—an attempt to help the public use the climate crisis to build a better future. This means that, just as climate-change deniers fear, green communitarianism and global wealth redistribution really are our best defences against ecological ruin and escalating inequality.

Grassroots organizers are already making headway in this direction—stopping new coal plants from being built, winning fracking bans, blocking pipelines, and forcing institutions to divest themselves of fossil-fuel investments. The book’s chief failing is that it can feel overlong; a manifesto need not be comprehensive to be effective. But when Klein profiles the global climate-justice movement—a constellation of struggles she dubs Blockadia—the narrative picks up emotional steam, particularly in the sections devoted to Indigenous movements such as Idle No More.

While This Changes Everything is ostensibly about climate change, it is also a story about activism—both a celebration and a critique of existing political movements. As well, it provides a theory of social change that is occasionally at odds with ideas Klein herself once espoused. After the atrocities of the Soviet Union and the betrayals of centre-left political parties, many committed idealists have turned away from statist, hierarchical models of organizing; and Klein cheers the grassroots origins of Blockadia, contrasting it favourably with the Big Green groups that have chosen the corporate path.

Then, in an intriguing aside, she finds fault with the kinds of leaderless, Occupy-style protests she has championed over the years. “I have, in the past, strongly defended the right of young movements to their amorphous structures—whether that means rejecting identifiable leadership or eschewing programmatic demands,” she writes. “As many are coming to realize, the fetish for structurelessness, the rebellion against any kind of institutionalization, is not a luxury today’s transformative movements can afford.” Her observation rings true, but she trivializes an important point by chalking up this change of heart to her own impatience. Instead, she could have made a more substantive, compelling case for overcoming radical-left taboos against building strong organizations and taking power.

The potential of a mass movement uniting labour, Indigenous peoples, students, ranchers, and other outsiders cannot be denied. Yet such a coalition remains largely hypothetical, despite some electrifying glimpses, as in the struggle to halt the Keystone XL pipeline. And, should this coalition manifest at scale, legitimate questions remain about its prospects. Why should Blockadia turn out to be more durable than the global-justice or Occupy movements, or more impactful than prior environmental efforts? Klein doesn’t provide a wholly satisfactory answer, but she argues the individuals who make up today’s ecological vanguard are rooted in their communities, which sets them apart from the restless “summit hoppers” of yore. They are superior in other ways, too. Unlike Big Green compromisers, Blockadia is willing to say no to oil interests; unlike the Occupiers, it is willing to say yes—that is, to issuing concrete demands and articulating a positive vision.

Klein’s vision is positive, too. At a moment when past collective undertakings such as the New Deal or the Apollo program seem like political impossibilities, she favours something of more profound magnitude—“a Marshall Plan for the Earth.” We have been duped into believing we have only two options—“austerity or extraction, poisoning or poverty”—when a third way is possible. What’s more, this third way might be the key to true sustainability and an improved quality of life. Klein envisions what the French describe as “selective degrowth,” calling for shorter work hours; efficient public transportation; guaranteed basic income; and a plethora of other policies, including the kinds of community-based renewable energy projects already under way in Argentina, Denmark, and Germany.

This is a recipe, essentially, for social democracy, and as such it is not particularly novel. However, Klein breathes new life into old ideas by connecting political change with climate change. The time has come to move beyond the false dichotomy between oppressive Eastern bloc communism and rapacious free-market capitalism. Instead, we must figure out how to harness state power for the common good. Klein’s appeal for government intervention will be controversial within some of the circles that made her a leftist icon; given the ongoing collusion between politicians and oil companies, you can hardly blame young activists for their skepticism of the state. It’s easy, even after reading This Changes Everything, to list all the reasons why her approach won’t work—to see only the obstacles and not the opportunities. But Klein believes that her radical solutions can unite progressives of all stripes. Rather than enumerating our doubts, we should try to prove her right.

Astra Taylor wrote The People’s Platform , one of the Globe and Mail ’s best books of 2014.
Sébastien Thibault