The Physicist Who Thought About God | The Walrus
Skip to content 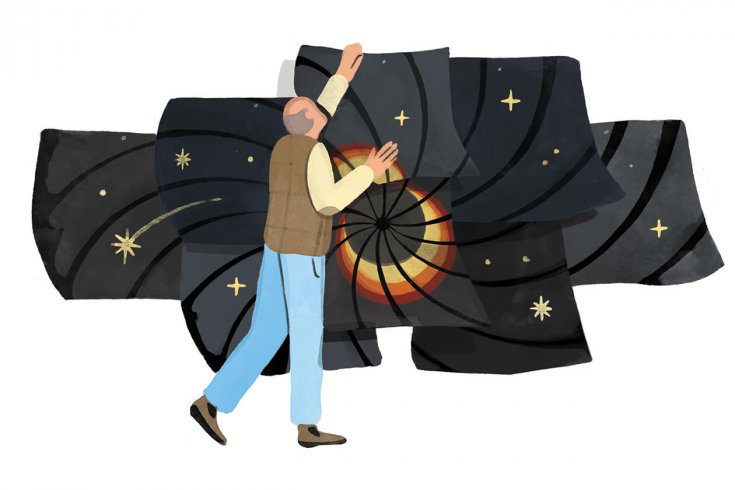 It was December 1972, I was seventeen years old, and I was attending my first physics conference. In spite of being the Sixth Texas Symposium on Relativistic Astrophysics, it was held in midtown Manhattan. I was spending the holidays in my cousin’s tiny apartment, sleeping under the grand piano that took up most of it. My teacher at Hampshire College had suggested I drop in to the conference, listen to the talks, and take the opportunity to meet people. “Don’t be shy,” he said. “If you need an icebreaker, just ask them what they are working on.”

Having practised my line on the subway, I strode into the grand hotel. The first person I met was a young Texan named Lane P. Hughston, who took me to lunch and taught me twistor theory—a radically original description of the geometry of space and time as it would be experienced by a ray of light. I’d been reading Albert Einstein’s original papers on general relativity, but I’d never seen a theory so elegant. In the following days, I met and listened to lectures by many of the leading physicists of the time—including Roger Penrose, the inventor of twistor theory, himself.

At the time, several researchers were working on black holes, which I had recently started to learn about. A black hole is created after a massive star runs out of nuclear fuel and collapses. Inside, gravity is so strong that nothing—not even light—can escape.

Over the previous decade, black holes had gone from a theoretical fantasy to a tangible reality for astronomers—evidence had begun to accumulate suggesting they really existed in our galaxy. But many questions remained. What would happen to a person who falls into one, for example? Evidence suggested they would be infinitely stretched in one dimension, while infinitely crunched in two other dimensions, until time itself stops. Stephen Hawking was also on the verge of showing that black holes can emit heat: quantum uncertainty allows the occasional photon to escape the inescapable hole. And Kip Thorne was working on a project that, in 2015, would detect the gravitational waves emitted when two black holes collide and merge.

On the last afternoon of the symposium, I noticed a man who didn’t look the part of the typical physicist. He had an Old Testament beard crowned by bright eyes, and he wore black jeans and a turtleneck. I tried my line on him, and his reply was so unusual that I remember it exactly. “My approach to research is to ask myself how I would create the universe, were I God. I’ve come to the conclusion that God could never understand calculus or, indeed, the real numbers. But I am pretty sure that God can count.” He showed me a game with an electron and a chessboard. The probability of the electron jumping between any two squares was related to the total number of ways of travelling between them. Through this game, he hoped to reduce quantum physics, concerned with the movement of particles, to a simple matter of counting. I had no idea what to think of this, so I quickly said goodbye, and in my haste, I neglected to ask his name.

Seven years later, as a new PhD visiting Stanford University, I was formally introduced to David Finkelstein, the first person to describe the inner structure of a black hole. In 1958, he had used simple mathematics to describe how something such as light travels near the hole’s surface, showing that the boundary can be crossed only one way—by photons falling in. Because of this, a black hole would appear perfectly black. Today, we call this edge of darkness the event horizon.

After lunch, Finkelstein gave the most unusual seminar I’d ever seen. He sat cross legged on a table and began in a soft voice, “I do research by asking myself how God could have created the universe…” It was then, with a great deal of embarrassment, that I recalled our first meeting.

Finkelstein published many versions of his design for the universe, which he called space-time codes, before his death in 2016. Each was a little closer to the radical simplicity he sought—laws of nature reduced to essentials.

Recently, the first photograph of a black hole and its event horizon was taken by a global network of radio telescopes, the Event Horizon Telescope. The picture, which was released in April, shows a surface beyond which there is nothing: a boundary of our knowable world. I am now convinced that the event horizon is Finkelstein’s most characteristic discovery. Looking at the phenomenon 55 million light years away, I cannot help but feel just a bit of the humility and wonderment he showed toward the universe.