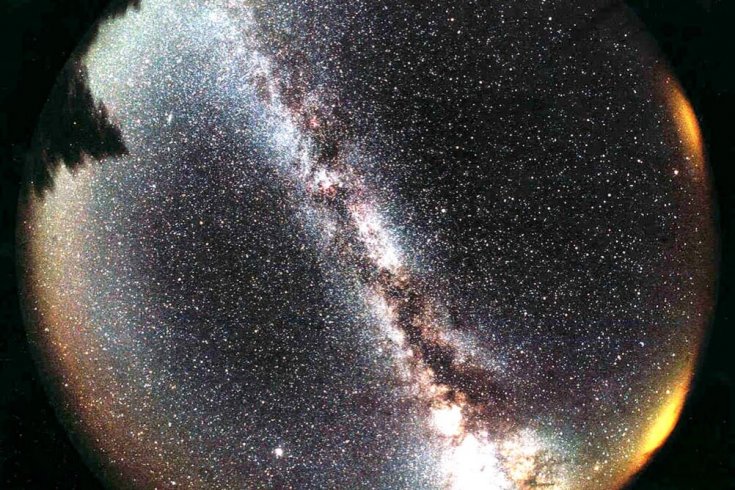 Installed on the second floor of a small building on the summit of Arizona’s Mount Graham, Guy Consolmagno is multi-tasking. He’s checking email on his laptop and listening to the Penguin Cafe Orchestra on his iPod, all the while keeping an eye on a bank of computer monitors. One floor up, nestled in a silvery-white dome, a telescope is trained on a potato-shaped chunk of rock and ice known as Haumea, which orbits the sun some six billion kilometres from Earth. Thin clouds have been drifting overhead since sundown, but if they dissipate, the telescope’s digital camera will record changes in Haumea’s brightness as it tumbles through the outer reaches of the solar system, offering Consolmagno and fellow astronomers hints about the structure and evolution of our planetary family.

All this is typical fare for a scientist. What is perhaps surprising is that Consolmagno is also a Jesuit brother, that many of his colleagues are ordained priests, and that they’re scanning the heavens with the Vatican Advanced Technology Telescope or, more affectionately, the “Pope scope.” The state-of-the-art facility is part of the Vatican Observatory, established behind St. Peter’s Basilica in 1891 by Pope Leo XIII at least partly to show that the Roman Catholic Church was not anti-science—an allegation that has persisted since Galileo was dragged before the Inquisition for claiming that the earth moves.

With his full, greying beard, Consolmagno bears at least a superficial resemblance to the great Italian astronomer. But while Consolmagno is humble and genial, Galileo was brash and argumentative, with an ego that was reportedly off the chart. Galileo’s personality surely played a part in the drama that became known as the “Galileo affair,” but if he was prone to pushing, the Church was even more prone to not bending. And now, 400 years after Galileo first aimed a telescope at the night sky, Consolmagno admits that the Vatican “screwed up.”

From “Modern Machinery at the Vatican,” Popular Mechanics, April 1905

The Vatican at Rome, rich in antiquities, is soon to receive a number of innovations in the way of modern machinery. The Pope has ordered that the Vatican observatory be equipped with wireless telegraphy, two linotype machines be installed in the Vatican and a huge dynamo in the Church of St. Peter’s for illuminating that magnificent structure. There is also some talk of installing an electric elevator for carrying visitors to the dome of the church. Besides these, Pius X has ordered two of the latest type automobiles for personal use in the Vatican gardens.

Many historians argue that the Galileo affair was, in fact, an anomaly, and that the Church, far from being hostile to science, has been one of its most ardent supporters. Throughout the Middle Ages and into the Renaissance, the Church pressed for the most precise astronomical observations, to determine the date of Easter. The Church gave us the Gregorian calendar, used virtually across the globe today. And a glance at a modern moon map reveals some thirty-five craters named for Jesuit clergymen. The Vatican hasn’t just been interested in the heavens, either; early geneticist Gregor Mendel, for example, was an Augustinian monk. Even so, some people have a hard time imagining exactly what the Vatican is looking for from its mountaintop outpost.

There have been some bizarre guesses, often involving little green men. Consolmagno recalls that a British group calling itself the Catholic Truth Society once asked him if he would write a book about the official Church teaching on aliens. “But we’ve never found any,” he says. “How could we have any teaching about them? ” (He did eventually write a forty-eight-page pamphlet for the society, in which he tackled the question “Is Jesus Christ’s redemptive sacrifice sufficient for the whole Universe? ”) Another time, the Chicago Tribune referred to the Mount Graham astronomers as “Vatican astrologers.” Consolmagno jokes that he still isn’t sure if that was a typo, or if they really thought he and his colleagues were casting horoscopes for the Pope.

In reality, astronomers have used the VATT to study everything from the dynamics of globular clusters to the nature of dark matter, publishing their findings in leading peer-reviewed journals, such as The Astrophysical Journal, whose volumes fill the cramped shelves of the telescope’s control room. Meanwhile, the facility in Italy (moved to the Pope’s summer residence in Castel Gandolfo in the 1930s) houses a large array of meteorites; Consolmagno, who studied geophysics and astronomy at MIT and then at the University of Arizona, curates the collection.

“If you had told me way back when that I would spend my life studying rocks, I would have laughed,” he says. “I mean, what could be more boring than rocks? ” Raised in the American Midwest in the ’50s and ’60s, he describes himself as a “classic Sputnik kid”; the summer before he graduated from his Jesuit-run high school, he watched Neil Armstrong walk on the moon. “But I discovered that some of these rocks are meteorites—rocks from the asteroid belt, rocks from outer space that you can hold in your hands, really cool rocks.”

Early in his academic career, though, he noticed that his colleagues, even the ones at the top of their game, seemed unhappy. “They were tremendously stressed about the need to get the grant money, to get the publications, to move up the academic ladder,” he recalls. “And that felt all wrong.” He joined the Peace Corps and taught astronomy at a university in Kenya. On weekends, he took his show on the road, and as impoverished villagers crowded around his telescope, peering excitedly at the moons of Jupiter, he decided that to be deprived of learning was just as tragic as being deprived of food or water.

Attracted to the Jesuit commitment to education and sense of being above the rat race, Consolmagno elected in 1991 to take the order’s vows of poverty, chastity, and obedience. (“Poverty and chastity, I was used to—I had been a graduate student,” he says. “But obedience was a tough one.”) Two years later, he was assigned to the Vatican Observatory, where science and faith coexist seamlessly. “It’s hard for me to imagine why anybody would think there was a conflict between the two,” Consolmagno says. “Because I grew up with no sense that either of those things had to dominate over the other.”

Indeed, the Galileo affair may be seen as a historical relic; after all, no one argues about the mechanics of the solar system anymore. Charles Darwin’s theory of evolution, on the other hand, still faces fierce resistance in some circles, as it has ever since On the Origin of Species was published 150 years ago. Even in Canada, a 2008 poll found that only 58 percent of respondents accept evolution, a figure that drops to 37 percent in Alberta. The Vatican has also found itself caught up in the controversy. Pope John Paul II embraced evolution as “more than a hypothesis,” but the current pope, Benedict XVI, has referred to the universe as an “intelligent project,” leaving some people to wonder if he is less committed to science than his predecessor.

Consolmagno has little patience for intelligent design. “Science cannot prove God, or disprove Him. He has to be assumed. If people have no other reason to believe in God than that they can’t imagine how the human eye could have evolved by itself, then their faith is very weak.” Rather than seeking affirmation of his own faith in the heavens, he explains that religion is what gives him the courage and desire to be a scientist. “Seeing the universe as God’s creation means that getting to play in the universe—which is really what a scientist does—is a way of playing with the Creator,” he says. “It’s a religious act. And it’s a very joyous act.”

Dan Falk (@danfalk) is a science journalist. His latest book is The Science of Shakespeare: A New Look at the Playwright's Universe.
Mark Saunders