The Other Trump Book | The Walrus
Skip to content 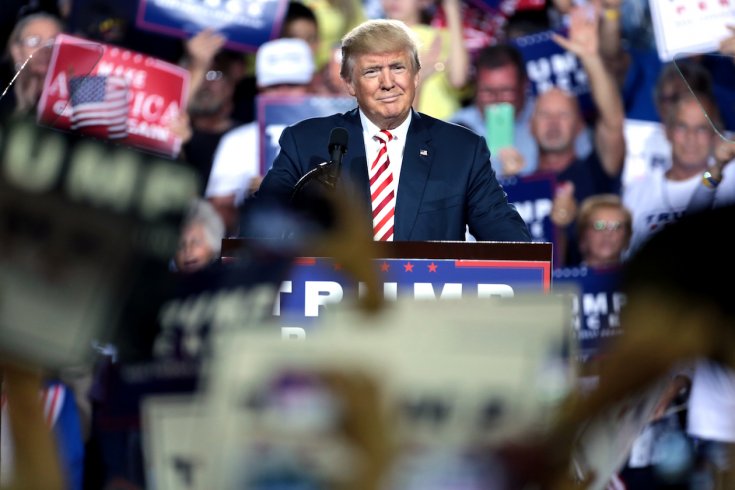 In the summer of 2000, when I was twenty-two years old and tired of answering the telephone for George Plimpton, I moved from my native New York City to Toronto to intern at an upstart newspaper called the National Post. It was clear to me that if I wanted to become a writer, it wasn’t going to happen by ordering cocktail napkins for Paris Review parties.

The Post was bankrolled by a pre-ignominious Conrad Black, whose new publication was quickly disrupting the staid Canadian media landscape. The paper set itself apart with its smart design and profusion of gossipy first-person columns that had the nutritional value of Funyons. The Post also functioned as a breeding ground for the country’s rising class of Alex P. Keatons. Its stable of political columnists was heavy on young, whip-smart, right-tilting fellows including Andrew Coyne, Alexander Rose, and Mark Steyn. It also included David Frum, a Toronto-born journalist who lived in Washington, DC, and who, only months into my tenure at the paper, would become a speechwriter for George W. Bush. Even from his new perch within the White House, Frum continued to contribute to the paper, focusing on the preservation of conservative values and the proper political response to terrorism.

I had a soft spot for David Frum. There was an elegant symmetry to our paths, our border crossings mirror images of each other. I’d left Brooklyn and decamped to a newsroom in Don Mills, Ontario, so I could find my voice. Meanwhile, a Canadian citizen had found his way into the White House—where he would soon coin “axis of evil,” a term many believe helped the Bush administration rally support for the invasion of Iraq, thus changing the course of history.

Our bond, apparent only to me, was to hold up for some time. At twenty-five, I returned to New York City and secured a job at another Conrad Black project, the New York Sun, and then I moved to the Wall Street Journal. Frum’s byline regularly appeared in both of these publications. I took extra note when my old colleague appeared on cable television, unpacking his views in his fired-up yet unfailingly well-mannered way. His criticisms of Fox News’s sensationalism and the GOP’s health care strategy, and his eventual backtracking of his support of the Iraq invasion, would earn him accusations from the right of being a “fake conservative.” Over time, he found a new occupation as the liberals’ conservative, popping up on podcasts with Slate’s Jacob Weisberg and joining the left-of-centre magazine The Atlantic as a marquee columnist. Last November, when Frum published a column saying that Donald J. Trump was unfit for presidency and encouraging conservatives to hold their noses and vote for Hillary Clinton, I swelled with the pride one typically feels for a high-school chum done good.

Even so, when a member of my progressive Brooklyn food co-op saw that I was passing my sedentary shift by reading Trumpocracy: The Corruption of the American Republic, the latest book from one of the great conservative voices of our time, I braced myself for the opprobrium to be expected from a lentil-carrying liberal. Instead, he pronounced the author’s name as if a child ordering his favorite dessert and gave me an approving nod. Trumpocracy, which borrows freely from past columns of the author’s, is a horrifying and entertaining examination of Trump’s rise to power. Training his focus on the bizarre events of the most recent presidential campaign and its insidious aftermath, Frum guides his reader through the disruptor-in-chief’s lying, rule-bending, press-disregarding, corruption-courting ways. In a masterful feat of dystopian world building, he lays out the rings of power radiating from Trump—the sycophants, spineless strategists, and family members who aid and abet him.

While little of the source material will be unfamiliar to any newshound—the extensive bibliography is a collection of 544 links to the likes of Jeb Bush Youtube videos, Daily Mail stories, and Rupert Murdoch tweets, a couple of which even my mother happens to have shared with me—the effect of ingesting them in sum is uniquely disheartening. Frum is a passionate fellow, and his despair over the imperilled institution of democracy builds to a radiantly persuasive call to action. We have the extremism that is seeping into America to blame for the rise of Trump and his ilk, and we must restore moderation’s place in political discourse if we’re going to save ourselves.

Frum can do mountain-moving rhetoric and literary bitch slap in equal measure. Occasionally these powers come together, as in this cry of disappointment with his party for being so spineless as to allow Trump to happen: “The man inside that oval center did not act alone. He held his power with the connivance of others. They executed his orders and empowered his whims for crass and cowardly reasons of their own: partisanship, ambition, greed for gain, eagerness for attention, ideological zeal, careerist conformity.…They pin the flag to their lapels before commencing the day’s work of lying, obstructing, and corrupting.” Frum’s loyalty to the Republican party is unwavering, if more theoretical than ever before. His recipe for salvation: wake up, see Trump for the cynical bully he is, and stand up for all that is right. “We are living through the most dangerous challenge to the free government of the United States that anyone alive has encountered,” he writes. “What happens next is up to you. Don’t be afraid.”

The desire to get it all down, in real time, comes at a cost. The book comes out on the one-year anniversary of the inauguration, and there is little to suggest that during the feverish writing of Trumpocracy the author took lunch breaks with his insider contacts or even left DC—with the exception of the time he spent writing at his cottage in Wellington, Ontario, as he recounts in the acknowledgements. As can be expected of a project attempting to capture a tornado as it rages, there is outdated information as well as glaring absences—most notably the sexual-harassment inferno that has dominated the conversation since this past October.

We are undergoing the first true reconsideration of gender in my lifetime. The Trump presidency played no small part in igniting this revolution, yet it does not appear to hold Frum’s interest. When I reached out to his publisher with a request to arrange an in-person interview about his recent about-face and how it fits in with his life story as well the scope of his entire career, I was told that he was not in favour, as he did not believe that speaking with me would result in “a substantive piece.” Perhaps Frum was reluctant to enter a dialogue with a novelist for fear that he would be pressed to discuss the personal and how his own experiences have shaped his talking points. Still, his refusal stung. It was hard not to feel that he had written me off as the glorified receptionist that I had worked so hard to un-become.

Frum appears to be fundamentally missing the moment—as does his book. It’s Michael Wolff’s snakishly reported Fire and Fury that has been making headlines and Twitter conversations. Questionable as Wolff’s methods may be, his audaciously colourful account of the inner workings of the White House breathes new life into yesterday’s news. As for me, I’m struggling with the moment in my own way. At home, in my slippers, I’m looking out the window at freezing winds sweeping across Brooklyn and contemplating how a stalwart conservative who doesn’t see my worth has become a shining light of reason. A new year, yes, but more of the same. A maniac remains in office, and neocons are still cons at heart.

Lauren Mechling is a writer and editor in New York. She has written for the New York Times, the Wall Street Journal, the Telegraph, the National Post, New York, and Vogue.