The Original Reality Show | The Walrus
Skip to content 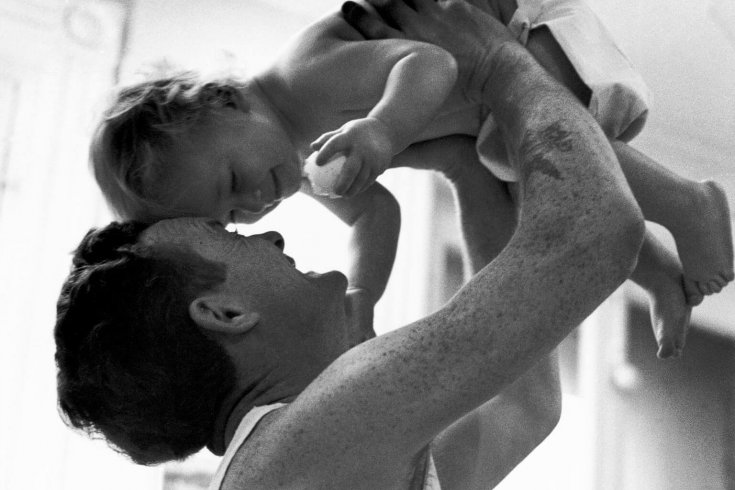 Father and son A scene from the 1967 film The Things I Cannot Change.

When Tanya Tree died in Montreal this past summer, the seventy-one-year-old left behind a handful of films. Colleagues describe someone determined and obsessed but who never warmed to the chore of raising funds for projects—which might explain her limited output. But Tree’s influence remains huge, given that two of her films rank among the most controversial documentaries to emerge from the National Film Board.

In 1966, as a pilot for its Challenge for Change program—the Board’s ambitious effort to illuminate a broad range of social ills—the NFB committed to a film exploring urban poverty. Then twenty-two, Tree (she changed her name from Ballantyne in the mid-’80s) had completed only one film, but she won the assignment when she claimed to have found the perfect family after going door to door in the slums of Little Burgundy. They were Kenneth and Gertrude Bailey, a couple in their thirties juggling erratic contract work and struggling to feed nine children (with another on the way).

The result, The Things I Cannot Change, is a haunting and disturbing depiction of impoverished life—a film whose stark images left an indelible impression upon me when I saw it in 1986 as a film student. Shooting in the emerging observational style of cinéma-vérité, Tree and her crew spent three weeks with the Baileys in their cramped apartment. Kenneth emerges as the documentary’s most charismatic and complicated character, a loudmouth who adores his family. The children are endearing as they brave miserable situations, including their father’s run-ins with police. The parents rush to the hospital at one point, as Gertrude is going into labour (the cameras actually capture the childbirth). In another scene, a child asks for more food, and Kenneth opens the fridge door to demonstrate just how empty it is.

When The Things I Cannot Change was broadcast on the CBC in 1967, the screening met with solid ratings. This was essentially a two-channel universe, and the Baileys were unprepared for what followed. Neighbours mocked them, and the children were taunted at school; eventually, the family was forced to move. Worse, the title of the film was derived from an inscription on a piece of wood that Kenneth reads for the camera. It turns out to be the Alcoholics Anonymous serenity prayer, which led viewers to believe Kenneth was a drinker.

The film became a flashpoint for filmmakers and critics, who debated whether the Baileys—reportedly paid a flat fee of $500 for their participation—had been exploited. The presence of the camera clearly altered the family’s behaviour in ways the filmmaker did nothing to stop. In one standout sequence, Kenneth confronts a man on the street about money he claims he is owed. “Give me my $6!” he yells, before gesturing to the camera crew, as if these witnesses would help force a payout. Kenneth then rips the man’s suit jacket. In response, the victim smacks Kenneth in the face three times, bloodying his nose. It remains a terrifying scene, for which Tree was pilloried.

The film didn’t exist in a vacuum. Forms of storytelling were emerging that broke down traditional firewalls between subject and artist. Two years earlier, Truman Capote published In Cold Blood, a hugely influential “non-fiction novel” about the 1959 murder of a Kansas family, which raised thorny questions about the author’s close relationship with the death-row killers. Along with this new strain of immersion journalism, filmmakers now had access to lighter equipment that allowed for gritty, fly-on-the-wall moments. The hope was that subjects would grow comfortable in the presence of a camera and reveal their true selves. Instead, subjects became voyeuristic fodder. When New York filmmaker Shirley Clarke released Portrait of Jason, a feature-length interview with a queer black hustler, in 1967, she was condemned for her white, middle-class “consumption” of an exotic outsider.

For the NFB, cinéma-vérité represented a kind of grassroots filmmaking that appealed to the institution’s own desire to spur social change. By marrying direct reportage with an earnest effort to illuminate what was wrong, a movie could make things right. But as Tree’s film showed, new styles brought new ethical problems. Critics charged that while The Things I Cannot Change exposed suffering, it failed to offer solutions. In his 1981 book, Movies and Memoranda, D. B. Jones highlighted the irony that Tree’s idealistic efforts at consciousness-raising had instead resulted in Bailey’s being “hurt by the film, not helped.” Bill Nichols, in his 1991 book, Representing Reality, wondered what good could come from “exposing the survival strategies of an impoverished family? ”

Tree continued to field questions about the Baileys. And by the mid-’80s, she felt that the public’s ongoing fascination with the problematic film, as well as her own growing desire to revisit her errors, justified a sequel. By then, the family had settled at eleven children, some of whom had left home and would not appear in the 1986 follow-up, Courage to Change.

Tree conceded there was tension on the set of the second movie. Indeed, despite its optimistic title, the film doubles down on the original premise, presenting an even more brutal depiction of poverty.

While the Baileys’ new flat reflects the trappings of a better life—colour TV, full fridge—the family has not fared well. Several of the Bailey children appear adrift. The only daughter with ambition has left a waitressing job to answer telephones in an office, but she explains that moving up will be tricky as a childhood accident prevents her from typing. (Her hand was chopped off with an axe; it was reattached, she explains matter-of-factly, but not all the fingers work properly.) She also reveals that she has a son whom she has given up because she can’t afford to raise him. Tree questions the daughter repeatedly about the absent child, but the daughter insists the subject is too painful to discuss.

Perhaps most harrowing is the fate of another daughter, who suffered brain damage in a serious car accident. The family visits her in the home where she’s bedridden, carefully placing an ashtray on her stomach as they enjoy a smoke while catching up. (The family is devastated again after the shoot is over: The film ends with an obituary for one of the sons. It’s as bad as bad luck gets.)

Tree’s two documentaries, released almost exactly twenty years apart, are very different. The luminously crisp black and white aesthetic of the original is replaced by the dour colour hues of the 1980s. While the first film focused on the hardship of penury as experienced by the Baileys, Courage to Change directly addresses the fraught relationship between a film director and her less sophisticated subjects. Nearly all the ethical questions that Tree battled in the wake of the first film are laid bare. She actually pops in a videotape and shows the infamous 1966 fight scene to the family, capturing their reactions as Kenneth gets clobbered. It’s the opposite of a happy home movie.

Kenneth, who has had a brain tumour removed, is also in bad shape. He’s intoxicated throughout much of the film, and rails against an economic system that he feels has done him wrong, but that he doesn’t fully understand. His drunken state is also reflected in his parenting. In one scene he hugs a son and tells him he loves him; in another, he admits that if he could do it all again, he wouldn’t have any children. At one point he even confronts Tree, blaming her first film for setting in motion a self-fulfilling prophecy by presenting him as a drunk. “You called me an alcoholic, then. Dammit, I’m an alcoholic! Give me a drink!” Whether or not there’s any truth to the charge, his pain is real and excruciating.

Fixing one of the wrongs of the first film inadvertently led Tree to commit another indignity. While the family got only $500 for the first round of humiliation, for the second they got ten times as much. The large sum helps explain Kenneth’s and Gertrude’s obvious onscreen discomfort: they endured the torture for cash. Family members look miserable in almost every scene. When someone from the crew suggests they might come back to film another sequel, Gertrude shoots back, “Oh, no. Never.”

In 1993, while a graduate student in communication studies at Concordia University, I set out to write about the ethical complications raised by both films. I looked up Tree and spoke to her as part of my research. She was open to a chat, but soon grew defensive, sensing where the interview was headed. Her instincts were right. Zealous in my attitudes, I felt strongly that Tree had wronged the Baileys. We got into a heated exchange. When I asked her about the $5,000 fee, likening it to dangling a carrot in front of a donkey, she responded angrily: “They like money. They buy beer with it!”

My views have since shifted. I still think the first film is hugely flawed, but for all the criticism levelled at The Things I Cannot Change—including my own—Tree was a pioneer, working in good faith to expose the despair associated with an extraordinary social problem. (Recent film critics, including Brenda Longfellow, have even started to defend Tree as misunderstood.) Moreover, I now witness the film’s galvanic effect on my own students who, thanks to Tree, are shown a reality they rarely encounter: abject poverty.

Of course, both films are poignant reminders that being watched comes with a cost. Exposure on such a scale can have a huge impact, and not necessarily for the better. While that lesson is now an inescapable part of documentary filmmaking, it’s often lost on today’s selfie generation, whose sense of fame is shaped by online media and omnipresent cameras.

Tree assumed a new role in her final decade, that of a walking archivist. She’d been close to Oscar-nominated animator Ryan Larkin and Oscar-nominated experimental filmmaker Arthur Lipsett. She appears in movies about each of these troubled figures, providing opinions about the origins of their problems. (Larkin died after decades of addiction; Lipsett committed suicide.)

Tree faced her own demons. One can’t help but wonder if a lifetime of being professionally vilified played a part in her decision to change her name (Tree, she told friends and family, seemed the perfect choice, as it implied a branching out). But it’s clear that her legacy will never escape those films. And neither will we.

An earlier version of this piece appeared online prior to publication in the magazine.