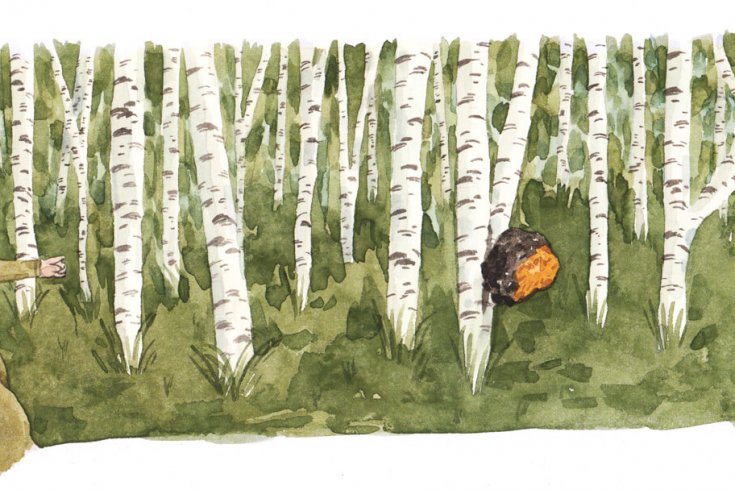 Grant Lauzon hasn’t packed coffee for a camping trip in more than a decade. Instead, when he’s out in the bush, the forty-seven-year-old entrepreneur brews tea from an ugly fungus that’s native to northern Ontario. When he moved to North Bay in 2000, he never thought much about the charcoal-coloured lumps he saw clinging to the sides of birch trees while he was hiking or canoe tripping. Then, while walking in Laurier Woods one day, his fascination with edible mushrooms overcame him, and he broke off a piece of chaga and crushed it into corky grinds to use as a tea. “It was dark and tasty,” says Lauzon, speaking with rapid-fire zeal. “I realized it was a polypore mushroom, which are very medicinal.”

The fungus Lauzon drank is known as Inonotus obliquus, “clinker polypore” to mycologists, but most call it chaga—from the Russian tschaga. While loggers colloquially call it “tree cancer,” the fungus is purported to cure cancer, boost the immune system, combat stomach ailments, and promote clear skin. In short, it’s seen as a panacea. Lauzon claims to have experienced its healing benefits first-hand. “I had suffered from a stomach ulcer for seven or eight years,” he says. Then he started drinking chaga tea. “All of a sudden, it was gone. I thought, whoa, that’s pretty crazy. You know, it tastes good. You could commercialize this.” But chaga is rare—by conservative estimates, it can be found on one out of every 4,000 birch trees—and impossible to cultivate domestically.

The fungus propagates from airborne spores, which harbour in lesions left by broken branches or bark scars in white or yellow birches. There they grow into a mycelium—an expanding mass of fungal cells that eventually herniates from the tree’s bark and hardens. Chaga “conks” develop slowly, but over the course of decades can become basketball-sized.

When a 5,000-year-old human, known as Ötzi the Iceman, was discovered frozen in the European Alps in 1991, his few possessions included polypore fungi similar to chaga. In traditional Russian and Scandinavian medicine, chaga features prominently, and it was likely valued by some of Canada’s Indigenous peoples as a fire starter, as it is one of the finest natural tinders.

The first reference to chaga in literature came in the novel Cancer Ward, written by Nobel Prize–winning Russian author Aleksandr Solzhenitsyn. In the semi-autobiographical work, which was completed in 1966 and banned in Russia a year later, protagonist Oleg Kostoglotov discovers he has cancer after being released from a Soviet prison camp. He is summoned to a clinic, where he receives intense radiation treatment, but he wishes he could have been given a simpler “peasant’s” cure. “He could not imagine any greater joy than to go away into the woods for months on end,” writes Solzhenitsyn, “to break off this chaga, crumble it, boil it up on a campfire, drink it and get well like an animal.”

Lauzon felt a similar draw. During one five-day excursion in September 2012, he scavenged for chaga in the woods outside North Bay, climbing trees armed with a knife and a hatchet—he ended up collecting more than 175 kilograms. He started selling chaga to coffee shops in North Bay just as it started appearing in health-food shops. Lauzon tracked the rise of “chagamania” on alibaba.com, a Chinese e-commerce website. “Some harvesters claimed to be able to provide 40,000 kilograms per month,” he says.

The foraging free-for-all was triggered in part by David Wolfe, a health blogger and the self-proclaimed “rock star and Indiana Jones of the superfoods and longevity universe.” He published a book in 2012 about chaga, calling it “the king of the medicinal mushrooms.” Wolfe also developed recipes, highlighted the science that seemed to substantiate chaga’s health benefits, and mused about “dormant mushroom spores from distant planets . . . carried by cosmic winds or meteors into the Earth’s atmosphere.”

Besides numerous books, Wolfe’s brand includes online retailers of natural foods and “sacred” chocolate, an adventure travel company, nutrition courses, and a paid-access self-help digital magazine called The Best Day Ever. With more than 10 million followers on Facebook, Wolfe is clearly filling a niche. But when he made a stop in Toronto in 2013 to promote his book, Lauzon smelled a rat. “I told him, ‘You’ve got to lay off,’” he recalls. “I realized if I don’t step up and harvest it responsibly, it’s going to be a slaughter.” The craze was making fungus scarce, forcing pickers deeper into the Ontario bush.

Chaga isn’t the only natural health product that’s facing overharvesting. There’s American ginseng, a slow-growing, red-flowered herb also found in the Ontario woods and traditionally used in Canadian Indigenous and Chinese medicine. Ginseng is a key ingredient of Cold-FX, a Canadian product that purports to mitigate symptoms of the common cold—and that was the subject of a 2015 lawsuit alleging false claims of health benefits. In Ontario, wild ginseng has been plundered to the point that it’s listed as “facing immediate extinction or extirpation” under the province’s endangered species legislation. Reishi, another polypore fungus that some believe combats cancer, has also been targeted.

Health-food enthusiasts are drawn to chaga in part for its corky material, which can be also be incorporated into foods and alcohol-based tinctures. In the 1980s, Finnish researchers discovered that the fungus contains inotodiol, an anti-tumour agent. Later, Korean chemists also identified the presence of immune-boosting beta-glucans. Mukund Jha, a chemist who has studied the fungus at Nipissing University in North Bay, estimates that chaga boasts ten times the antioxidants of blueberries, a so-called superfood. Antioxidants are compounds that neutralize “free radicals,” rogue atoms that can accumulate in the human body over time, interfering with cellular function and causing disease. A diet rich in antioxidant foods lowers the body’s workload, says Jha, who drinks chaga tea about once a week. By isolating the fungus’s health-boosting compounds in the lab, he hopes to eventually develop a synthetic version.

But Robert Nuttall, the assistant director of health policy at the Canadian Cancer Society, isn’t convinced. “There is no one miracle food that can prevent or cure cancer,” he says. “Good scientific research has not shown that alternative therapies are effective or safe in treating cancer. Choosing to use an alternative therapy can have serious health effects, such as the cancer spreading or getting worse.”

There’s something alluring about the idea of forest-derived cure-alls. What Agriculture and Agri-Food Canada calls “functional foods and natural health products” were responsible for revenues of $11.3 billion in Canada in 2011.

But many traditional medicines that become health crazes follow a similar pattern: they’re touted as natural remedies, overharvested, and then forgotten when the next fad takes their place. A lowly herb or mushroom, medicinal or not, doesn’t stand a chance against our compulsion to find miracle cures. “Chaga will disappear deeper into the woods where it’s harder to harvest,” Lauzon says. “The conks will keep getting smaller until they’re not worth harvesting at all. It’s our own fault.” Still, he continues to drink chaga tea regularly.

Conor Mihell won a gold National Magazine Award in 2012 for his Explore feature “Into the Light.”
Justine Wong