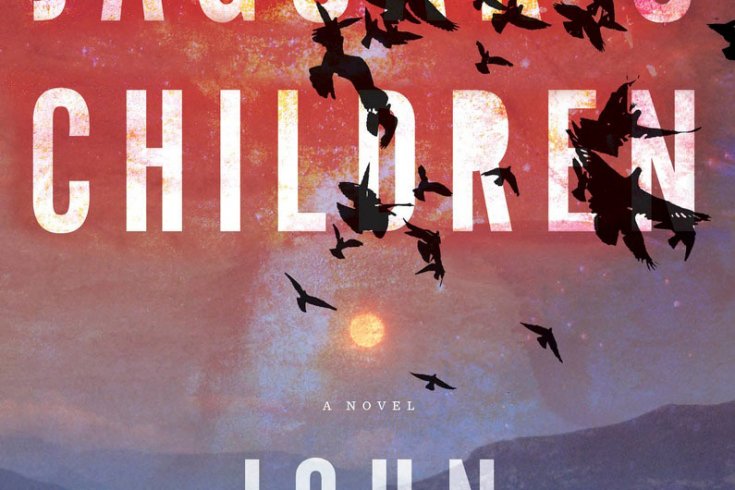 Vámonos was the last human word we heard out there, but even with the shouting I could hear the coyotes’ feet grinding past us over the rocks and sand, heading back from where we came. Some in the tank followed the sound, calling out and chasing after it until they were on top of me and César, pounding on the back wall and screaming. I stayed in my place, my back against the wall and my legs across César with my hands up, trying to keep people from stepping on him. I couldn’t hear the coyotes anymore, only one bird outside warning the others, because the sound in here was terrible, a frenzy. I was trying to get them off, shouting, pushing and kicking them away, but we were like a bucket of crabs with the lid on and no place to go. So many trying to get out in every direction—stepping on anyone in their way, trying to open the money hole, others praying or crying or trying not to be hurt. I heard the baker from Michoacán shouting, “Don’t panic! They’ll come back. They have to come back!” Naldo and the man from Veracruz had their phones on, using them for the light, looking everywhere for some way out. Faces came and went and the walls flickered with blue fire. Never have I seen so much fear in one small place, the eyes so wide and the pupils so big they looked like from another animal. I saw the young woman from Chiapas and she was holding her ears and rocking back and forth, saying something in Maya that sounded like a man was talking. Then, somewhere in the middle of the tank, the boy Naldo was sick. It was a loud and desperate sound, crying and gagging with everything coming out of him at once. This and the high sharp smell of it filled the truck and made everyone stop like they’d been slapped. Somehow I think it helped people to understand the situation—that panic would not save them.

But that was yesterday and it is different now—more quiet—because everyone understands there is no escaping. In an ordinary truck we could maybe find a way, but because this is a water truck there are no cracks or bolts or pieces that can be lifted or broken. It is the perfect prison, smooth inside like an egg. When I looked for the false water box the coyotes told us about, there was nothing up there—only a small round hatch, locked from the outside. The hole where we came in is welded all the way around. The baby-face man and his friend tried jumping on it after the coyotes left—many of us did, but it is too strong. The woman from Chiapas is sitting on it now with the older one who is always praying.

The screen on César’s phone makes everything look cold and blue like we are underwater, or dead already—cruel jokes in here—and to save the battery I turned it down. Nobody has a flashlight or a lighter or even a match because who is planning for this? There is nothing to see now anyway and not a lot to talk about because here we are, you know, and what is there to say? No one has the spirit for Hola, where you from, how is your family?—only for crying and praying and cursing the coyotes. ¡Pinches coyotes! All the questions like Does anybody have a knife or some tool? are finished already. We know what everybody has and it is very little and not helping. The Zapoteco in the front with the older man had a knife, but he broke it trying to get through the money hole, trying to open the little door. He cut himself doing this and he is having problems now. I gave him my phone so he could look at the cut—to clean it and wrap it up. I know from his accent he is from the Sierra Juárez same as me. I’ve heard of his pueblo, but it is far from the highway and hard to get to.

They say coyotes have their own name for a truck full of migrantes—they call it a coffin load. Before now, I thought this might be another story from the government to scare us, but not after seeing those faces all around me. They were the faces of people being buried alive. I tried not to look at them anymore because I knew none of them could help me. This is also when I became confused—between thanking God for pushing me to the back by the pipes and cursing Him for my misfortune. Es una blasfemia, I know, to say this, but you can also say a truck full of people who are tired of working and working, barely making enough to live while a man sits and watches from behind the dark glass of a BMW car es una blasfemia. Yes, and you can say the same of coyotes, no? Is it not a blasfemia to put our faith in these men who are criminals and even killers? And why do we do this? Does the Bible teach us this—to put our money and our lives into the hands of one we cannot see and cannot know? To pray that he will do as we wish or as he promised? The moment you climb into the truck the coyote becomes your god just as he was before the Spanish came. Your fate is in his hands, but Coyote does not know what a promise is. Maybe he speaks your language, but for him the words have no meaning, they are only so much barking—empty as a bowl of smoke. And he does not offer refunds. No, he does what Coyote has done for all time—plays tricks, eats as much pollo as he can and disappears into the hills until he is hungry again. I would prefer to trust a jaguar.