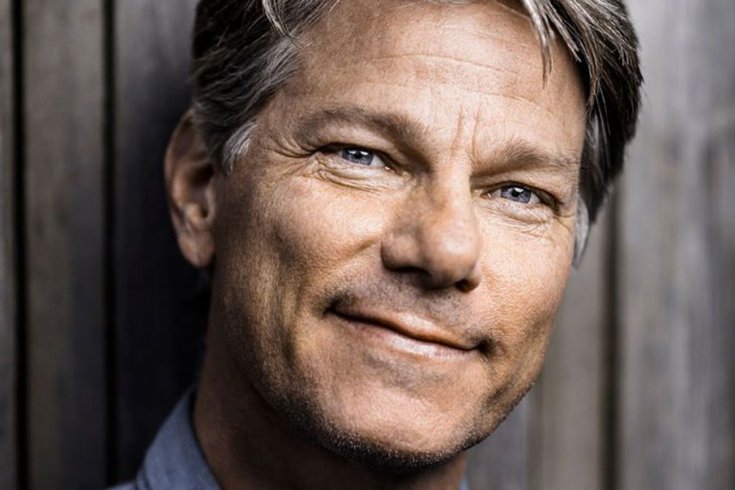 hello i am sorry to bother you but i need your assistance . . .

This is how The Jaguar’s Children begins: with a text, out of the ether. This is also how its author, John Vaillant, became a fiction writer: with a voice, “very courteously” interrupting him while he sat at his computer in the first months of 2010.

Vaillant was already an accomplished non-fiction writer—The Golden Spruce won the 2005 Governor General’s non-fiction prize, and his second book, Tiger, like his first, was a number-one bestseller—but those projects didn’t start like this, with a voice.

He wrote the sentence down. “It was odd enough that I thought I should take note of this and very quickly he [the voice] was inside the tank of a truck and couldn’t get out and he was texting me through the phone and he was in big trouble, on the border,” recalls Vaillant. He pauses. “I don’t get offers from the muse like that. I’m a non-fiction person, looking out there in the real world for inspiration. But it felt urgent and compelling so I followed that.”

The novel is urgent and compelling. Much of it is written in texts from the narrator, Hector, to AnniMac: the only American number he can find in his friend César’s phone. It grapples with many of the big issues a non-fiction writer might like to tackle. Hector and César are Zapotecs from Oaxaca, Mexico’s second-poorest state, trapped inside the tank of a water truck that has smuggled them across the border into the United States. César is a geneticist, on the run from a biotech company that he believes is planting GMO corn in his home state. But before the novel begins, César has hit his head on the wall of the truck and is lying unconscious at Hector’s feet. The truck breaks down and its coyote-smugglers abandon their “coffin load,” promising to return with a mechanic.

Vaillant grew up in New England and lives in Vancouver with his wife, Nora, and their two children. But he has been visiting the Mexican border for most of his adult life (his wife is originally from Arizona), hiking, camping, even swimming across the Rio Grande. “That part of the country is legendary,” says Vaillant. “It’s a mythic place, kind of the way Alaska is mythic. It’s a hairy frontier where all kinds of major continental dramas play out.”

In 2009, Nora, a potter and an anthropologist, packed up the family and moved to Oaxaca City for the year to study with its Indigenous artists. “She’s why I’m in Vancouver also,” he says, half-joking. “I just follow her around and interesting things happen.” I get the sense that interesting things happen to him because he pays attention to what’s interesting. His first book is about a guy who cut down a tree—an unlikely subject for a major bestseller.

But his relationship with Mexico began much earlier, as a child: He grew up in a house filled with Mexican paintings and artifacts collected by his grandfather, George C. Vaillant, a prominent American archaeologist and Aztec authority who lived and worked in Mexico City in the 1930s. Two Diego Rivera paintings, one of a boy and another of a girl, had made an impression on him, growing up. “It turned out one of those Riveras we had was a picture of a Oaxaca girl from 1935,” he says.

So when he arrived in Oaxaca as an adult, “it felt very familiar, very comfortable,” even though his Spanish was terrible and his children wouldn’t eat the food. (“We were always trying to find cream cheese,” he recalls.)

In The Jaguar’s Children, there is an archaeologist, Professor Payne, who, like Vaillant’s grandfather, is friends with Diego Rivera. One of the most fully realized characters in the book is Hector’s abuelo, or grandfather, who works for the archaeologist as a digger and never adopted the Catholic beliefs of the Spanish. His gods live in the mountains, in the Sierra. Like the jaguar.

In a sense, abuelo is the author’s proxy, allowing him to have conversations with the grandfather he never met. Vaillant never wanted to be an archaeologist—“I’d die of boredom,” he says—but as a kid, he did want to be a curator:

There was all this old stuff in the family, so people would give me stuff they didn’t want any more. I collected coins, this very cool old hunting knife, a nineteenth-century game of Parcheesi, and a kind of proto-iPad: strips of ivory, like piano keys, but with a grommet in them so they could fan out and you could write on them and wipe them off—a little portable ivory notepad. Odd objects, ephemera. Weird little bentwood boxes that held lemon salts.

So he created a small museum of his own, everything labeled and sorted. Beaded moccasins from 1870, a thousand-year-old soapstone pipe, and more.

Vaillant’s non-fiction books are, in a sense, curated: collections of disparate facts made sensible by the author-curator’s notes. The Jaguar’s Children, he says, is really a composite of all his experiences of Mexico. But there was no non-fiction container big enough to hold “everything I’m seeing and feeling and learning about this place that is moving me so much.”

The writing experience was different from his non-fiction books—more like a guided hallucination.

“It’s partly you and partly not—where you begin and the character ends. I’m still puzzling that. It’s somehow dovetailing with my own feelings and anguishes and curiosities and joys and sorrows,” he says.

“But at the same time, as a professional listener, observer, perceiver, you’re also trying to take in and channel the moods around you and trying to do that in an authentic way. I think that’s where the best work happens—when there is something about the creator that is simpatico or resonant.”

What I like about Vaillant’s writing—fiction and non—is that he takes the wide angle, the long view: He is looking at the world, and our place in it, in time, as part of a continuum. “That’s the only way I can understand it, in context. Context means looking at biology, mythology and history and psychology and religion. These different contributing forces that make up this whole of our experience,” he tells me.

Soon after we meet Hector in the novel, trapped in the truck, he finds himself listening to his fellow passenger-prisoners, and the “small sounds in the dark then as some people crossed themselves, kissed a crucifix, a medallion, their crossed fingers, counted off their rosaries.” But Hector “had nothing but the little clay head my abuelo gave me and I held this tight in my fist. I will tell you, it is not the head of a saint or a virgin, it is the head of a jaguar made a long time ago when men and jaguars lived much closer together. My grandfather knew this animal well. Never was this an easy thing to do, now it is harder.”

The jaguar is an ancient, totemic figure in Mexico, the way the bear or the orca is in the Pacific Northwest, and the best parts of the novel probe its significance. We get a sense of its importance from the epigraph, penned by Olmec archaeologist Ignacio Bernal, which ends with this sentence: “What is important is the intimate connection between the man and the animal.” The world that the jaguar’s children live in is a lapsed one, where forces beyond their control dictate how they must live. Where a water truck advertising “agua para uso humano”—water for human use—bears a “coffin load,” and has been graffitied with a “j” and “r” to transform the word agua into jaguar.

Vaillant leaves us with the impression that we are forgetting this connection to the world around us, which is not para uso humano alone. That there is an intimate connection between human beings and animals that has been forgotten, and a link to the world we live in and the one that already has passed.

Interestingly, the author considers what we are losing in this forgetting, not only what the animal has lost. But when I ask him who the jaguar’s children are, he tells me they are the people in the truck, the people of Mexico. I’d hoped he would say all of us. His answer, I think, points to one of the novel’s limitations: Vaillant is writing about the plight of Oaxacans, of Mexican migrants. Which is an important subject for non-fiction. It’s an important subject for a novel, too. But to rise up to the level of really great fiction, Hector’s story needs to be our story, a human story, shared by us all. Instead, we are left on the outside, looking in. We are the pale-faced readers. We are AnniMac: silent, as Hector rings and rings and rings, asking for our help.