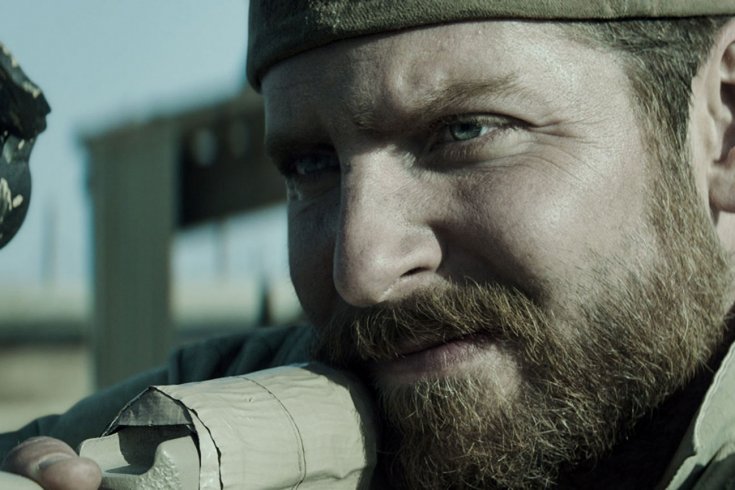 “So,” asks the man in the Armed Forces career centre. “You’re from Texas, you’re a patriot, and you’re pissed off? ” The answer to all three of these questions is “yessir.” And so begins the odyssey of Chris Kyle in American Sniper, an adaptation of a memoir from a late US Marine who logged over 160 confirmed kills during his time in Iraq before being murdered by a disturbed fellow veteran back on home soil.

Clint Eastwood’s film didn’t come with much advance hype. But in the early days of 2015, it has ridden a swell of online and op-ed page controversy—with points of contention ranging from its historical veracity to its celebrity detractors to its odd usage of a rubber baby prop in one scene. The rhetoric has been charged: Seth Rogen tweeted that the movie reminded him of “Nation’s Pride”—the movie-within-a-movie about a heroic Nazi sniper in Quentin Tarantino’s Inglourious Basterds. And in a recent blog post for Rolling Stone, Matt Taibbi wrote that the film is “almost too dumb to criticize” and that it “manages to sink to a new depth or two.” Box-office returns have been surprisingly impressive, however, to the point where the film has become a putative frontrunner for Best Picture.

In his 2003 bestseller War Is a Force That Gives Us Meaning, former war correspondent Chris Hedges wrote that  “the rush of battle is a potent and often lethal addiction . . . peddled by mythmakers—all of whom endow it with qualities it often does possess: excitement, exoticism, power, chances to rise above our small stations in life, and a bizarre and fantastic universe that has a grotesque and dark beauty.” Hedges stated that “war is a drug” five years before Kathryn Bigelow’s exciting, powerful, grotesque, and darkly beautiful thriller The Hurt Locker won the Academy Award for Best Picture, becoming the first movie about the Iraq War to be so honoured.

The theme of Bigelow’s film is the very same lethal addiction described by Hedges. Its protagonist is a bomb-disposal expert who keeps extending his tours of duty because he’s hooked on the life-or-death stakes of the battlefield. A similar scenario plays out in American Sniper. Like The Hurt Locker and a century’s worth of war movies that preceded it—from Sergeant York to Saving Private Ryan—it provides an opportunity to examine the artistic representation of combat.

The French filmmaker François Truffaut once famously said that a true anti-war movie was impossible because the medium couldn’t help but make war seem somehow exciting. That quote was cited by Roger Ebert in his review of Oliver Stone’s 1986 Oscar winner Platoon, which challenged Truffaut’s rule by showing shocking sequences of American soldiers torching a Vietnamese village.

The more recent cycle of Hollywood films abut the Iraq war have taken up the anti-war sentiment of their Vietnam-era predecessors, which is what makes American Sniper an outlier and a flashpoint for debate—especially in film-critical circles, which tend to veer to the left of the political spectrum.

The thing that has driven many writers crazy about Eastwood’s film is that at no point does it explicitly condemn its crack-shot protagonist or the American military establishment that employs him as a blunt instrument in their overseas operations. But this aspect also has helped make the film a popular hit in the United States: The lack of hand-wringing over the justifications for war or the humanity of Kyle’s victims—none of whom register as anything more than targets in his gun-sights—marks its hero as a swaggering cinematic stepchild of John Wayne.

But American Sniper cannot be reduced to simple pro- or anti-war labels. Those viewers who feel emboldened by the vicarious experience of watching an elite soldier mow down enemy combatants might be buying into the glorification of combat described by Hedges. And yet those who insist that the film is (only) selling a pro-military bill of goods are missing the subtlety of Bradley Cooper’s acting in the lead role. Without condescension (to either political extreme), he plays Chris Kyle as a man in thrall to jingoistic fantasies: as the movie goes along, his vision gradually shrinks to the size of a rifle scope. In the film’s most effectively directed moment, Eastwood suggests that this figurative tunnel vision is finally what got Chris Kyle killed—because he couldn’t see what he had become. He didn’t recognize the ex-Marine doppelganger with PTSD who became his assassin.

A good portion of American Sniper is given over to showing the disparity between Kyle’s bulletproof battlefield persona and the full-metal straitjacket that he uses to armour his emotions on the home front. This aspect certainly doesn’t turn it into an anti-war film, or a stealth critique of American foreign policy. But by at least hinting at the gap between the expectations of combat stoked by media representation and the experience of the thing itself, it opens up a space for contemplation about war as a force that gave Chris Kyle meaning—and left him broken in its wake, just like everybody else.