The Climate Change Cabinet | The Walrus
Skip to content 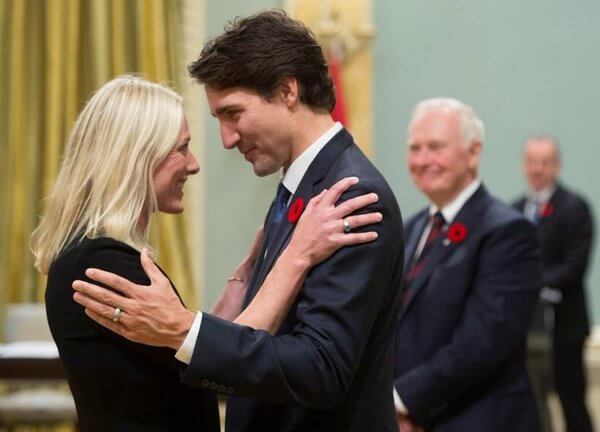 A couple of years ago, I found myself in London with a free day to pass strolling around the city. I was in town for the C40 Cities Awards—a wonky gala celebrating mayors and urban planners and other assorted policymakers whose municipal governments had shown leadership on climate change. After a late breakfast in posh Sloane Square (which is my daughter’s namesake in a roundabout way), I wandered past Buckingham Palace and Nelson’s Column in Trafalgar Square and turned the corner onto Whitehall. A couple of blocks down the boulevard, I finally saw something that stopped me dead in my tracks. It was a small placard, flat gray with an official seal, mounted next to the door of the grand old stone edifice I was walking past. It read “Department of Energy & Climate Change.”

I stopped and I stared. I took a picture. And then because there wasn’t a gift shop or anything, I carried on with my rambling tour. To be honest, I felt like I’d probably tear up if I lingered too long, so instead I got drunk watching a match between two football teams I knew nothing about in a pub near Camden Market.

Maybe it was because I was in the heart of stately old seat-of-empire London but mostly because I was in brief exile from Stephen Harper’s Canada in the grim autumn of 2013 that the simple government sign struck me so hard. The previous summer, Environment Canada staffers had been unable to obtain approval to communicate the most rudimentary facts about climate change—a tweet reading “Canadian Arctic ice reached record low in summer 2012,” for example, was never cleared for posting. And just weeks after I returned from England, environment minister Leona Aglukkaq would appear on national television seeming to doubt the very basics of climate science and acting reluctant even to say the name out loud. “I was in Oslo, just recently at the climate ch—ah climate conference, ah environment ministers conference, sorry”—this was reporter Mike De Souza’s precise transcription of Aglukkaq’s statement.

But here it was, affixed in dry, official placard style to the side of the original Scotland Yard. The name of a cabinet portfolio, no more open to question as a concept than “health” or “education.” Simply a file to be addressed, a challenge to be met—with the full resources of a government department, no less.

So it was no small thing to find, amid the news of Justin Trudeau’s cabinet appointments, that our new prime minister had named Catherine McKenna as his minister of environment and climate change. Here, after ten years of—let’s be frank—sneering contempt and indifference on the issue, was cabinet-level proof that its import and scope are well understood in Trudeau’s government. I was more delighted still to learn there is to be a new “Cabinet cabinet committee on environment, climate change and energy,” and that it will be chaired by the foreign affairs minister, longtime parliamentary climate hawk Stéphane Dion. What’s more, the committee will include Trudeau’s new minister of science, the climate scientist Kirsty Duncan.

Let’s be frank: These are not small changes. This is not window dressing. This is not the way a government signals what one climate activist referred to as an “ambition gap.” Exactly the opposite: This is how a government, new to power and sorting through the cobwebs gathered on a key file neglected for a decade, indicates that the issue will permeate its highest offices, continuously, for as long (let’s hope) as it takes.

Critics on Trudeau’s left flank continue to howl for emissions reduction “targets.” Well, Stephen Harper had targets. His blueprint for achieving them was a contemptuous smirk. A future government, should it decide to resurrect Harper’s legacy on the file, will now have to begin by explaining to Canadians why it is removing a phrase from the name of an entire ministry.

Targets aren’t policy, and they aren’t a plan. And the way you signal your intent to formulate one is to organize a meeting of your fellow heads of government in the provinces, commit to meeting with your fellow heads of state, name a portfolio after the problem, and put the foreign affairs minister in charge of developing policy solutions.

Just two years ago, all I could do is gawk at such resolve on the streets of London in aching envy. Now, after ten years on the climate change beat as a journalist, I can’t remember feeling such a sense of promise for Canada. The signals are not enough, of course, and the proof will be in the plan that emerges from Paris and the promised premiers’ conference shortly afterward, but November 4, 2015, was the best day for climate action in this country perhaps since Jean Chrétien signed the Kyoto Protocol in 1997. Let’s celebrate it. And then, yes—correcting our post-Kyoto failure—let’s make damn sure the government actually translates its gestures into action this time.