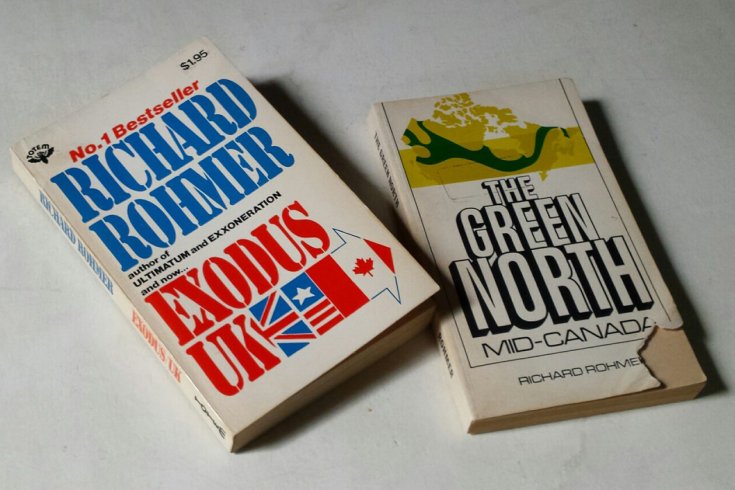 The pound plummets, the markets are in free fall, and the very future of the United Kingdom looks uncertain. Blame falls on the prime minister. He made an ill-advised decision, took an unnecessary risk, and is faced with repercussions beyond his imagination and control. Meanwhile, millions of Britons look to Canada and consider emigration.

This is the crazy scenario laid out in Richard Rohmer’s Exodus/UK, the bestselling Canadian novel of 1975. A thriller without a hero, its main character is bushy-browed British prime minister Jeremy Sands. His mistake, part of the backstory, came in approving the secret sale of Rapier ground-to-air missile systems to Israel. The Saudis find out, are none too pleased, and withdraw all their investments in the United Kingdom. The remaining Arab countries follow their lead.

Is mass emigration the answer? Relocating six million Britons would drain $136 billion from the country’s coffers.

True enough. So, what is to be done?

Richard Rohmer’s novels are born of bold ideas. A Bay Street lawyer, his first and most commercially successful novel, Ultimatum (1973), is a political thriller in which the United States’ thirst for Canadian oil leads to invasion. A great deal of unpleasantness follows. In the sequel, Exxoneration (1974), invading troops are burned alive on the tarmac at Pearson. And yet, all could have been avoided if only author’s plans for a fleet of massive transport planes designed to deliver oil and natural gas from the frozen Arctic to our American cousins in the south had been adopted.

Typically, Rohmer’s bold ideas are solutions in search of problems. In our world, of course, the UK never sold Rapiers to Israel and the Arab countries never withdrew their investments. That said, the bold idea contained within Exodus/UK just might relieve much of the economic pressure wrought by David Cameron’s folly. In the novel’s second chapter, Prime Minister Sands proposes mass emigration as the answer. “How can we get as many people as possible to get off the Islands, to migrate to Canada, the U.S., Australia, New Zealand, or wherever?” he asks his cabinet.

I admit that I don’t quite see it myself. A few years back, writing to fellow Rohmer scholars, I estimated the average cost of relocating a Briton to Canada, the US, Australia, New Zealand, or wherever as $5,000 in 1975 ($22,595 today), meaning that relocating six million British subjects would drain $30 billion ($136 billion today) from the country’s coffers. I wondered about the negative impact two or three million empty dwelling might have on the real estate market, and worried that Oxfam shops would be overwhelmed by abandoned tea sets and copies of Goodbye Yellow Brick Road. In my estimation, it would be cheaper to have everyone just stay put, pour a cuppa, and watch Top of the Pops.

On the other hand, I know next to nothing about money. Hell, before reading Exodus/UK I’d never heard of “rationalizing the population”—specifically, lopping off ten percent—as a method of dealing with economic catastrophe.

Sands institutes an open-door emigration policy and doles out tickets to those prepared to leave. Though he’s loath to tell people where to go—unless they’re on the left, in which case they can go to hell—the prime minister is confident that 2 million Britons will choose Canada as their new home. This provides no end of challenges for Prime Minister Joseph Roussel, Sands’ hard-drinking Canadian counterpart. Seeing its influence diluted by impure dyed-in-the-wool Englishmen, Quebec is adamantly opposed and threatens a referendum on to succession. Meanwhile, Alberta and British Columbia court the UK immigrants in an effort to redress imbalance in the House of Commons. Unless Roussel’s government agrees to the 2 million, our westernmost provinces will hold a referendum of their own.

I spoil things somewhat in revealing that none of this comes to pass. The threats are merely meant to ramp up tension. Neither has a thing to do with Rohmer’s bold idea, which is introduced quite late in the novel in the form of a poorly reproduced map. Canada’s minister of urban affairs reminds the prime minister of Canada of something called the “Mid-Canada Development Corridor,” a scheme for developing the boreal forest, from coast to coast, between Canada’s South and the Arctic area. “If the government decides to take all these people,” argues the minister, “I think we should do a crash-program on the Mid-Canada concept.”

“Excellent idea,” Roussel responds. “That plan was put forward by some lawyer from Toronto wasn’t it? I’ve forgotten his name.”

His name? Why, none other than Richard Rohmer, of course.

The ninety-two-year-old has spent the better part of his life promoting the Mid-Canada Development Corridor. He even once got to present this boldest, most excellent of his bold ideas in a meeting with Pierre Trudeau. Had it been implemented, Chibougamau would be a metropolis today and freeways would link Flin Flon and Fort McMurray.

It’s easy to see why Trudeau didn’t bite. Rohmer never did provide much of a reason for the massive undertaking beyond poor predictions of population growth. In his book The Green North: Mid-Canada (1970), he anticipates a 2016 Canada of 50 million living north of 400 million Americans.

Still, the Mid-Canada Development Corridor does have its supporters. Not two years ago, architect and urban planner John van Nostrand argued for it in the pages of this very magazine. Van Nostrand’s article, “If We Build It, They Will Stay,” is recommended in that it provides reasons for doing it all in the first place.

Whether or not the corridor will be of any use to David Cameron and Justin Trudeau I cannot say, yet I can’t help but think of it as a bold idea whose time has come at last. Forty-six years ago, Rohmer wrote in The Green North: Mid-Canada: “The United States is undergoing tremendous upheavals within its own society and we should be prepared for a sharp increase in the number of moderate Americans who decide to move to Canada.”

If not now, when? November, I’m guessing.