The Alternative Realism of Kent Monkman | The Walrus
Skip to content 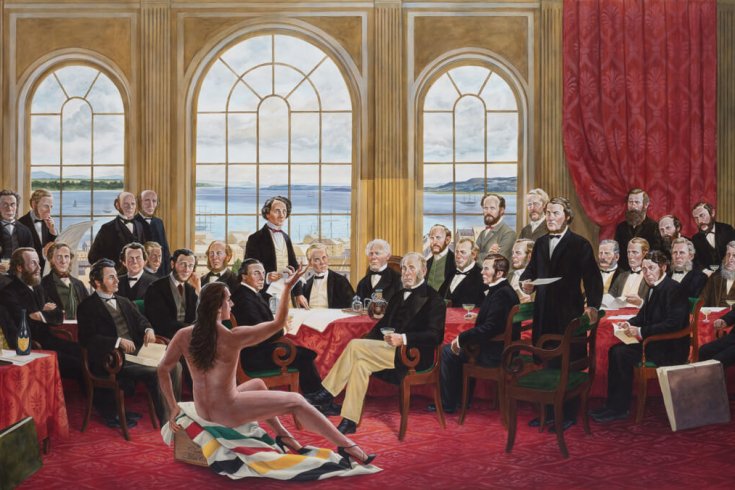 In 1883, the Canadian government commissioned Robert Harris to execute a group portrait of the participants in the 1864 Charlottetown Conference. The painting was exactly what you’d expect: twenty-three men in velveteen nineteenth-century British attire arranged in a semi-circle around a long table, with John A. Macdonald gripping a document, presumably about to launch into oratory. While the original Fathers of Confederation remains an emblematic moment in Canadian history, it was destroyed in the Parliament fire of 1916. Fifty-eight years later, in anticipation of the centennial celebrations of 1967, the insurance company Confederation Life commissioned Rex Woods to recreate Fathers of Confederation. The painting still hangs in Parliament.

Half a century later, on January 26, Cree artist Kent Monkman’s exhibit Shame and Prejudice: A Story of Resilience opened at the Art Museum at the University of Toronto. The centerpiece of the show, which will travel across the country to coincide with Canada’s 150th celebrations, is an immense group portrait titled The Daddies (2016), a mostly accurate reproduction of Woods’ painting, with one difference—a naked Indigenous man in stiletto heels heraldically gesturing from the stool in front of the group. He is Monkman’s drag doppelganger, Miss Chief Eagle Testickle, a flamboyant persona who appears in his paintings, videos and performances. The irony in Miss Eagle Testickle offering a kind of queer welcome to the fathers of Confederation will hardly be lost on anyone familiar with the artist’s work. According to an interview with the Huffington Post in 2014, Monkman’s alter ego was inspired by the nineteenth-century American artist George Catlin, who sometimes painted himself into his portraits of Native Americans. “I wanted to create an artistic persona that could rival that of Catlin,” said Monkman. “So [Miss Chief] was created to reverse the gaze. She looks back at the European settlers.” Miss Chief Eagle Testickle, for Monkman, is a symbol of resilience.

Monkman has always made use of simple, jarring juxtapositions in his art. Daniel Boone leaning back and enjoying a view of a Kentucky valley while being penetrated by a long-haired warrior; a beefcake cowboy with an erection leaning against a tree, his naked body pierced with arrows; or a band of young Indigenous men pushing and pulling a stone Trojan horse down a set of train tracks against the dramatic backdrop of a canyon. Having derived his virtuoso realistic style from the light-filled pastoral landscapes of eighteenth and nineteenth century European and North American Romanticism—a big influence was Canadian painter Paul Kane who, like Catlin, trafficked in stylized images of the “disappearing Indian”—Monkman likes to create familiar historical scenes using elements that run counter to the way such scenes are typically understood. When it comes to Canada’s history with its Indigenous people, and its denial about its colonial past, Monkman seeks to educate through counter-narratives. He supplies an “alternate perspective,” as he recently said, or “alternate facts.” 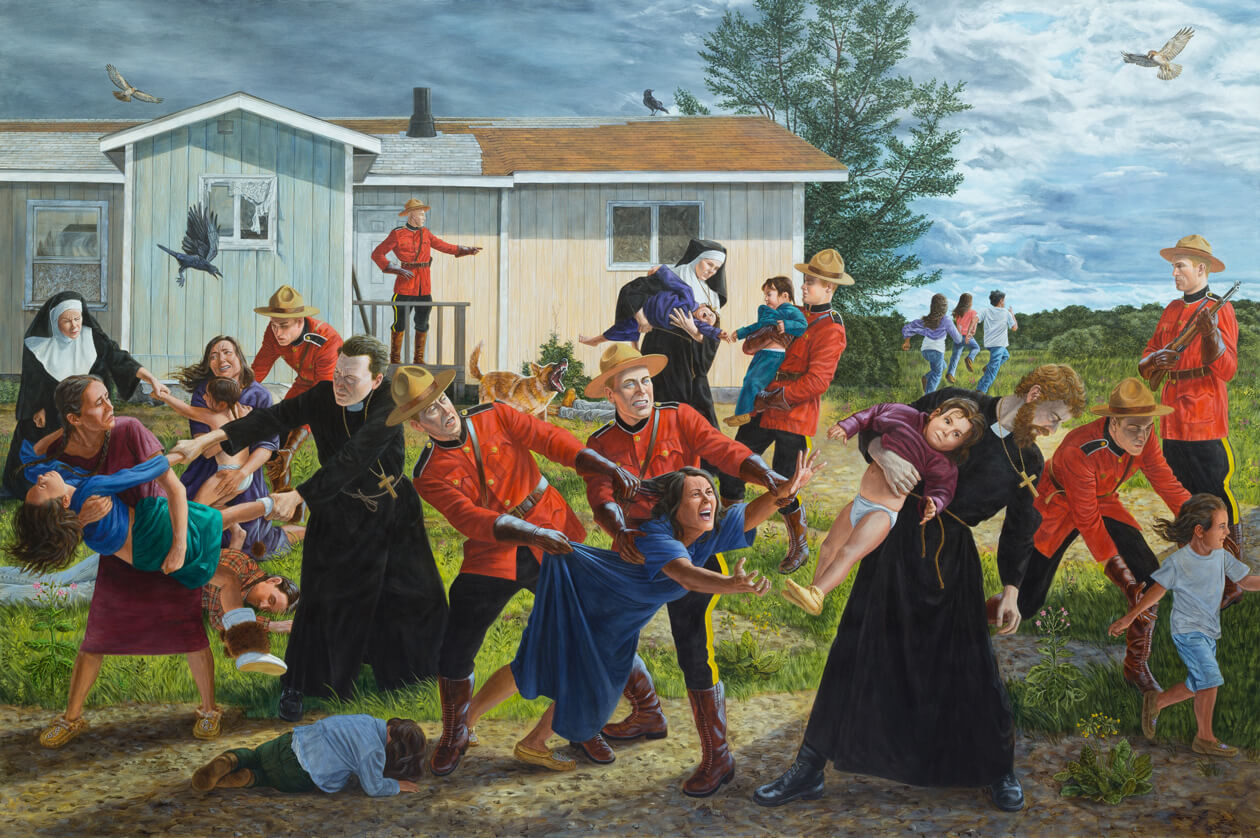 This is especially true of Shame and Prejudice, which depicts the crimes of colonial policy: the dispossession of Indigenous land, the creation of residential schools, and the systematic eradication of tribal languages and rites. The Scream (2016), for instance, whose title echoes the painting by Norwegian artist Edvard Munch—one of the inspirations for the artists who became the Group of Seven—shows Indigenous kids being hauled away to Residential schools by Catholic priests under the supervision of RCMP officers.

But while Monkman’s new paintings demonstrate how European culture and Christianity devastated the Indigenous peoples of North America, they also provide, through their mix of innuendo and allusion, a thoughtful critique of the depredations of colonialism over the past 150 years. In Cash for Souls (2016), we get a realistically rendered street fight between women and Indigenous prisoners in orange prison garb while a helicopter and an angel hover above. The subversive synthesis suggested by yoking such disparate elements together seems to put Monkman on the reconciliation side of the discussion—or the possibility of reconciliation. Shame and Prejudice is predicated on the idea that Indigenous history is by now folded into Canadian history. Any change in that relationship, Monkman has argued, begins with “looking at the original treaties and what they entailed, a sharing of resources. Seeing that Native people were supposed to be partners, not treated like wards of the state.” What does “sharing of resources” mean in this context, and what would it mean to think of Indigenous people as partners? Partners in what? If Shame and Prejudice is any evidence, partners in creating a country different than the one imagined by the gaggle of straight white men at the Charlottetown Conference.

Monkman is one of many Indigenous artists to receive prominent attention over the past few years. Indeed, Indigenous art is practically the theme of the moment, with well-known figures such as Alex Janvier and Rebecca Belmore in the spotlight, and younger artists such as Shuvinai Ashoona, Duane Linklater, and Nadia Myre picking up plaudits in Canada and internationally. Nonetheless, Monkman appears to be one of the few Indigenous artists not to have publicly renounced Canada 150 and the premise it’s based on when it comes to Indigenous people: reconciliation and healing. Monkman is critically fierce about the museum-ready stereotypes of Indigenous life common in the work of nineteenth-century artists like Catlin and Kane, but his approach is to reconfigure how we look at history rather than repudiate that history.

Repudiation is on offer elsewhere, however. When Eric Ritskes, a Canadian activist and the editor of the open-access journal Decolonization: Indigeneity, Education & Society, posted his iconoclastic alternative version of the official Canada 150 logo, “Colonialism 150,” the response was so overwhelmingly positive that he decided to put it on T-shirts as a fundraiser for the Indigenous arts organization the Onaman Collective.

And since the beginning of 2017, the outcry against the celebratory attitude toward Canada 150 has been intense. On January 2, for instance, Métis artist Christi Belcourt—also involved in the Onaman Collective—tweeted alternative versions of the logo under “#Canada 150 years of stolen land.” An hour later, Red Works Photography founder Nadya Kwandibens announced, “Don’t tag my art #Canada 150 and/or #reconciliation. My art does not celebrate colonialism nor does it bow to the industry of reconciliation.” Chippewar, also known as Jay Soule of the Thames First Nation, whose Twitter handle is “Indian Outlaw,” created stickers with lines such as “Canada 150 Years of Genocide” and “Canada 150 Years of Broken Treaties.”

There is a question to consider at this point: Is contemporary Indigenous art and culture an integral part of Canadian history, even though that history has often been contested and catastrophic, or a separate phenomenon on a separate path, one radically incompatible with the values imposed upon them by European settlers? Monkman’s work, with its forms and schemes shaped by the tradition of European painting, can be said to fall in the former category; those who repudiate the idea of “Canada 150” tend to fall in the latter.

What, in the end, does it really mean to reject Canada 150, or to call for something called “decolonization”? According to Toronto-based activist Syed Hussan, decolonization “is a dramatic reimagining of relationships with land, people and the state.” It is, as he puts it, “an unlearning” of existing settler power structures—for both Indigenous and non-Indigenous people. This “unlearning” has taken on a distinctly adversarial edge for younger generation of Indigenous artists, with Chippewar’s transformation of a Windex bottle into a “Decolonize your mind brain cleanser” ad capturing the mood: decolonization as a rejection of practices inherited directly from a colonizing regime, and as a decoupling from Western idioms that have been involuntarily acquired.

Of course, while decolonization is—as one much-discussed essay by Eve Tuck and K. Wayne Yang puts it—“not a metaphor,” it might be better to call the process more of an aspiration rather than something that’s been manifested in individual works (though the long, unsettling scream that Anishinaabe performance artist Rebecca Belmore directed at an audience at the Southern Alberta Art Gallery in 2012 might come close).

Still, the “separate path” notion of decolonization depends on a historical model of colonization that seems too simple to apply to Canada. That model is perhaps closer to the British in India, say, or the French in Algeria, where a European power invaded, administered, exploited, and attempted to transform a country in its own image, and under pressure withdrew, leaving behind both useful infrastructure and destructive tensions. In Canada, Indigenous customs and tradition were so massively damaged by nearly 300 years of colonialism that it forced many First Nations to rebuild their culture. Yet Indigenous artists, writers, and activists, also grew up in Canada; they speak and write in the languages of Canada; they are conversant in Canada’s technologies and popular culture. According to the 2011 National Household Survey, nearly half of Indigenous adults in Canada have a postsecondary qualification, and today practice their vocations as artists, musicians, activists, lawyers, doctors, and professors in ways that are indelibly impacted by the history and culture the settlers brought with them and evolved from there.

We don’t yet know exactly what the partnership Monkman refers to will look like, but Shame and Prejudice appears suggest that, at some point, irrespective of whether any convincing form of reconciliation occurs, Canada’s Indigenous peoples became Canadian. If decolonization is applied literally—in the arts and culture world or in an academy occupied by journals like Decolonization: Indigeneity, Education & Society—it would have to involve erasing, or at least ignoring, much of what younger, educated Indigenous people have become. It would also threaten the Canadian cultural baseline upon which Monkman has built his signature career.