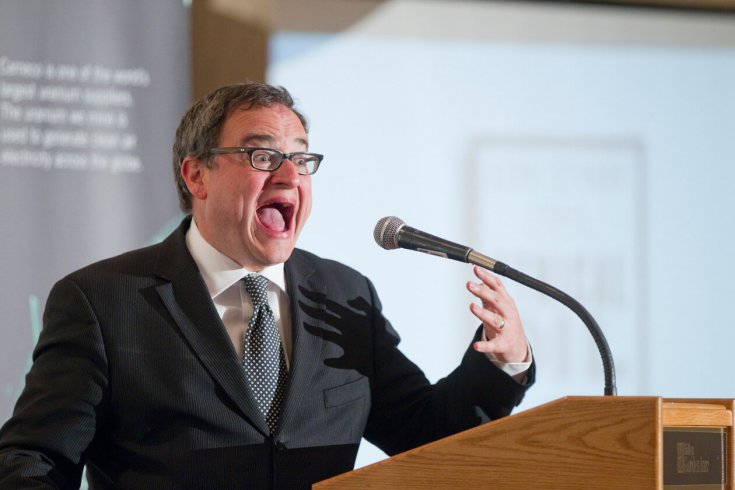 Levant was wrong, of course. At the end of the unpleasantness, the Sun News personality had to step into the ring to interview the victor, as the bested and bloodied Senator from Quebec looked on. Still, Levant tried to make the best of it: “You’re not the Shiny Pony, you’re the Stallion!”

“From you, Ezra, that’s a lot,” Trudeau responded. “This must really eat you up inside.”

It must have. Levant has been swinging wildly against the prime minister for years, but he’s rarely landed a punch. On the odd occasions he has connected, the pain inflicted has been his own, as with the 2014 televised “monologue” in which he dismissed Justin Trudeau’s father as a “slut” who would “bang anything,” and described his mother as a woman who “didn’t like to wear panties.” The Trudeaus, Levant has assured us, were a promiscuous couple that “publicized how many conquests they had had.”

Sun News Network, his employer at the time, issued an apology for Levant’s words. It was not the first time, but it would be the last; months later, the network went off the air.

Today, Levant has his own media site, The Rebel, of which he is the self-ranked “Rebel Commander.” Brian Lilley, the Sun co-host of Trudeau vs. Brazeau, is one of his foot soldiers. Now, Ezra Levant can say whatever the hell he wants. Last week, in the wake of the shooting in Quebec City, he speculated that gunman Alexandre Bissonette just might be a Muslim convert. The week before that, he was getting all giddy speculating whether Margaret Trudeau features in Surviving at the Top, Donald Trump’s fanciful 1990 sequel to The Art of the Deal. Might she be the “Madam X” who shared “an incredibly torrid scene” on a couch with one of Donald Trump’s friends?

Was it her? Did they do it? Did they?

To be fair, Levant’s obsession with the sex lives of the Trudeaus is anything but unique; it’s shared by those who comment regularly on the Facebook pages of Justin Trudeau Not, Canadian Patriots, the Conservative Party of Canada and, as might be expected, The Rebel. This past November, these same souls celebrated Donald Trump’s electoral victory, cheering the president-elect as someone who would put Justin Trudeau in his place. Brazeau may have disappointed, but now they have a man who can really pack a punch. Trump claims as much in The Art of the Deal:

“Even in elementary school, I was a very assertive, aggressive kid. In the second grade I actually gave a teacher a black eye. I punched my music teacher because I didn’t think he knew anything about music and I almost got expelled. I’m not proud of that, but it’s clear evidence that even early on I had a tendency to stand up and make my opinions known in a forceful way.”

With three-time champion Stephen Harper now in retirement, this crowd looks to Trump to give Trudeau a drubbing.

The first Ezra Levant book published by Rebel Media, Trumping Trudeau is barely a book at all. It amounts to no more than 18,000 words, but it is worthy of attention.

This is Levant at his finest, by which I mean his most restrained. Trumping Trudeau is a relatively level-headed approach to the challenges the Trump victory impose upon our prime minister. Levant’s contention is that the “Justin Trudeau Era” lasted barely a year, ending abruptly on the evening of the American election. Since then, our prime minister has been in denial, “chirping snide remarks to the media,” as “Donald Trump has been busy choosing his cabinet and engaging with the countries that have always captured his attention—like China, Mexico and Israel. When he inevitably turns his attention to Canada, our country will get the full Trump treatment.”

Anyone with a subscription to The Rebel—full disclosure: I gave up mine as a New Year’s resolution—will find much of Trumping Trudeau awfully familiar. For the most part, it’s a rehash of Levant’s many criticisms of the man, beginning with his years as a rookie member of parliament. Remember four years ago when Trudeau said, “There’s a level of admiration I actually have for China, because their basic dictatorship is actually allowing them to turn their economy around on a dime and say we need to go greenest fastest, we need to start investing in solar”?

That’s featured here—but not really, because Levant has a habit of getting things wrong. Levant gives it to us this way: “‘You know, there’s a level of admiration I actually have for China because of their basic dictatorship,’ he told a group of Liberal activists at a ‘ladies night’ in 2013.” Trudeau is misquoted often, his words truncated and taken out of context, while Donald Trump appears almost exclusively through his myriad tweets: “The United Nations has such great potential but right now it is just a club for people to get together, talk and have a good time. So sad!”

Yes, sad. Also sad is the way Levant measures Trump’s priorities and positions through his tweets, and measures political capital through re-tweets:

“If the sheer number of Twitter comments are anything to go by, Iran is the country that vexes Donald Trump more than any other, except China.”

“‘Iran’s nuclear program must be stopped – by any and all means necessary,’ he tweeted back in 2011. Not a lot of room for interpretation there.”

This is a book written on the fly by a man who has never been bound by fact. My favourite Levant gaffe came last year when he claimed Winnipeg’s James Armstrong Richardson International Airport had been named after one of Pierre Trudeau’s cabinet ministers. The airport is in fact named after that minister’s father, a Canadian commercial aviation pioneer who died in 1939, when Pierre Trudeau was nineteen years old.

When reading Levant it is always good to keep in mind the words of lawyer Iain MacKinnon who, whilst defending the Rebel Commander in one of his many defamation suits, argued that Levant’s readers know his writing shouldn’t be taken “at face value.” I’m not sure that regular Rebel readers and viewers understand that, however. The most entertaining passages concern “a popular meme circulating the Internet, quoting Trudeau as saying, ‘if you kill your enemies, they win.’” Levant acknowledges that there is no evidence the prime minister said these words, all the while broadcasting a Rebel video that claims it is true. Two pages later, Levant changes his position, stating that while, yes, Trudeau never made the statement, “he’s said as much in other words.”

The errors in Trumping Trudeau run from the trivial (Levant gets the length of our border with the United States wrong) to the disquieting (he shrinks the Jewish population of Canada, while inflating the number of Muslims). Just how the author got these things wrong is a mystery; Trumping Trudeau contains no citations, no footnotes, and there is no bibliography.

It also isn’t true that Trudeau has no “businessman” in his cabinet, though I do understand why he’d like us to think so (a businessman, after all, would understand the importance of the oil sands when it comes time to “pay the bills”). And only someone who hasn’t read Chrystia Freeland’s internationally lauded Plutocrats could write that “it reads like a college student trying to make a thesis out of Robin Leach’s old TV show, Lifestyles of the Rich and Famous.” (Lifestyles of the Rich and Famous being, of course, the program in which a certain orange-faced billionaire speculated about the future size of his infant daughter’s breasts.)

Levant is correct in predicting challenging times ahead for the government, but fails to convince that the situation is as stark as he puts it. “Justin Trudeau and the Liberals have a choice to make,” he declares. “Turn Canada into the leader of the opposition for the whole world, or serve Canada’s interests carefully and constructively, and make the best of the next four years.”

A number of the Rebel Commander’s recommendations, however, look questionable, the foremost being that the PM should appoint former convict Conrad Black as Canadian ambassador to the United States. While it’s a real stretch to say that Baron Black is “plain-spoken” like Trump, it’s true that he lived for thirty-seven months in the United States—even if those thirty-seven months were in shelter provided by the American government. On the other hand, I question the advisability of appointing as ambassador a man who renounced his citizenship in order to sit in the House of Lords (this, after having called our country “an oppressive little world”). That alone seems to contradict Levant’s assertion that “Black won’t forget his first loyalty to Canada.”

Trumping Trudeau was released three days before Trump’s inauguration. It was a heady time in which, according to Levant, British prime minister Theresa May thought it “important to be in line with U.S. policy.” The Rebel Commander could not have predicted the weeks that followed: Trump’s bungled roll-out of the “Muslim ban” executive order, his alienation of key allies such as Australia, his plummeting poll numbers. Nor could he have anticipated criticisms of Trump—far greater and less nuanced than Trudeau’s—coming from his heroes Brad Wall and Jason Kenney (the latter of whom tweeted that Trump’s immigration policy was a “brutal, ham-fisted act of demagogic political theatre.”)

Already, Trumping Trudeau is a book crying out for a revised edition, something easily done with ebooks. I suggest the author begin by rewriting the first sentence: “The Justin Trudeau Era lasted precisely 386 days.” The Shiny Pony might have a few more rounds left.