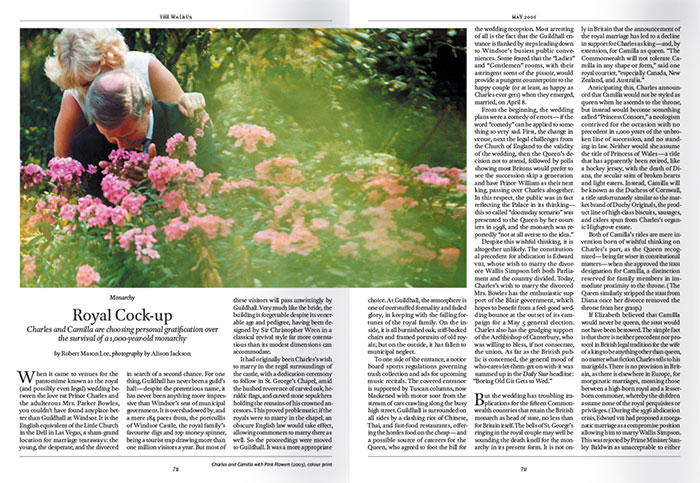 “When it came to venues for the pantomime known as the royal (and possibly even legal) wedding between the love rat Prince Charles and the adulterous Mrs. Parker Bowles…” So began “Royal Cock-up,” a piece by Robert Mason Lee that ran in these pages in the spring of 2005, and from there the tone turned rather negative.

I’m happy to update you on this story. Despite Mason Lee’s prediction that “the bells of St. George’s ringing in the royal couple may well be sounding the death knell for the monarchy in its present form,” with the wedding undertaken in a building that “much like the bride… is forgettable despite its venerable age and pedigree,” the royal family has endured the admittance of an adulteress into its fold.

There has been no rain of frogs, nor hail of locusts, in the ensuing years. King Arthur has not, as legend has it, returned from Avalon to rule Britain in her time of need. This is possibly because the British know their history, and when a member of the royal family marries someone a bit offside and no one gets beheaded, or makes a great deal of trouble with Rome over the union, many will in the end be quietly relieved.

I can report that Camilla did not get any younger, yet she has been accepted by the masses. The couple’s marriage, by all appearances, is a happy one. I imagine they guiltily enjoy the shifting of the public’s curiosity from the “love rat” heir to the throne, Prince Charles, to his sons, Prince William and Prince Harry. One of whom apparently married a woman with breasts. I admit I don’t pay close attention to these things; they bug me.

I’m not a revolutionary, and I like the Queen. She seems just the sort of person one would elect as queen if one were given the chance. Canada is a constitutional monarchy. I accept that. It’s like wallpaper I wouldn’t have chosen in a room with a lot of bookshelves, in a house with a lot of history, and I’ve adjusted my tastes accordingly. After all, the bookshelves block most of it, Lord knows what you’d find behind them, and moving them would be too much work.

Somehow, blessed as we mostly are in Canada, we’ve managed to have our betters without having our worsers, but that’s not the case in Britain, where the class system, of which the Queen is arguably the symbolic head, still throttles the nation’s progress. While it’s all camp fun to us here when royalty drops by, ethically we might as well be buying commemorative mugs celebrating India’s caste system. And yet I gave and give my blessings to Charles and Camilla.

If Prince Charles is to be admired, it is for his attempts to give meaning to his life. He seems not so much a fool as not to have noticed that some version of obsolescence ultimately awaits the monarchy, which it would no matter whom he wed. He’s the human equivalent of a fax machine, but to his credit he has collected causes the way Edward VII collected women. Many of the causes are daffy, but it’s inspiring of him to try, I say.

And with meaning in such a life still more elusive than it is to the rest of us, I imagine his marriage to Camilla has at least given him place. Perhaps, despite Mason Lee’s hand-wringing about the wedding venue and the “clashing riot of Chinese, Thai, and fast-food restaurants, offering the hordes food on the cheap,” a buffet that he hints portends evil, the couple has been accepted because their story has the air of the kitchen sink realism the English do so well.

As opposed to the Disneyesque fairy tale originally scripted for their, and our, next king.

I imagine that Her Majesty’s helicopter-riding cameo beside Daniel Craig at the opening ceremony of the Olympics last summer—charming, dignified, and well received as it was—bought the monarchy another 400 years at least, and the next son can likely marry a divorced French adulteress pygmy hippo, without fallout.

Tabatha Southey writes columns for the Globe and Mail and Elle Canada.