Queue Tips | The Walrus
Skip to content
Courtesy of the Prince Edward Island Public Archives and Records Office Receiving: A New Year’s Day invitation open to all PEI residents, published in the Examiner.

At 10 a.m. on the first day of the new year, the line of smartly clad participants snakes up the brass-banistered staircase of Charlottetown’s city hall, at eye level with the framed photographic replica of Robert Harris’s 1883 painting The Fathers of Confederation. I look up and down, but I can’t begin to speculate on income, upbringing, education, or political views. The business suits, extravagant hats, and fancy dress camouflage one’s background.

This levee tradition is new to me, because I am a CFA, “come from away,” as PEI natives refer to anyone not born here. Although observed in a more rarefied way in other parts of Canada, at military mess halls and government houses, levees are far more commonly, more zealously, and more variously celebrated by PEI’s tight island community. Here, they have morphed into modern, boozy meet-and-greets that any citizen (including children) can attend.

As the line inches toward Mayor Clifford J. Lee—who is currently sandwiched between city councillors in the receiving line—I consider what to say. Ahead, a small group stops to linger and chat; a surname has stirred up memories or relatives in common. A city hall official steps out from the receiving line and asks me to write my name on a white card, which will be passed to the mayor so he can greet me personally. I misspell my first name on purpose, to avoid the inevitable mistake of “Diana” for “Daina.” Perhaps this will make me feel more like I belong. The strategy works. The mayor pronounces my name correctly, and I am received warmly but with dispatch. The line dissolves, and people mingle among the tables of free food as trays of white wine are passed around.

Social mobility in the digital age 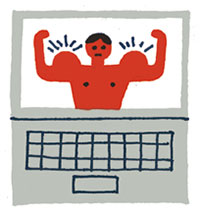 Opportunities for social mobility ought to increase dramatically in the digital age. To that end, Klout, a social media analytics company, promises to break down power structures and democratize social standing: “For centuries, influence had been in the hands of a few,” the website explains. “Klout’s mission is to empower every person by unlocking their influence.” A proprietary algorithm determines a person’s influential “score” by measuring interactions across Facebook, Twitter, and Foursquare. But the scores are rarely static. They rise and fall with great volatility, and do not always reflect the real world. By Klout’s metrics, the influence of a self-made celebrity can be comparable to that of a world leader, at least online. At last check, YouTube video blogger and bestselling author John Green had a score of eighty-three—which put him just four points behind Stephen Harper.

My companions and I aim to visit fourteen of Charlottetown’s twenty-two levees throughout the day. Among the hosts: virtually every level of government, as well as military personnel, service clubs, organizations, churches, and academic bodies. Across the island, Summerside and the surrounding area have advertised eleven levees in the Journal Pioneer, and we have heard about many more by word of mouth. Throughout the crawl, my friends will reminisce about the unregistered festivities of the past, such as the “bootleggers levee” at the Red House, an unlicensed bar on Chestnut Street where the late Gordie Dunn would set out a hip of beef for noshing.

At Government House, even PEI’s lieutenant-governor, Frank Lewis, is surprised by the long lineup waiting to come inside. “I don’t have to tell you, it’s pretty small here,” he says, “and there are so many people who know everybody.” In addition to hosting his first levee (after forty years of attending as a guest), His Honour will visit nine others, including one an hour away in Summerside, because, he says, “I don’t want to be considered a Charlottetown lieutenant-governor.”

Boyde Beck, a curator with the Prince Edward Island Museum and a sessional instructor in the history department at the province’s university, had never heard of a levee before he moved the forty-seven kilometres to Charlottetown from his hometown of Montague. Historical details about the tradition are slight: “Everything we know about levees is what we read on Wikipedia,” he says. A website for the lieutenant-governor of Manitoba traces the custom back to the time of the Sun King, Louis XIV of France, who received his subjects when he arose. In pre-Confederation Canada, the tradition was celebrated on New Year’s Day, when fur traders gathered to pay their respects to the government’s representative and talk about business for the year ahead.

After polling his students about island levee history, Beck conducted a somewhat fruitless search of several Canadian archival databases. The Atlantic Canada Newspaper Survey spit out several nineteenth-century ads for upcoming levees to celebrate the reigning monarch’s birthday. Beck speculates that the current tradition could be a mishmash of long-ago customs, among them the Victorian at-home ritual, an open house hosted by the island’s upper-middle-class women whereby visitors were invited to drop in and present their calling cards. “You knew how well into the social circle you were by how long you had to wait down in the hall,” he says.

Social status no longer enables queue jumping. By afternoon, with many levees now under my belt, I join a line as it chugs over the threshold of the Queen Charlotte Armoury. In the hallway, I can hear the distant sound of a band playing the theme song from Family Guy. An odd smell of seafood chowder wafts toward me. The line bulges as people gather to chat, but everyone waits their turn to be greeted by the members of the armed forces selected to do this year’s glad-handing.

And then, finally, we arrive at the Charlottetown Fire Department, the last stop on our tour. The air here is ripe with beer and sweat. The levees have been carrying on for more than nine hours now, and only the diehards are still standing—some barely. Many have changed into more comfortable clothes as the sense of formality has waned and the attendees in search of hors d’oeuvres and wine in (real) glasses have gone home. There is no receiving line here. It feels like the bar where everybody knows your name—and since it’s Charlottetown, they probably do.