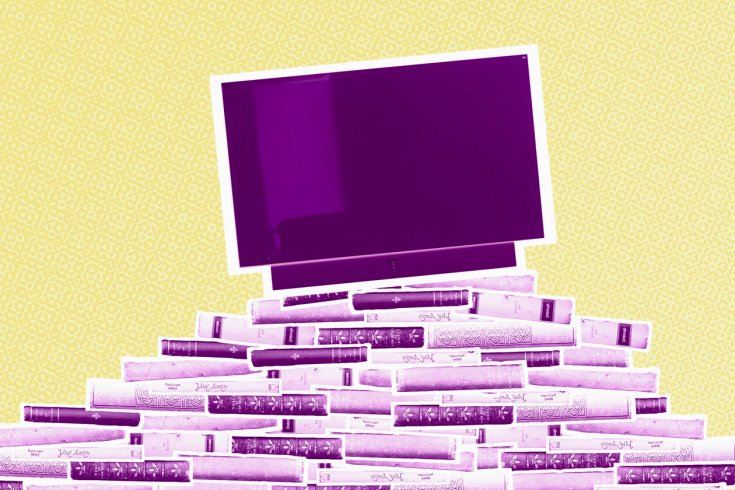 The advent of prestige TV occurred right around the time I became a parent. It was obvious that I would never have the time to watch all the shows proliferating around me. Ordinarily, this wouldn’t be a concern—I’d always been more of an “I don’t watch TV” type—but, at the ad agency where I worked, it seemed that everyone was a fan of Mad Men. Because even the most adamantine principles can bend before social pressure, and feeling the need to at least nod knowingly at Don Draper references, I turned to James Wolcott’s Mad Men recaps on the Vanity Fair website.

From there, I became addicted to recaps in much the same way people became addicted to prestige TV, and I followed the revolution not by watching the shows but by reading about them online. At first, I did this just to understand the basics of the plot and characters, but as time passed, the recaps changed, becoming less about reciting what had happened in an episode and more about analyzing what the events meant in the larger context of the show’s themes and characters. I became familiar with terms of art like show runner and character arc and enjoyed the increasingly exuberant style of writers who were exploring the possibilities of a form of writing that was too new to have any set boundaries or conventions.

At a certain point, it became clear that recaps had grown into something more than a form of CliffsNotes for people without the time to sit through multiple seasons of Breaking Bad or Rectify. The articles started to share a particular, identifiable style: with their hypercaffeinated omniscience about theme and genre and their use of theoretical frameworks to generate close “readings” of the show—a symbolic reading, a historical reading, a feminist reading—they seemed like products of a university humanities department. Just look at the titles. One Black Mirror episode is a “Sly Critique of Empowerment Feminism,” while another “wants to be the series’ thesis statement.” The last episode of Chernobyl “makes a case for the show as science fiction,” Dazed is busy “dissecting the themes of Stranger Things 2,” and Mic is arguing that season seven of American Horror Story is “a critique of white female privilege.”

At their most extreme—“Who Will Win Game of Thrones, Explained by Political Science”—recaps shade into a Potemkin intellectualism, in which a borrowed scholarly authority is brought to bear on a series in order to make it appear more profound than it actually is. The academic style of recaps, in other words, isn’t accidental; it’s precisely why we read them. We don’t want a recapitulation of what we’ve just watched as much as we want a veneer of seriousness. In fact, it’s hard not to see recaps as part of a culture-wide overcompensation by educated urbanites secretly embarrassed by their devotion to television, no matter how many times the adjective prestige is attached to it. Although we are trained to believe in books, we find ourselves watching shows about dragons, criminals, and covens. This leads to cultural status anxiety—a feeling that we aren’t really as sophisticated as we think, because when given the choice, we’d rather flip on HBO than pick up Middlemarch.

There are two ways out of this cognitive dissonance: we can admit our tastes aren’t really as elevated as we like to believe, or we can convince ourselves that television is actually an example of high culture. The recap industry has sprung up to facilitate the second option. Without recaps, it’s hard to see how prestige TV, as a form, can exist.

Emily Nussbaum’s new book, I Like to Watch: Arguing My Way through the TV Revolution collects many her New Yorker pieces written during the time TV became a prestige genre. The opening essay traces her path from doctoral student in literature to professional TV writer in a triumphalist tone; the first sentence runs, “What happens when your side wins the fight, the drunken cultural brawl that you’ve been caught up in for nearly two decades?” and Nussbaum goes on to mock the men she refers to as “the sweater-vests,” who, when she was in grad school, used to pontificate about books and brag that they “didn’t even own a TV.”

I’ve never worn a sweater vest, but I felt the bite of Nussbaum’s caricature. It wasn’t too long ago, after all, that TV was looked down on for pandering to audiences rather than challenging them. Sure, there were outliers like The X-Files and Seinfeld, but the medium was generally too inoffensive, unadventurous, and formulaic to merit close examination. That changed on January 10, 1999, when a New Jersey mobster walked into a psychiatrist’s office. A mafia show by turns brutal and lyrical, The Sopranos was unlike anything that had appeared on the small screen. Viewers obsessed over its nuanced storylines, complex characters, and moral ambiguities, and with that obsession, the show ushered in our era of prestige TV—or TV that seeks to be art.

The Sopranos demonstrated that if a series took itself seriously enough, critics would reply in kind. Reviews, blog posts, and essays picked apart every aesthetic decision made in the high brow shows that followed—The Wire, Mad Men—abounded, both in print and online. By 2014, it seemed normal to come across two writers, in the New York Times, debating whether these “Golden Age” TV shows were doing the cultural work that novels once did. But the question was rhetorical. We were, by then, well past the cultural inflection point: television’s intellectual legitimization was complete, with each new inheritor of the prestige mantle—Breaking Bad, The Leftovers, True Detective—being greeted by increasingly sophisticated pieces that told audiences what occurred in each episode and what to make of it.

Game of Thrones set the high-water mark for recapping intensity with its final season this past spring. Each Sunday night, a new episode would air. By midmorning Monday, impatient office workers could already choose their recap from a range of websites, everything from those of news organizations like CNN or Forbes to entertainment companies like Den of Geek. In the days following the final season’s penultimate episode, Slate offered a “Strategic Case for Burning King’s Landing” and insisted that “Daenerys Doesn’t Need to Be a Feminist Hero”; Vox provided a symbolic analysis of Sansa Stark’s costumes and argued that “Game of Thrones did Daenerys Wrong”; Salon, on the other hand, claimed that Daenerys’s “King’s Landing turn was very much earned.” It seemed that, no matter your opinion on an episode, you could find an article somewhere to support it—and if you couldn’t, wait an hour or two, and one was sure to appear.

The defence given for this type of writing is that TV has earned the right to be regarded as appropriate consumption for those with discerning cultural tastes. Indeed, by treating TV shows as if they were literary works, and by tracing the development of characters, themes, and symbolism across multiple seasons, recaps have played a key role in selling prestige TV as something smart people can unashamedly care about. We haven’t traded in books for shallow entertainment, recaps reassure us, but simply replaced one art form with a new one, no less aesthetically valuable. But some of us aren’t so easily convinced.

If Nussbaum is right, and, in the culture war between TV and the novel, TV has won, then the victory is as much a result of technology as redefined aesthetics. Smartphones have made television portable in a way it never was before—the latest episode of The Handmaid’s Tale is just as convenient an option on your commute to work as the new Sally Rooney novel is. For the next generation, the centrality of television to our culture may seem perfectly natural. For those of us raised on books, however, we can’t help but ask ourselves: Is this a good trade-off? As long as TV’s viewership contains a significant chunk of people who grew up in the age when books were art and TV was trash, we can expect the fervent recapping to continue because we are still struggling with the anxiety created by this inversion of cultural values.

It was the frenzy around the final season of Game of Thrones that finally put me off recaps for good. When Barry Strauss, a historian who specializes in leaders of the ancient world, was asked for his opinion on Dany’s destruction of King’s Landing, I asked myself: Why? What possible expertise was Strauss supposed to offer? Despite its name, there were no dragons at Thermopylae. But I should have known what was coming. When the final season went to air, recaps were already sinking under the weight of their own pomposity, with Vox lamenting that the end of Game of Thrones would mean the end of this “glorious age of the TV recap.” The same article, though, also insisted that another show would come along that would bind viewers together just as powerfully as Game of Thrones had.

Nearly a month before the finale, Vulture, a pop-culture website run by New York magazine, had a video feature on “All the Shows Competing to Be the Next ‘Game of Thrones’.” The week after the show ended, there was Vox again, this time announcing, in “the king is dead, long live the king” fashion, that Succession was the new Game of Thrones. Slate, meanwhile, was arguing for “The Singular Genius of Fleabag” and, in the Cahiers du cinéma–influenced undergrad tradition, proclaiming its creator an “auteur,” while Nerdist was asking (a bit awkwardly) “Which Fantasy Novel Based TV Series Will Replace Game of Thrones?”

With new seasons of Stranger Things, Big Little Lies, and The Handmaid’s Tale streaming, and new seasons of American Horror Story and BH90210 on the horizon, we’re about to be inundated with a fresh spate of analytical articles. The recap industry will always need new grist for the endless content mill. But fans will also always need recaps for fresh assurance that the TV they’re binge watching is as worthy of attention as all those books gathering dust on their shelves. When the last of the ice caps melt and we all drown in front of our laptops, many of us will no doubt be scrolling through one last article on how, say, robotics researcher Hans Moravec’s simulation hypothesis explains all the surreal moments in Atlanta—or whatever.

Brooke Clark edits the epigrams website The Asses of Parnassus. His work has appeared in Literary Imagination, The Rotary Dial, Partisan, the Globe and Mail, and elsewhere.