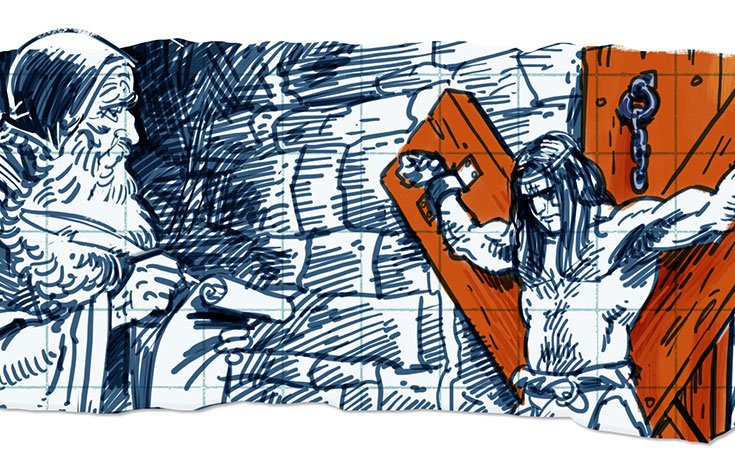 I’m shivering cold and uncertain about my surroundings, but I’ll do anything for science. I’m underground on a hydraulic motion simulator—a six-by-six-metre platform that sits atop a pyramid of stilts—at the Toronto Rehabilitation Institute on University Avenue. The institute is a research hospital focused on the latest technologies and therapies, and the motion platform, complete with interchangeable pods, is part of its Challenging Environment Assessment Labs. Today, I’m inside WinterLab, which features an ice floor and two giant fans that can mimic an Arctic wind, manipulate cold exposure, and facilitate fall-prevention studies. The control room overlooking the movable cube is arrayed with monitors and data-capturing computers—and a conspicuous red telephone. “They had one at Chernobyl,” one of the WinterLab researchers tells me. The lab maintains a land line in case of system failure. I ask him if the participants in this study have anything in common. He raises a brow: “You mean gullibility? ”

And away we go. Strapped into a robotic harness like a flank of beef, I’m testing different kinds of boots on different surfaces. After pouring water onto the ice floor, my WinterLab guide, Yue Li, sits off to one side, buckled in safely as the platform pivots. Some of my footwear fails at a mere two degrees of incline. Sidewalk curb cuts are five degrees; as the institute’s director, Geoff Fernie, says, “They’re designed so that you’ll slide under the wheels of a truck going by.”

“Can we try fifteen degrees? ” Li asks. She’s looking at me, but talking to the control room via intercom. WinterLab tilts soundlessly, and I’m unable to take even a single step before I slam into a mattress strapped to the wall. I notice a small hatch opposite the main entrance to the cube: “What’s that door for? ”

If researchers have something of the sadist in them, volunteers must be masochists. Why else would I return a few weeks later to this claustrophobic virtual environment? This time it’s summer, and I’m in StreetLab. I’m buckled to a chair, with a steering wheel and pedals in front of me. It’s a Sunday drive in the country. Farmhouses dot the horizon under an enormous blue sky. Short grass sweeps away from the two-lane blacktop. Suddenly, I realize that the road is about to dissolve into an open field. I brake and skid to a stop, rocking forward as though I’m in a boat shoved by its own wake. I’m not injured, just unsettled. As I sit listening to the diesel engine drone, a voice from over my shoulder asks, “How are you feeling? ”

The voice belongs to Robert Ramkhalawansingh, the soft-spoken doctoral student assessing my well-being during the test. He asks me to rate my nausea on a scale of zero to twenty. “Two,” I say. He asks me to stay as close as I can to eighty kilometres per hour for the duration of the next seven-minute sequence, and the road reappears on the curved projection screen.

After navigating three courses of virtual countryside, I’m up to six on the nausea scale; the session is stopped if a participant gets to fifteen, and I’m determined to keep going. It’s not self-punishment, it’s altruism! I’m contributing an iota to the sum of knowledge, and iotas add up. Before we began, Ramkhalawansingh had said the performance of older drivers is a hot topic that will propel future research. One purpose of the current study is to improve the realism of the simulation.

It’s plenty realistic to me. Whenever I drift into the middle of the road, the projected white lines flick like moths across the plywood hood. With each sequence, I’m sitting up straighter and gripping the wheel tighter—stressed by the thought of careening into a pixelated guardrail. And the seemingly tranquil pastoral scene has become disconcerting. Was that smokestack there earlier? Or is it a nuclear silo—and if so, should it be smouldering like that?

Sliding to a stop for the fifth time, I stick a hand forward and watch it glow green in the projection of endless grass.

“How are you feeling? ” Ramkhalawansingh asks.

He assures me that the next course will be the last.

In a follow-up email, Ramkhalawansingh will describe my data as “perfectly usable.” I’m pleased to be counted, to be thought of as average. But what I feel upon returning to University Avenue is immense relief. The simple tension of intersections! The sweet waft of a hot dog stand! Amid the wail of sirens, I stride gaily toward Union Station. Compared with StreetLab, the real world doesn’t sicken me at all.