Sisters of the North | The Walrus
Skip to content 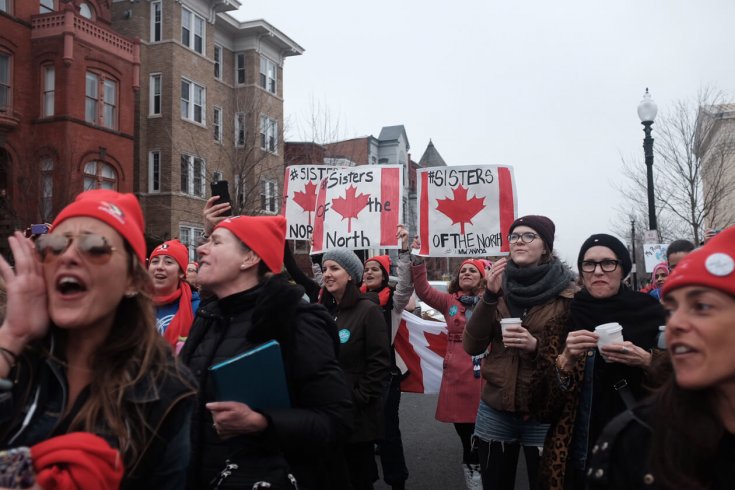 Approximately 600 Canadians travelled to Washington, DC, for the Women’s March on Saturday, January 21. Some Canadians who planned to attend the Saturday march were denied entry at the American border. They were not told why they were turned away.

Hundreds of “sister marches” were held across the world, including marches attended by approximately 60,000 in Toronto, 15,000 in Vancouver, and more than 6,000 in Ottawa. Many signs were a response to Donald Trump’s rhetoric through his campaign, including the now infamous Access Hollywood video where he bragged about sexual assault. Some Canadians who planned to attend the Saturday march were denied entry at the American border. They were not told why they were turned away. Although many signs protested President Trump, others were about supporting feminism or other social justice causes. Some demonstrators were there to support welcoming refugees or to protest the wall Trump has proposed along the US–Mexican border. A marcher holds a sign that reads “If you are brave, stand up for others. If you cannot be brave, and it is often hard to be brave, be kind.” Canadian women arrived by the bus load to take part in the Women’s March on Washington
Sarah Palmer

Sarah Palmer (sarahpalmerphoto.com) has contributed to Toronto Life, Maclean's, and the Globe and Mail.