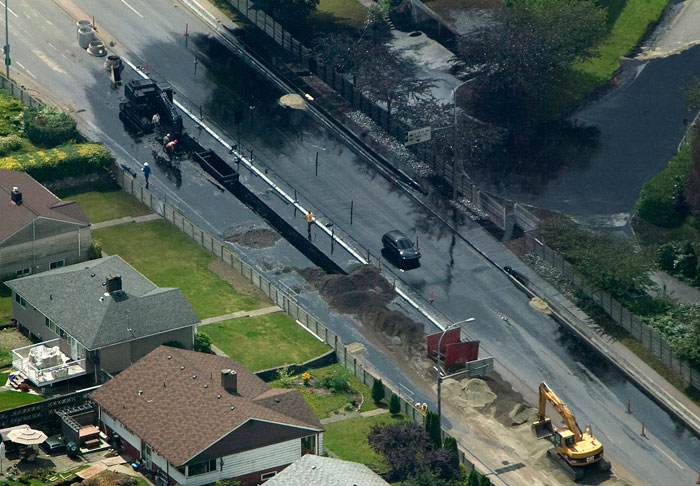 A broken pipeline in Burnaby, BC, sends plumes of oil into the sky in 2007.

For two years, Ben West has watched the comings and goings of Vancouver’s oil tankers from the Wilderness Committee’s offices in Gastown, long enough to know the ships by name. The six-year-old Carmel, registered in Greece, weighs over 100,000 metric tons and can carry more than 700,000 barrels of oil; propped upright, it would reach higher than Vancouver’s tallest skyscraper, the sixty-two-storey Shangri-La. On its way out of the bustling port at high tide, it must manoeuvre through the Second Narrows, a channel that squeezes down to 120 metres wide. This leaves little room for error and no room to turn around as it sails toward the CN bridge, which requires a thirty-minute warning before being raised. Timing is everything.

A surge in oil tanker traffic spurred the thirty-four-year-old West to join veteran Greenpeace activist Rex Weyler in campaigning for restrictions. With no public consultation, annual tanker traffic tripled between 2005 and 2009, from twenty-five to seventy-four ships, thanks to the quiet influence of the largest pipeline company in North America. If Texas-based Kinder Morgan gets its way, as many as 360 tankers could soon be navigating through Vancouver’s waters to pick up oil from the sixty-year-old Trans Mountain, the only pipeline that connects Alberta’s oil sands to the West Coast. West and Weyler fear increased sea traffic will turn the city into a major artery for the Alberta oil sands, and compromise Vancouver’s green reputation as a bastion of environmentalism.

When oil was the first choice for early environmentalists

China’s Sung dynasty (AD 960–1279) oversaw unprecedented economic expansion, but as the population doubled and markets flourished great swaths of forest disappeared. Even ink, then derived from pine soot, drew on the dwindling trees. Politician, essayist, and ­early environmentalist Shen Kua (1031–95) believed he could save the forests by relying on an unlikely ­alternative: oil. By the eleventh century, shiyou, or “stone oil,” had become a familiar substance in China; its extraction dates as far back as AD 347, and its uses were well documented. So Shen ­decided to concoct a new ink from oil soot. One source describes it as “lustrous like lacquer, and superior to that made from pinewood lamp-black.” Nonetheless, it does not appear to have been ­widely adopted. Five years after his death, the forests received a further reprieve when iron forges switched from pine charcoal to bituminous coke.

Kinder Morgan bought the Trans Mountain in 2005. On the day you read this, some 300,000 barrels of oil will flow through the 1,150-kilometre pipeline, crossing prairie farmland and Jasper National Park, running down canyons, and slipping under the Fraser River. New plans to spend $5 billion would nearly triple the pipeline’s capacity, to 850,000 barrels per day. The company also wants to dredge the Second Narrows, to make room for ships large enough to carry a million barrels of oil apiece—four times the amount that leaked from the Exxon Valdez. This would allow for a nearly fourteenfold increase in oil tankers in the company’s first decade of owning the pipeline.

West, a quick-talking Gen-Xer with the disarming, red-stubbled look of a college kid, finds it outrageous that the birthplace of David Suzuki, Adbusters, and Greenpeace could become a gateway for oil sands expansion. He amped up his surveillance of the harbour after an anonymous call from a tugboat captain, who informed him that the federally run Port Metro Vancouver had changed the safety regulations in 2009, allowing tankers to carry more oil. A successful simulation using a ship provided by Kinder Morgan convinced the port authority to reduce the minimum clearance between tankers and the ocean floor from two to 1.35 metres. Industry, provincial, and federal agencies made the decision behind closed doors, with no input from municipal groups, First Nations, Environment Canada, or Fisheries and Oceans Canada. The port authority did not deem them primary stakeholders. Kinder Morgan, however, scored a seat at the table.

These meetings, says West, shaking his head, took place at the same time as the largest oil spill in Vancouver’s history. In 2007, an excavator unleashed a thirty-metre-high black geyser that coated a seaside neighbourhood along Inlet Drive with 224,000 litres of oil, after Kinder Morgan failed to provide an accurate map. (Years earlier, the same mistake led to five deaths in California.) On November 10, 2011, Kinder Morgan pleaded guilty to a regulatory offence under BC’s Environmental Management Act*.

These days, a white transponder sits in the corner of the Wilderness Committee’s high-ceilinged loft, quietly tracking the signals from passing ships. The data gets cross-referenced with information from a website discovered by Weyler, which shows the movements of ships, tugboats, and tankers in ports around the world. West can then alert concerned citizens by text message whenever a tanker enters the harbour. With help from allies along the inlet, he also plans to install video cameras in strategic locations. He doesn’t want anything slipping by unnoticed.

Even as celebrities were being arrested in front of the White House last year, protesting the Keystone XL pipeline expansion’s climate impact, and thousands of British Columbians were voicing their opposition to Enbridge’s proposed Northern Gateway pipelines, Kinder Morgan quietly asked for—and later received—permission from the National Energy Board to secure fifteen- to twenty-year contracts with shippers, making its colossal expansion economically feasible. When local environmental groups asked for hearings on the coast, the NEB refused.

While globalized markets drive the pace and scale of oil sands development, local communities like Vancouver shoulder nearly all of the risks but have very little say. Mayor Gregor Robertson spoke out vehemently against Kinder Morgan’s expansion plans when they were announced in April, and city council circulated a petition to express its opposition and demanded a “robust process of public consultation” in a letter to the company. “It’s discouraging to see projects moving forward without local governments at the table and [without] guarantees that all risks and costs of oil spills will be borne by industry,” the mayor responded in an email.

Before reaching open waters, the Carmel must travel through the Salish Sea, an ecosystem that links the Strait of Georgia and Juan deFuca Strait with Washington’s Puget Sound. Throughout the surrounding archipelago, purple starfish, forests of kelp, and lazy sea lions dot the barnacled shoreline rocks. Last year, a family of endangered orcas greeted an early-morning fishing boat travelling under the Lions Gate Bridge, which connects the city to the North Shore mountains. The year before, a grey whale swam into the heart of the city’s port and hung around for two days. While the harbour may be Canada’s busiest shipping centre, its waters also host a plenitude of other life. If a tanker were grounded in the Second Narrows, strong tides would disperse the oil throughout the region, but the consequences would linger. Twenty-three years after the Exxon Valdez spill, oil is still being ingested by wildlife in Alaska (albeit in small pockets). “This area is not a sacrifice zone,” says West. Even if the ships don’t spill, he adds, Vancouver’s green reputation would bear the shame of an oil-slicked carbon footprint.

His ally Weyler in many ways embodies that reputation. A draft dodger who moved to Vancouver in 1972, he gained international recognition as the photographer of Greenpeace’s first open water confrontation with a whaling boat. After forty years at the forefront of the local environmental movement, he sees himself as an apologist for the city. “We don’t want to be a resource colony for the United States, or PetroChina, or the oil companies,” Weyler says, his iconic moustache, seen in black and white photos of Greenpeace’s early seafaring days, now a solid white. “We want to be Vancouver.”

* An earlier version of this article incorrectly characterized Kinder Morgan’s regulatory offence as a criminal one. The Walrus regrets the error.

Claudia Goodine is a freelance writer in Vancouver.