From the Middle East, but No Longer of It | The Walrus
Skip to content
Journalists Nahlah Ayed and Kamal Al-Solaylee publish culturally informed memoirs criticizing the rise of political Islam in their ancestral homelands 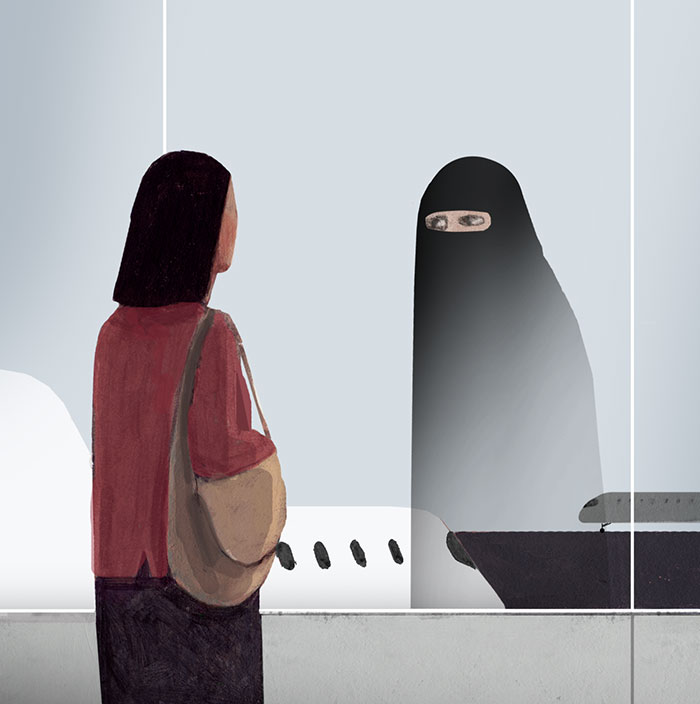 There is no better way to appreciate the special charms of Winnipeg than by spending your formative years in a Palestinian refugee camp. Nahlah Ayed was born in Manitoba’s capital in 1970, and her new memoir, A Thousand Farewells, contains an intensely passionate ode to her native city. In 1976, her parents, Palestinian refugees who immigrated to Canada in the late ’60s, returned to the Middle East to rejoin their extended family, who were then living in squalid UN-run camps in Amman. The elder Ayeds claimed that they made this reverse migration so their four Canadian-born kids could grow up with their ancestral culture, learn Arabic, and get to know their cousins, uncles, and aunts. To this day, Nahlah remains bitter about this baffling decision: “No matter which way I turned it in my head, I could not fathom how bringing us to a rat-infested, cockroach-ridden, and cramped refugee camp was for our own good.”

When her family returned to Winnipeg in 1983, Ayed immediately took note of “the orderliness of the streets, the familiar humid air, and the vast open spaces. I was back where I belonged.” Along with welcome physical comforts, Winnipeg afforded the teenager a safe social space, free from the religion-based sexism and stifling gender segregation she had experienced in Jordan. Yet however much she hated her sojourn there, it has stood her in good stead, giving her the grounding in Arabic culture she has drawn on for nearly a decade as a CBC foreign correspondent, covering everything from the wars in Iraq, Afghanistan, and Lebanon to the ongoing revolutionary turmoil in Egypt.

Her veneration of Winnipeg finds a counterpart in Kamal Al-Solaylee’s passion for Toronto, as displayed in his recent release, Intolerable: A Memoir of Extremes. Books sometimes exhibit family resemblances, and Al-Solaylee’s recollections can be read as a sibling volume to Ayed’s. Both are written by accomplished young Arab Canadian journalists. Both show how the political and the personal have become intertwined in the Middle East, in the tumultuous period from the nationalist uprisings of the ’60s to the democratic revolutions of the recent Arab Spring. Both authors experience uneasy relationships with their ancestral culture, bristling at how the rise of political Islam threatens the freedoms of independent women and out-of-the-closet gays.

Al-Solaylee was born in 1964 in Aden, then a British colonial outpost and now a part of Yemen. He was the youngest of eleven children, a brood ruled over by a wealthy real estate developer. The anti-imperialist uprisings of the late ’60s destroyed the clan’s financial interests, which were unwisely tied to projects founded on continued British control. Dispossessed, and relying on savings squirrelled away in foreign accounts, they found themselves moving from one Middle Eastern hot spot to the next. They spent the early ’70s in Beirut but fled the city as it stood on the cusp of civil war, then moved to Cairo for the remainder of the decade and into the ’80s, and again became hemmed in by social strife before they finally settled in the mid-’80s in San’a, Yemen’s troubled capital.

During their migrations, the family, like many other Arabs frustrated by the failure of the nationalist liberation movements of the ’60s, became increasingly religious, much to the discomfort of youngest son Kamal, who was being pushed in another direction by his sexuality. From an early age, Kamal Al-Solaylee knew he was attracted to men. Even before he met other homosexuals or fully understood the nature of sexuality, he had crafted a rudimentary gay identity for himself, complete with a cultic devotion to Barbra Streisand. As a young man, he became a habitué of Cairo’s gay underworld, but he knew there was no future for him in the increasingly pious Middle East. His own family provided an object lesson in the dangers of resurgent fundamentalism. His sisters had once been independent and fashionable, even wearing bikinis to the beach. But to please their ever more rigid older brother Helmi, and later their husbands, they acted increasingly subservient; one of them started wearing a niqab. To go from “bikinis to burkas,” as Al-Solaylee puts it, was a disheartening regression.

Literature and education offered him a ticket out of the religious suffocation his sisters had experienced. He earned his doctorate in English at the University of Nottingham, which helped him immigrate to Canada in 1995. “I fell in love with Toronto instantly,” he recalls. After the “furtive and then closeted life” he had suffered in Cairo and San’a, he was amazed to end up in a city where a simple bus ride took him from his apartment to the gay village at Wellesley and Church Streets. He would make a name for himself as a writer for the Globe and Mail and other publications, so it is fitting that his book is dedicated to “Toronto, for giving me what I’ve been looking for: a home.”

Despite their love for Winnipeg and Toronto as havens of liberal modernity, neither Ayed nor Al-Solaylee can escape the biological and cultural cords that keep tugging them back to the Middle East. Thomas Wolfe famously advised that you can’t go home again, but implicit in this adage is the proviso that you can never fully escape from home either. Wolfe was himself a memory-obsessed writer flytrapped by his powers of recollection, just as both Ayed and Al-Solaylee keep returning, physically and emotionally, to the culture that shaped them.

Many intelligent immigrants possess a double consciousness, a sort of cultural bilingualism that keeps them constantly juggling the distinct dialects of their two homelands. Despite her Winnipeg birth certificate, Ayed has shared in this immigrant consciousness since she has spent her life shuttling between Canada and the Middle East. Like Al-Solaylee, she sees Canada with Middle Eastern eyes and the Middle East with Canadian eyes. In thinking about the Middle East, both struggle to reconcile empathy with exasperation. They feel rightly horrified by the many problems that bedevil the region: the constant wars, the political tyrannies, the economic stagnation, and the religious extremism. But despite this dispiritingly long list of serious ailments, they still can’t write off the Arab world, which remains home to their flesh and blood.

Ayed is the more empathetic of the two writers, Al-Solaylee stronger in expressing his exasperation. The craft of journalism begins with one simple skill: the ability to listen to others. Ayed is a superb reporter, because she pays attention to the people she meets and elicits from them the core stories of their lives. The major problem with A Thousand Farewells is structural: she has imperfectly integrated the compelling memoir of her first few chapters with the more objective reporting that makes up the bulk of the book. Both sections are excellent, but the shift from soul baring to political reportage makes for abrupt reading.

Unlike Ayed, Al-Solaylee is a pundit rather than a reporter. He has made his name as a drama critic, contributing his acerbic commitment to stringent values to the overly polite world of Canadian theatre reviewing. Although wryly written, Intolerable brings his skill as a cultural analyst to the spiritual ailments of the Arab world. He’s justifiably angry at the thwarted and damaged lives of his siblings, writing that he never felt homesick after moving to Canada but rather “sick from home.” He remains torn between his alienation from his native culture and his affection for his family; and he unfairly upbraids himself for leaving his siblings behind, even though he realizes that the only way he could have created a tolerable life was by moving to the West.

These are powerful, heartfelt memoirs, necessary reading for anyone who cares about Canada’s place in the world. But I wonder whether the authors overstate the divide between Canada and the Middle East. Obviously, enormous differences exist between the West Bank and Winnipeg, and between Tehran and Toronto. Yet, in a globalized world, Canada is tied to the Middle East in countless ways. The niqab can be seen in Vancouver and Calgary as well as in Kabul and Riyadh. Over the past decade, our soldiers have served on the ground in Afghanistan and Libya. High on the list of domestic terrorist threats is the danger of Canadian-born kids radicalized by political Islam. Syrian president Bashar al-Assad is a tyrant, but one of his crimes, the torture of Maher Arar, took place with the assistance of Canadian intelligence. The marketing campaign for “ethical oil” flounders on the simple fact that the same oil companies that are extracting bitumen from the oil sands of Alberta are also making deals with the dictators of the Gulf States. The government of Benjamin Netanyahu, which is undermining efforts to negotiate a two-state solution to the Palestinian problem by continuing to build settlements in the West Bank, is closely allied to Stephen Harper’s Tories.

It’s nice to imagine Winnipeg and Toronto as havens of liberalism and tolerance, but our fate is inextricably tied to the ongoing struggles in these seemingly distant lands. Even those of us who are not Arab have a huge stake in the Middle East, which makes the witness of Ayed and Al-Solaylee all the more urgent.

Jeet Heer is the national affairs correspondent for The Nation magazine. His most recent book is Sweet Lechery: Reviews, Essays & Profiles.
Mathieu Lavoie