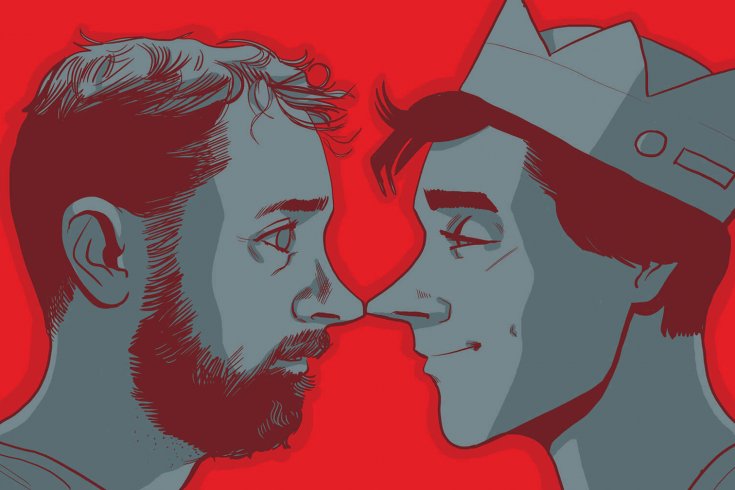 When I walk into Steve Murray’s office, in Toronto’s Junction neighbourhood, the first thing I see is a dick. Well, a drawing of a dick, crudely sketched on one of those slanted drafting tables used by artists and architects and other people who need to draw things on a slight incline. “There was a photographer that wanted to take some shots of me,” Murray explains. “But I work digitally, and he wanted some shots at the table, so I just started drawing a cock.” Sitting in his chair, he swivels restlessly, his soft green eyes lit up like a kid remembering a dirty joke.

This sort of cartoony pseudo-smut has long been Murray’s métier. Or, more accurately, the métier of Chip Zdarsky, his alter ego. Around 2000, like a superhero operating under a secret identity, Murray minted Zdarsky as a way to indulge his cruder side, while still pursuing more legitimate avenues as a writer and illustrator. As Zdarsky worked on obscene web comics—such as Prison Funnies, a series chock full of jokes about inmates training their penises to smoke cigarettes—Murray turned out graphics and columns for the National Post. Then in 2012, on a train ride to Montreal, he received an email from long-time writer Matt Fraction that simply read, “What if we do a sex comedy about a guy who, every time he ejaculates, stops time? ”

The result, Sex Criminals, has changed Murray’s life. He’s become a brand-name mainstream comics artist, a top draw at fan conventions, and, under the Zdarsky moniker, a half-fictionalized online sensation. Last year, he gained international attention when BuzzFeed reported on the friendly Facebook rapport Zdarsky had developed with an Applebee’s franchise in Barrie, Ontario. Casting himself as a bored suburban husband, he interacted with the restaurant’s account as if it were his last lifeline to the real world. In reality, Murray was sending up the idea that anyone might bother to interact with a corporate casual-dining franchise. Applebee’s would post a photo advertising the new whisky chipotle steak and shrimp supper special; Zdarsky would ask if such a meal was fit for a recovering alcoholic. Explaining the elaborate prank to The Atlantic, Murray confessed, “Now that I’ve written it all out I seem quite insane.”

The bombshell success of Sex Criminals, as well as Murray’s rising profile, has put him in an enviable position. Stretched thin by his double life, he resigned from the Post to work on comics full-time. Sex Criminals led to a gig creating a new take on the much-maligned Z-lister Howard the Duck for Marvel Comics, as well as writing Kaptara, a psychedelic sci-fi adventure. Now, in his most surprising turn yet, Zdarsky—the identity Murray created to hide his filthier self—is rebooting an iconic, squeaky-clean character: Jughead.

Sex Criminals is an unlikely superhero story, featuring two unlikely superheroes. It was originally pitched to retailers as a raunchy sex comedy but quickly mutated into much more. The first issue introduces Suzie, a twentysomething librarian with the ability to stop time when she reaches climax. At a party, she meets Jon, who’s drunkenly quoting the opening monologue from Lolita—a book that turned forbidden sex into high art. As it happens, he’s similarly afflicted, sex-wise. “I wanted to do something with Chip that took advantage of his gifts,” Fraction says. “I wanted to do something funny with my friend, something that took advantage of our relationship and how much we could make each other laugh.”

The Apple fracas further increased the book’s notoriety. “Being banned by Apple was awesome,” Murray says. “We got a lot of press out of it, and it became a thing.” From there, Sex Criminals’ thingness swelled. It topped Time’s list of the best comics and graphic novels of 2013. It netted a Hugo Award nomination (the Oscars of sci-fi literature) for best graphic story and won a prestigious Eisner Award (the Oscars of comic books) for best new series. Last year, Fraction optioned the TV rights. “So many readers say it’s their first comic,” Murray says. “And 75 percent of them are women, which is also a slight aberration.”

Early this year, Murray sent a pitch for his spin on Jughead Jones, the burger-munching best friend of America’s favourite teenager, Archie Andrews. His work on Sex Criminals only endeared him further to the brass at Archie Comic Publications. “I love Sex Criminals,” CEO and publisher Jon Goldwater tells me in an email. “It’d be silly of me to not consider a creator because they do work in other genres.”

Murray’s take on Jughead, set to launch in October, shares structural DNA with Sex Criminals. That book dovetailed tender explorations of sexuality with more conventional comic-book fare; the Zdarsky-penned Jughead will similarly bridge opposing worlds. Like many comics, Archie boasts a broad array of alternate universes. There’s Archie’s Super Teens, in which Archie and the gang are transformed into superheroes. Or the Jughead’s Diner story, where a magical stool transports Jughead to a surreal dimension called Dinerville. Most recently, the cast of Archie was killed off and voguishly revived as zombies.

“Jughead’s kind of a daydreamer,” Murray says. “I’m making those weird, classic alternate tales part of his fantasies. The solutions he comes to in his fantasies, he can realize in real life.” In issue one, Jughead dreams up a Game of Thrones–style scenario for himself and the Riverdale crew. The takeaway from his idle reverie—which Murray, careful not to spoil it, calls “kind of a ‘teach a man to fish’ lesson”—is then applied to a scenario at Riverdale High. Problems faced in reality are reconciled through fantasy and escapism. It’s like a G-rated version of Sex Criminals, in which Jon and Suzie’s time-stopping sexploits are a way of working through their relationship issues and testing devotion—especially when their initial sense of being messed-up kindred spirits is dented by the realization that plenty of people share their particular orgasmic superpower.

Today these kindred spirits form Sex Criminals fan groups (enthusiasts are known as Brimpers, after the abovementioned sex act). “It’s become this ridiculous community,” says Raimondo, “where people feel comfortable enough to share what they’re going through.” Fans line up outside comic shops and Middle America convention centres just to meet Murray. “I should not be someone that people want to meet,” he says. “I’m so used to being the weird, outside joker in comics or newspapers or whatever.” He signs his name “Chip!” The gratuitous exclamation mark sums him up—his outsize personality, the manic glint in his eyes, the way he not only autographs books but also eagerly bear hugs fans to the ground.

Last year, at HeroesCon, in Charlotte, North Carolina, Sex Criminals’ ability to bring together weird outsiders was put to the test. During a panel discussion, Murray and Fraction asked the room of 500 attendees to stand frozen, suspended in time, as if the title characters had orgasmed. Then two fans dressed as Suzie and Jon ran around the room knocking peoples’ hats off. At one point, Jon (really a guy named Kirk) hopped onstage, got down on one knee and—as Murray goadingly whispered, “Do it! Do it!”—proposed to Suzie (actually his longtime girlfriend, Amelia). As a memento, the moderator gave Kirk and Amelia a sign from the event. There, at the bottom, scrawled in messy black marker, was a dedication: “Wow! Like . . . Wow.” And then, “Love, Chip!”

John Semley's latest book is Hater: On the Virtues of Utter Disagreeability. He grew up in the Niagara Region.
Chip Zdarsky

Why Do Canadians Throw Away 6 Million Tonnes of Groceries Every Year?