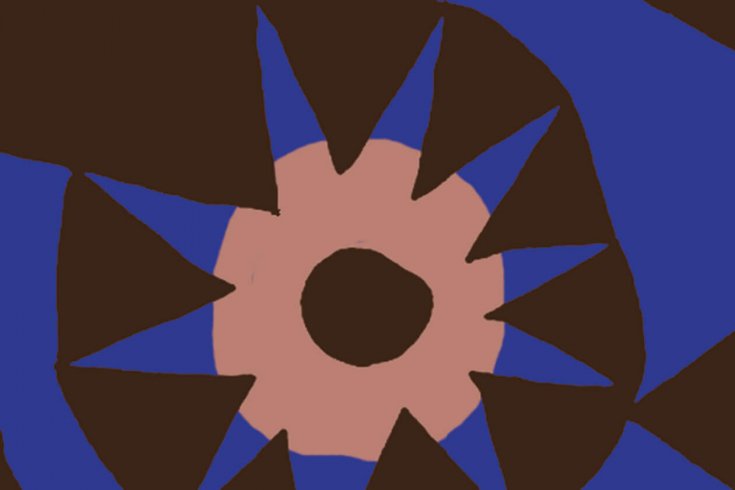 I sit here facing a glass of water. I have a family: a son, baby daughter.
Life’s harder. Harder, and sadder. My father
has Stage IV lung cancer. He’s dying, only faster. Fall, and he might
meet his maker by winter. O let this cup pass, my Father.

I sit here facing a glass of water doing its level best to conjure
his low, unhappy laughter.
A fashion sense that hated anything “fancy schmancy”—anti-dapper.
And such theatre! Talk back, and he’d hike his eyebrows in anger.
Three-pack-a-day-smoker with a bad ticker. Loved trippa, tongue, and trotter.
Epic snorer, inveterate jaywalker, and, when he lost his temper,
a spanker. Rarely spoke about the weather, shaved with a disposable razor,
using a badger brush and bowl to work up a lather.
Preferred his espresso with a cucchiaino of sugar, grilled his steaks

to the finest shoe leather. Let his pen hover above a cheque, a seconds-long
gesture, before touching down and setting free the dramatic
garlands of his signature. At the beach each summer, I’d stop at the edge
of the bone-cold water. He’d stride past, bisected by blue, growing smaller,
and smaller, then dive under,
and disappear. I sit here facing a glass of water and imagine my father
beneath the dome light of his blue Chrysler: whistler, one-handed steerer, moon-gazer.
After an all-nighter, he’d stagger out to the kitchen counter,
full of odour, having slept in his clothes for good measure.
Younger, he was on fire: high-flyer, lady-killer, fast-talker
in black leather. He once ran a red
and tried to bribe the officer. “Idiot licked his thumb and peeled off a tenner,”
said his older brother, Dante, who posted his bail. Only a matter

of time before he fell for his own bullshit
hook, line, and sinker. Turned to poker: small-timer, uncontender,
hopeless hustler. So deep in hock, twice nicked my paper-route money
to pay back a wager. The guy could be a nightmare.
But he never lost his posture, salvaged a certain swagger
from every blunder. Failure, for my father, was a triumph of style. He was

a beautiful loser. Didn’t own a single tool: screwdriver, pliers, hammer, whatever.
When it came to the odd chore, he was a ditherer, a born quitter.
It raised my mother’s ire.
Once, on the receiving end of a blistering lecture,
he handed her the shit-smirched plunger, said: Fine, call the fucking plumber.
Rent past due, he’d send her to dicker with the landlord.
He put her through the wringer; she always threatened to leave him for another.

I was the artsy brooder who thought him too dumb for culture.
I always corrected his grammar.
But Saturday nights, if my plans came a cropper,
I’d rent a thriller—some kung-fu-master-with-a-missile-launcher blockbuster—
and we’d watch it together, faces blued by the screen’s flicker.
He lived for the plot twist, the surprise capper. His favourite movie? Goldfinger.
The showstopper? Bond strapped to a table,
about to be scissored by a laser.
(“Do you expect me to talk?” “No, Mr. Bond,”—sez Goldfinger—
“I expect you to die!”) He laughed and laughed on his lounge-recliner.

This glass of water is holding out for me as I stare into it and remember
how, Sundays, he’d run a comb under the tap,
part my hair, hoist me to the mirror.
He’d read by gliding his finger across text, stop on a word, linger.
Made it seem like all I did was pester. “Not now,” he’d say, “later.”
Once he exploded at my mother, and I stopped him before he could hit her.
And how, holding up our newborn brother, his voice had a quaver.

Not that affection was out of character. He was just hard to decipher.
We hugged once and, for a tender second, I thought he’d say something further.
He didn’t, afraid perhaps it would seal the matter.
Beautiful, how water
glows in glass as dark draws closer. One way or another, we all fail each other.
But I let that almost-moment be a marker that there was a there, there.

Tonight it’s just me and this water.
I know the picture. I learned it from my father.
A glass, half full, and a man looking in, hoping everything blows over.
Cab driver and gambler on a gurney, who thinks himself a failure.
Who doesn’t dream of a do-over, life rebooted and in working order?
Who doesn’t want the power to see exactly
where one should have turned the corner?
Soon I’ll put a straw in water to slake his morphine thirst—a last pleasure.
Soon nights will turn bleaker, his wife and kids crying never ever after
in the small hours. But to say nothing lasts forever is not an answer.
I need something better,
and will sit here, staring deeper and farther
into this glass of water until that point everything becomes clearer.

Carmine Starnino (@cstarnino) is the editor-at-large at The Walrus. His most recent book of poetry is Dirty Words: Selected Poems 1997–2016.