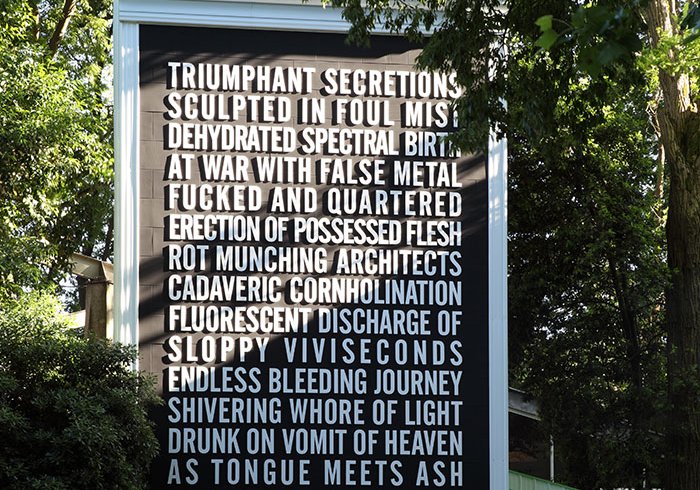 Poem for Venice, by Steven Shearer, on the facade of the Canada Pavilion at the 2011 Venice Biennale.

AA line like “fucked and quartered” possesses a certain je ne sais quoi. Later in Poem for Venice, “cadaveric cornholination” is both assonant and alliterative. And “sloppy viviseconds” (notwithstanding the lack of such a thing as a “vivisecond”) feels evocative. But, as Rudyard Kipling so primly asked, is it art? For our convenience, that question has been answered. A team of four senior art minds, assembled by the National Gallery from all corners of the country, sat in a boardroom in Ottawa one day last June and chose Vancouver’s Steven Shearer to represent Canada at this year’s instalment of the art world’s most significant event, the Venice Biennale.

Shearer, an amiable man in his early forties, has made a habit of messing with convention. His work is peopled by working-class men, hippie haired like him, who appear in rough collages, or in punch-drunk paintings that vibrate with the colours of Edvard Munch. Shearer is a sculptor, a painter, a text artist, a collagist, and any other artistic type that enables him to capture his theme: a cultural underclass. It would be easy to look at the guitars and shirtless, drunken teens and assume his work is about death metal, a violent sub-genre of metal music with a decidedly nasty reputation, but his focus is actually on the fans, not the music itself. He has a deep and affecting sympathy for those frustrated souls. One of his best collages shows row on row of tool sheds, the modest containers in which boys with guitars who will never be stars play out their enormous dreams.

He has written more than a hundred poems inspired by death metal’s scatological, obscene, and violent lyrics. For the Biennale, he rendered the aforementioned Poem for Venice 9.2 metres high. The letters, cut from man-made Corian stone, are forty centimetres tall and form six-metre lines of text. The resulting epic mural, a black and white page magnified to the size of a three-storey building, makes a confrontational and weighty riposte to any lingering notions of Canada as a please-and-thank-you country. The huge poem serves as a false front on the exterior of our squat octagonal pavilion, an unfriendly giant that rubs elbows with the fascist architecture of the German pavilion on one side, and the colonial-style British pavilion on the other.

When I visited him at his Vancouver studio before the Biennale launched, I asked Shearer, who is disarming and gentle in person, whether he thought his work would offend. “Well, I don’t know,” he said. “I think of it as more an affirmation, you know? The text is egalitarian, in that it condemns everyone.” Still, there are those, beyond the permissive Biennale set, who won’t be subdued by the knowledge that the piece’s offence is universal. I refer to the “Is it art? ” crowd. And their opinion counts.

Under Stephen Harper’s government, funding for the arts has been massively curtailed. The Department of Foreign Affairs and International Trade has ceased to fund the Canadian pavilion in Venice. Sixty percent of this year’s $1.2-million budget has been covered by the private sector, along with the BC Arts Council; another 20 percent comes from merchandise sales; while the remainder was provided by the Canada Council for the Arts. Justifying “offensive art” to various funders, then, is as important as it is difficult. Reid Shier, the director of Vancouver’s Presentation House Gallery and one of the adjudicators who selected Shearer, feels that mounting Poem for Venice was “quite brave.”

As for my own abused sensibilities, I came to realize that there was nothing in Shearer’s text that explicitly offended me. We get signals from words like “fucked,” “erection,” and “vomit,” but no race, no creed, no religion is attacked. Actual death metal music is not so ambiguous. The lyrics often glorify violence, denigrate religion, and degrade women. Its cousin, black metal, which Shearer also draws from, is populated by bands that have been linked to murders and church burnings. What interests the artist, though, is the medium more than the message; he subverts the genre by denuding it of its content and offering pure style instead. You see the effect in all his text pieces. When he showed some of his poems, rendered in charcoal lettering on rag paper, at the Power Plant gallery in Toronto in 2007, they displayed a spree of undirected, almost comical lust and rage, with phrases like “suck my unholy vomit,” “infernal discharge,” and “ablaze in viral flames.”

I presented the text of his latest work to several artists and received, to a person, the same response: everyone felt others would be offended by it, even while insisting that they themselves were not. Despite the nervous air surrounding Shearer’s work, it points out that some of us have lost the knack for taking umbrage.

Perhaps the best-known contemporary attempt at profanity in art is the 1987 photograph Piss Christ, which depicts a plastic figurine of Jesus on the Cross submerged in a glass of the artist’s urine. Andres Serrano’s work inspired red-faced condemnation from the political and religious establishments. United States senator Jesse Helms used it as a moral bludgeon in his crusade against the National Endowment for the Arts. “[Serrano] is not an artist,” Helms said. “He is a jerk.” That Helms insisted one person couldn’t be both tells us something about how many artists he had actually met.

Twenty years later in New York, Cosimo Cavallaro created a life-sized nude sculpture of Jesus, cast in ninety kilograms of dark chocolate. What I love about My Sweet Lord isn’t the work itself, but the global and inflamed reaction it inspired. Catholic groups effected the cancellation of its original display at Manhattan’s Lab Gallery; and Cavallaro, who received death threats, reputedly snuck the piece around town in a refrigerated truck. Could he have asked for any better publicity? The work had succeeded before anyone even saw it.

It’s easy for an atheist like me to enjoy work that “goes there” when “there” is the place I hang my hat. A real challenge presented itself with Guillermo Vargas’s infamous 2007 show Exposición No. 1. Vargas paid two Nicaraguan children to catch a street dog for him, then tied the animal to a gallery wall and let it starve to death, or so said the countless bloggers who erupted in protest (the gallery owner insists the dog escaped after one day of imprisonment, and indeed the work may have been an elaborate hoax). More than 1.5 million people—the vast majority of whom never saw the piece—signed an online petition to condemn Vargas’s work. His career was made.

Shearer’s mural, in contrast, derives its power and profanity not from extreme visuals but from clean-edged text. He manages to be generally offensive without throwing a stone at Jesus, or a dog, or any one thing. He told me he carefully chose his morsels of gruesome words so as not to attack a specific target. Likewise, inside the pavilion, a book lies splayed open on a plinth like a Bible; it contains 127 more poems of his. All are as gory as the exterior piece; all are pulled from hardcore metal songs. But because the text is poetry and not a straight narrative, it has the same sneaky advantage that abstract paintings do: the meaning is indeterminate, and therefore if it’s offensive, you’re hard pressed to say exactly why. You can’t condemn it if you can’t make it out.

In our text-engorged society, as messaging and media reach a fever pitch of casual interference—one handwritten letter becomes five emails becomes twenty text messages becomes 100 tweets—we are so drenched in communication that we’ve grown numb and unshockable. Shearer’s massive poem underscores how text has been cheapened and has lost its power amid such high volume. When we stand at the base of a 9.2-metre-high mural and stare up at letters that resemble chiselled marble, letters that look like some new testament from God, the text becomes a physical force and a graphic affront in itself. Shearer didn’t write his dirty words with spray paint; or spatter the text in blood, the way an actual death metal band would. He calmly built a classical monument.

As culture speeds up, it matters more that artists such as Shearer make us consider the messages that batter our poor heads, day and night. Because losing a sense of the profane—losing the notion that words and pictures have real power—means more than just the loss of our prudery; it indicates that we’ve lost our ability to recognize the sacred. Shearer’s text piece constitutes a heroic attempt at drawing that distinction, even if it is, as he told me, “a little like I’m dropping my pants.”

Underneath the “fuck you” of the facade, Shearer has built a 1.5-metre-high tool shed door that leads into the Canada Pavilion. Visitors crouch through and find something sacred inside. On the walls hang extraordinary paintings of tender, melancholic young men. Shearer’s brush style and palette draw from historical work, recalling paintings by Toulouse-Lautrec. The canvases are serious and reverent, and seem anachronistic. These images bring art history rudely alive with subjects we recognize from contemporary life. Shearer is a master of the dance between mannered, far-sighted comprehension and close-up, bacchanalian self-obsession. He is not of heavy metal himself, though he did practice the electric guitar in his suburban youth. And the fan boys he paints were never going to be truly part of the genre either. He’s painting wallflowers, the guys with the ripped shirts and pimpled faces you see leaving a concert, vibrating with reflected passion and rage. Shearer looks on it all with a clear eye and finds it beautiful.

All the same, I was impressed that such venom could emanate from this sleepy-eyed artist, so I asked him, “By the way, what kind of music do you listen to? ”

He blinked at me a bit and said, “Oh, you know, Glenn Gould.”

Michael Harris is the author of Solitude and The End of Absence, which won the Governor General’s Literary Award. A faculty member in the Banff Centre’s literary-journalism program, he currently lives in Vancouver.
Sebastiano Pellion Di Persano 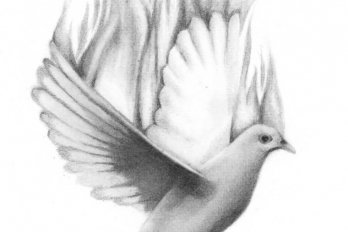 I Understood Our Time Was Running Out 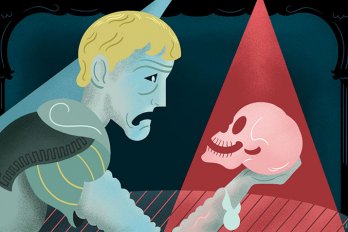