Ron Weasley Made Me Sad | The Walrus
Skip to content 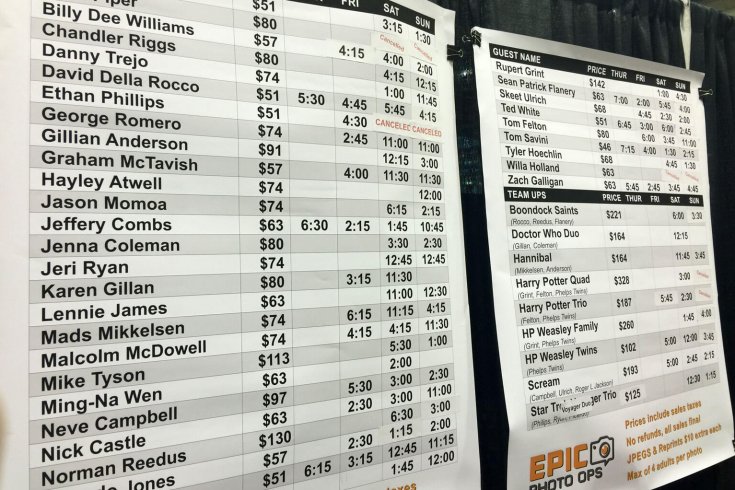 Fans of the TV show Entourage will remember the second-season episode in which Johnny Drama (Kevin Dillon) heads to San Diego’s Comic-Con International, dressed in prop-wardrobe Viking costume. Drama, we learn, had appeared in a (fictional) show called Viking Quest, starring as the warrior Tarvold. On the fan-convention circuit, Drama explained, he could rake in big money by signing autographs, and set conventioneers’ hearts aflutter with Tarvold’s signature cry of “Victory!” On Entourage, this seemed funny. In real life, I recently learned, it’s sad.

On Sunday, I took two of my daughters to the 2015 instalment of Fan Expo Canada, billed as “the largest Comics, Sci-fi, Horror, Anime, and Gaming event in Canada.” More than 100,000 fans show up annually for the four-day exhibition, which now sprawls over both buildings of the massive Metro Toronto Convention Centre. Under one roof, I was able to meet a life-size My Little Pony, compete in a Catan tournament, playtest emerging console video games, commission custom panels from famous cartoonists, pose with life-size Futurama characters, buy a fully functional 3D-chess set, and generally revel in all the various subcultures that the rest of society stigmatizes as dorky and juvenile. My girls and I have been to Fan Expo Canada three years in a row, and we always have a good time.

But my daughters are getting older. This year, for the first time, they were after more than just a Harry Potter wand and a Gryffindor T-shirt: They wanted to meet the real-life Harry Potter movie stars appearing at Fan Expo. Expecting to encounter nothing more than a real-life version of Drama’s Viking Quest subplot, I acquiesced, and we wandered over to celebrity row.

I was shockingly naive about how this process works. Before Sunday’s celebrity adventure, I’d assumed that one could mingle about and snap pictures with fan-con celebs for free, taking out your wallet only when you wanted a signed photo.

In fact, the best way to describe Fan Expo’s celebrity protocol is as a sort of Chicago Mercantile Exchange for human beings. Instead of live cattle, lean hogs, skimmed milk powder, cash-settled butter, and softwood pulp, this big board (displayed above) lists prices for Billy Dee Williams, Gillian Anderson, Danny Trejo, Neve Campbell, Norman Reedus, Skeet Ulrich, Zach Galligan, and fifty other stars and quasi-stars. The precision of the numbers suggests a fine-tuned demand-driven adjustment process that any commodities trader would recognize. Williams (Lando Calrissian from Star Wars, but you knew that) was listed at $57. Anderson (X-Files): $91. Danny Trejo (Machete): $74. Neve Campbell (Scream): $97. Norman Reedus (The Walking Dead): $130. Skeet Ulrich (Jericho): $68. Zach Galligan (Gremlins): $63. Just my luck: Rupert Grint (Ron Weasley, Harry Potter’s red-haired sidekick) was listed at $142—highest on the board. I wanted to bail out. But having made the mistake of getting dragged this far, turning back wasn’t going to be a good-dad move.

And it got worse. Fan Expo also sells “Team Ups”: Photo-ops that allow big spenders to pose with multiple cast members from the same show or movie. In the case of Potter fans, $260 gets you the “Weasley family”—featuring not only Grint, but the two actors who play his fictional twin brothers Fred (James Phelps) and George (Oliver Phelps). The twins alone could be had for a mere $102, but my daughters convinced me that the family plan offered “the best value.” A second print: another $10. Digital copy: That was extra, too. With frames and tax, I was in for well over $300.

For that money, you’d expect VIP treatment. But no: Even after prepaying in full, we were just three bobbing heads amidst a giant herd of fandom—all of us waiting for our celeb’s name to be shouted out, so we could be sluiced down the appropriate gangplank for suckers. “Gillian Anderson!” a staffer bellowed into a bullhorn. Parts of the crowd screamed, tittered, and surged toward the photo rooms. Then came “Hannibal!” and “Reedus!” and “Weasley Twins”—then, finally, after we’d been standing around for half an hour, “Weasley family!” It shocked me how aggressively I surged forward with my daughters and the rest of the Potter fanatics. After what I’d paid, I was not going to miss this close-up. I’ve boarded flights to Florida that were cheaper.

Five-and-a-half seconds. That is how long, per capita, the process takes. As the line marches forward, one staffer tells you to get your photo face on (the girls behind me spent five minutes nervously debating whether to do smiling or serious), then the next one gently grabs a hold of you and embeds you deftly into the Weasleys, who stand there smiling and unmoving like wax statues. “One, two . . . good!” shouts the photographer, the “good” being the code-syllable for both “photo taken” and “bodies out, bodies in.” If someone’s eyes are closed, the photographer takes another shot, which requires an extra second. But by my count, these pros were moving at least ten groups in and out every minute. Fifteen minutes of that, at $260 per shot. Do the math. One born every minute.

As a dad, you always want your gifts to be met with squeals of delight and appreciation. But I can’t say I was disappointed to hear my nine-year-old mutter, in a somewhat stunned tone as we were being hustled out: “Really? That’s it? ” She’d assumed—and I did, too, I suppose—that we’d have a moment there with the Weasleys, a meeting of eyes, a shaking of hands, a smile . . . maybe they’d ask us what our favourite movie was, and pretend to care when we answered. But all of that would have added precious seconds to this dehumanizing assembly-line process.

Even small children, it turns out, are smart enough to know that the whole thing is a fantastic rip-off. I’m forty-six, with a good job: I can afford to waste money now and then. But almost everyone else around me was half my age or younger. Most of the money being spent here, I’d wager, had been earned at minimum wage.

The concept behind Fan Expo and other omnibus fan conventions is unusual. Most mass-attendance events are uni-tribal in nature. When you’re going to the bathroom at a baseball game, and you hear the stadium crowd’s muffled cheer through the concrete wall, you have a pretty good idea what’s happened—a run scored for the home team, or a spectacular defensive play, depending on which half of the inning you picked for a bathroom break. Zip up and get out there, maybe you’ll see the replay on the big screen.

But fan cons aren’t like that. When you hear a cheer from some distant corner of the convention floor, you have no idea what’s happened. Maybe someone won a competition in a video game you’ve never played. Or a star from a long-gone medieval cult movie has made an appearance. Or a winner’s been announced in the Adventure Time costume contest. No one from outside the affected sub-cult raises an eyebrow. It’s one big pastiche of festishists, and what turns my crank almost certainly won’t turn yours. From my perspective as a lifelong nerd, that’s the very best thing about these events: free to be you and me, no matter how uncool and weird either one of us may be.

The reason I felt sad and hollow after meeting the Weasleys wasn’t that I’d spent a lot of money. It was that in the space of just five-and-a-half seconds, that entire free-to-be-you-and-me conceit got turned on its head. When it comes down to the big money, it’s actually not okay to be unpopular or odd: It’s all there in black and white on the human mercantile exchange, like the middle-school social hierarchy that Greg Heffley meticulously tracks in Diary of a Wimpy Kid. Drop below $50, and they don’t even put you on the big board. (You’re on notice, Lando.)

It doesn’t matter if you’re a princess or a space warrior or a talking pony: You have a price on your forehead, and what that price measures is fame. Celebrity worship is the lowest common denominator of popular culture. And if you can’t escape it at Fan Expo, a supposed celebration of subcultures, what hope do the world’s geeks really have?

“Fleeced,” “Rip-off,” “Sucker”—I’ve used some strong language here. But in fact, Fan Expo and the Weasleys were scrupulously honest. They promised me a photo for a printed price. And that’s exactly what they delivered. And it’s a great shot: Everyone’s beaming. We look like fast friends. Perfect for generating social media likes and green-envy emoticons.

I feel sorry for Grint and co., to be honest. For all the money they made at Fan Expo, it really is a profoundly undignified way to make a living. The process requires them to mimic, in as close a fashion as possible, a two-dimensional cardboard cut-out of a real human being. I have no particular insight into the minds of celebrities, but I find it hard to believe that the dehumanizing nature of these interactions does not, in time, metastasize into a contempt for the participants, themselves included.

“People don’t realize how emotionally exhausting it is,” one Fan Expo veteran told me. “I’m just a comic-book artist, not on the level of Harry Potter celebrities. But even in my case, some of these people come up to my booth and they’re shaking because they’re so nervous. I might only say a few words to them, but I have to be really careful with every gesture—because I know they will remember this interaction for years. You do ten hours of that, and it drains you. After the show, I just cannot speak to another human being. I go up to my hotel room and stare at the wall for an hour.”

After hearing that, I looked down at that Weasley family photo I bought—happy smiles as sweet as chocolate frogs. But what did the Weasleys do when the photographer said “one, two . . . good” for the final time on Sunday? If $260 bought me a straight answer to that question, I’d gladly pay it.