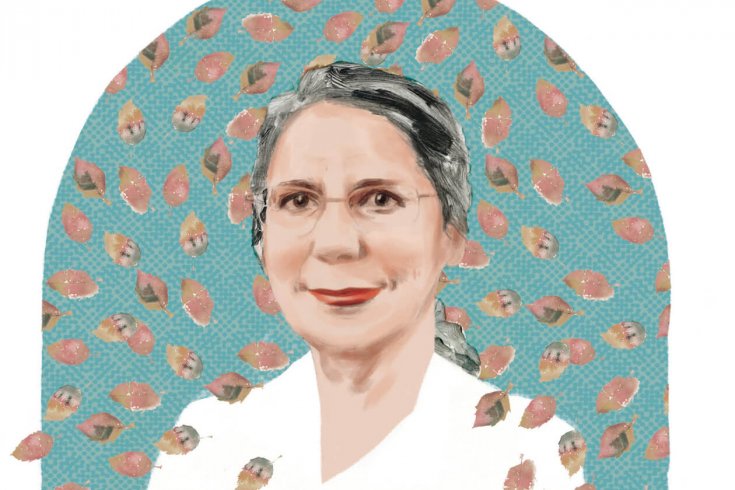 My favourite poem by Robyn Sarah is a single sentence running in short, jagged lines halfway down the page. Called “Echoes in November,” it starts by reminding the reader that “correspondences are everywhere” and that things can “borrow / essence not their own,” before vividly depicting a kitchen scene in which leaves streaking past a window are juxtaposed against a figure chopping vegetables. The knife wielder then pauses to savour:

…a stub
of vegetable not destined
for the pot,
and faintly tasting
at the back of the palate
the ghost of a rose
in the core of the carrot.

The simplicity and directness of that exemplary ending is why Sarah’s work stands apart from much of contemporary Canadian poetry. The moment is tangible, the “correspondence” between rose and carrot evocative and startling. In eleven ordinary words—twelve syllables—the final two lines re-enact Sarah’s encounter with the mystery of “a stub / of vegetable” in a way that allows the reader to feel a similar cross-current of awe.

Sarah grew up in Montreal during the ’50s and ’60s where, as a young woman, she studied philosophy, music, and English. Montreal is where she still lives and where her poetry is fiercely rooted. Her streetscapes bustle with the vibrancy of that cosmopolitan city: her narrators tromp its sidewalks and haunt its balconies. To read Sarah’s poems is to enter a timeless world of leaves, rain, snow, wind, windows, rooms, sidewalks, street lamps, sun, shadow, and hats. She writes plainly, with the reader always in mind. Her aim, she has said, is to create poems that “resonate from” her experience while leaving “room for a reader to hear his or her own experience.” Sarah’s entire career is an antidote to the pervasive anxiety about poetry’s incomprehensibility. Her poems won’t attempt any impromptu linguistic moves. They won’t tie your intellect in knots. They won’t go rogue with syntax nor will they OD on jaunty colloquialisms. In fact, they won’t try anything trendy—nothing “new,” nothing in.

What a Sarah poem will do is inhabit a change in atmosphere, both internal and external. Sarah waits to be caught unawares by a fragment of unconventional or understated beauty—such as an earthworm (“Pink as discarded chewing gum / it comes to the surface in rain”) or a wall (“I like a white wall, / a good lamp, shadows / of leaves, I can live with these / a long time”). Then she does her level best to reveal, in unadorned language, her altered perspective. “All my certainties, if I ever had any,” she writes at one point, “are out the window now.” The majority of Sarah’s poems perform this journey in a few tidy stanzas, less than a page. Canadian poets are known for their long, chatty verse. A poem by Sarah could fit in the palm of your hand.

In a remarkable mix of stubbornness and dedication, Sarah has maintained these qualities throughout her four decades as a published poet. She’s written dozens of reviews and essays on the craft of poetry—many of them collected in Little Eurekas: A Decade’s Thoughts on Poetry (2007)—and has consistently praised poets for work that, in her words, is “muted, modest; mostly free of excess.” But she hasn’t always been happy to be identified in this way. She has, in fact, complained about all the attention paid to her quotidian subject matter because of the directive in her 2002 poem “Bounty” to “make much of something small.” In a recent interview, she counters that, “It isn’t the smallness of a thing that prompts me to write about it, but rather what it evokes, the metaphoric resonances I sense in it.” Still, it takes a poet with a deep respect for the seemingly unremarkable to sense those resonances in the first place and to draw them out.

Her new book, out last month, Wherever We Mean to Be: Selected Poems, 1975–2015, collects the best of those quiet epiphanies. Containing nearly 100 poems, the book is refreshingly compact. While there are a few heartbreaks (I’m saddened by the absence of “Belief,” in which the narrator declares that, given the choice, she would be “a dry, curled leaf-boat, drifting on the / surface above its own perfect reflection”), Wherever We Mean to Be showcases Sarah’s gifts: her visual clarity, no-nonsense voice, compressed language, rhythmic prowess, and metaphoric agility.

These qualities spring from a long-cultivated focus and bespeak a writer who pays fierce attention to the basic fact of being in the world. We have the defiant “Maintenance,” in which the housework-laden narrator asserts, “There’s no poetry / in scraping concrete off the high-chair tray / with a bent kitchen knife.” There’s the breezy “Villanelle for a Cool April,” which contains a lovely iteration of Sarah’s poetic creed: “I like a leafing-out by increments / —not bolting bloom, in sudden heat begun.”

Sarah aims to write universal poetry, poetry that moves beyond the personal “such that it ceases to be one’s own and becomes everybody’s—becomes public.” That ambition has made her one of the nation’s most notable poets (she was awarded a Governor General’s Literary Award in 2015). But on the other side of nine collections, the firmness of Sarah’s calling—her unflagging certainty in her poetic method and the conclusions she generates from it—emerges as both her great strength and her great weakness.

Canada is awash in urgent, linguistically inventive poetry, much of it—from the work of Karen Solie to George Elliott Clarke—rising out of a troubled social, political, and environmental awareness. Sarah’s style is less showy, her concerns the old standbys: love and death, hope and despair. It’s the lack of contemporary hand-wringing that makes this survey of Sarah’s work a refreshing, pertinent, and powerful read. As we collectively contemplate extreme weather patterns, global terror attacks, and the advent of driverless cars, Sarah remains attuned to our basic human curiosity, our eternal sense of confusion and wonder.

“Station” is a classic example of how Sarah mines her metaphors from the everyday. The narrator and a companion “come to a halt” before a scene of gulls walking around the spaceship outside a science museum.

The gulls are white as envelopes,
and circulate. The stationary
hull reverberates with gleam.
Not what we came to see—
two travellers, refugees
of our own pasts,
come for the day on business—
still, we have
(for no clear reason to be fathomed)
to pause here, hand in hand,
trying to net a thought

Sarah stages the motive behind that pause—“to net a thought”—lucidly, without fuss or artifice. Note how efficiently the verb “to net” embodies both image and metaphor (the image enacting and enhancing the metaphor), how the “aw” in “thought” neatly echoes that of “pause,” and how the sensation of butterfly-catching a fleeting idea is captured in the repeated final consonants of “net” and “thought.”

It would be only a slight exaggeration to say I could randomly flip to almost any poem in Wherever We Mean to Be and pull out a similarly apt and revelatory metaphor. The way that, “Something has jarred loose in the mind. / An old grief, like a marble rolling around.” Or how the smoke “from morning cigarettes collects to hang / like a blue island on the musty air.” In another poem, it’s the way a “storm-lopped tree” will eventually correct its shape, “so time / closes around the hole in itself / left by the terrible event.” Elsewhere, a moment of reckoning is “wind filling an empty dress / hung out to air, / revolving slowly on its hanger”; a dried “sprig of unknown bloom” stands in for “a waste / of friendship, forced to flower, culled in haste.”

These are the sort of metaphors that poets everywhere dream of conjuring. Metaphors that in their clarity of sense, image, and sound create spaces for meaning to reside—meaning that is elusive or otherwise impossible to articulate, but that leaves readers with a heightened sense of recognition. A poem, writes Sarah in Little Eurekas, is like a kite. “A reader should be able to run with it, and see it lift up. The words that a poem is made of must be words that open out, to catch the winds of thought.”

But while each of Sarah’s poems is a lovingly constructed kite, readers are not always left free to fly it. Consider “Castoffs.” At the beginning of each of the poem’s two stanzas, we are told that “poignancy” resides in the discarded objects she goes on to depict: the armless doll, the “love-stained mattress in the rain,” and the “perfectly good birdcage” that offers “all the bells / and whistles—everything / but the bird.”

Sarah’s meticulous descriptions alone would have been enough to summon the poignancy of those items. To be told what to feel is deflating. Why not trust herself to evoke in her reader what those objects evoked in her? Or, even better, why not allow for the possibility of something altogether different to surface in the reader, a response she couldn’t anticipate?

Most poets occasionally succumb to the temptation to explain their metaphors. Sarah does so more often than a poet of her gifts should. “Scratch” is a delightfully melancholic poem about the struggle to invoke “tinder words” to “jump-start the heart.” Toward the end, the heart—the poem’s protagonist—sits down in the road and “waits for something / to turn it over.” But rather than leaving the reader on that open road with the poem’s long-suffering, half-despairing heart, Sarah bustles in with a line assuring us the “roomy heart” is “willing to be surprised.” She cuts short the possibilities of her poem by defining them.

This, mind you, is the same poet who can transform triads of frogs—“the long, slow / trills bubbling up in the moonlight”—into an exquisite defence of a life simply lived. Or who can turn a pebble ricocheting “off the bus stop / with the kind of ping metal only makes / when cold” into an affirmation of coincidence where “the unexpected becomes a way of saying / yes again.” If I’m frustrated, in other words, it’s because Sarah often defies the impulse at the heart of her practice: to let certainty go and embrace profound ambiguity.

That ambiguity nestles brilliantly in the “ghost of a rose” from “Echoes in November.” It’s conjured through the echoed o’s and r’s in ghost, rose, carrot, core. It reveals itself “faintly” and fleetingly and leaves the reader with a delicious wonderment, one paradoxically found in a “stub” not worth salvaging for soup.

That stub belongs within any hungry reader’s reach. Sarah offers us her metaphor here as an experience rather than an argument. We can taste its essence. We even smell it, a whiff of rose blossom mingling inexplicably with the earthy root vegetable. Sarah gives us a metaphysical mystery as a sensory object: a marvel to discover for ourselves and, therefore, to know intimately.

Anita Lahey’s most recent book is The Last Goldfish: A True Tale of Friendship.
Karen Klassen

Karen Klassen is a Calgary-based illustrator and painter. 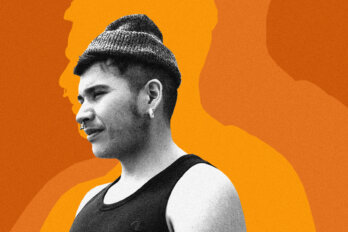 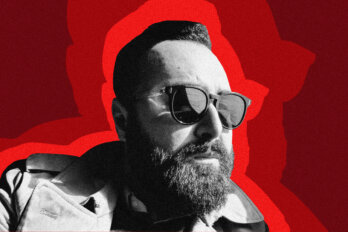 The Bar in Hell 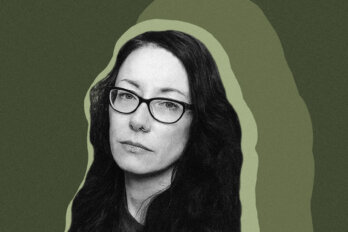