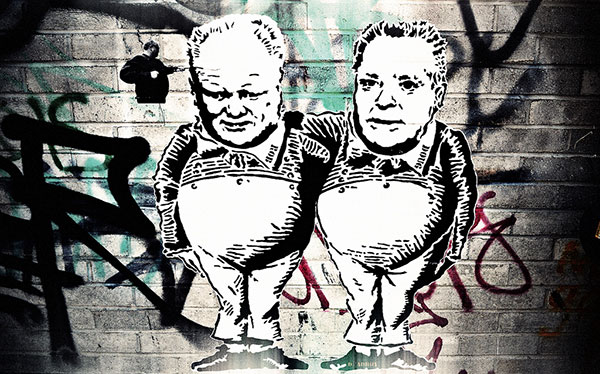 And so it came to pass that Robert Bruce Ford, Toronto’s legendary chief magistrate, once again donned his suit of scuffed armour and set out to avenge his own honour while ridding the kingdom of gravy-slurping pinkos and miscreants.

In exactly one month, the City of Toronto’s eleven-month-long municipal election season will begin, and with it, the campaign by Canada’s most infamous mayor to reprise the shockingly decisive victory he mustered on October 25, 2010.

On that historic day, almost 400,000 Torontonians cast a vote for a man already notorious for televised tirades, ethnic slurs, arrests, lies and, above all, a pose of defiance—towards rules, laws, conventions, and all other forms of external constraint—that turned out to be deeply appealing to voters weary of being told what to do and how to think.

In the three-plus years since Ford’s win, he has broken every single rule of political decorum and defied the pundits (myself included) over and over again. He continues to touch many voters, despite a record of personal misconduct that goes well beyond anything Canadians have ever witnessed in a politician. Let’s trot out all the military clichés here: Ford charges headlong into minefields, draws friendly fire, and appears to be the undisputed master of the self-inflicted political wound. He somehow manages to survive, like the bumbling cartoon coyote who is forever getting crushed by falling boulders but still lives to see another episode.

The world now knows all about Ford’s addiction problems and his strange, enabling family. We’ve all watched the routines by the late-night comedians, and have marvelled at his capacity to revel in global ridicule. But, as Rick Mercer astutely noted in a recent rant, his politics cannot be ignored.

In my view, however, those who try to understand Ford using the conventional tools of political analysis are destined to fall short. Our fascination with him is all about literature and the human condition. He is beyond politics.

Consider the problem of shame. During the recent mushroom cloud–like explosion of revelations about his drug use and Ford’s staggeringly crude language about his wife and a former advisor, many Torontonians wondered how long his psyche, not to mention his cardiovascular system, could survive the humiliation. Think of Anthony Weiner, Elliot Spitzer, Dominique Strauss-Kahn, Silvio Berlusconi. Those are the guys in the club, and they mostly buckled under the strain.

The vast majority of us, in fact, are constrained in our behaviour because of our capacity to experience shame. I don’t know if shame is a quasi-spiritual form of consciousness that masquerades as morality, or merely an evolutionarily useful survival instinct, like knowing not to have sex with relatives. But Ford evidently possesses none, and there’s something inarguably fascinating about that fact.

What would it be like to not worry about the regrettably suggestive email you sent a co-worker, or the idiocy that spilled drunkenly out of your mouth at a neighbourhood holiday party? Now, we don’t need to experiment. We can merely watch Ford and vicariously experience the transgressive pleasure of shamelessness.

The capacity for shame also implies the ability to see yourself as others do; one can surmise that Ford isn’t especially strong in this department, either. He acts—“moves forward,” to use his favourite phrase—through impulse and instinct alone, without the benefit of tactical calculation or, um, sober second thought.

In this regard, Ford brings to mind Don Quixote of La Mancha, the so-called knight errant of Miguel de Cervantes’ classic tale of adventure. When we meet Quixote, he is still an impoverished middle-aged fellow, Alonso Quijano, who has spent way too much time reading tales of the great knights of yore. Quijano is sufficiently unhinged that he believes that he, himself, has become a knight errant—a kind of freelance hero dedicated to the cause of travelling around the countryside, avenging enemies and chivalrously defending the virtue of princesses.

Quijano renames himself Quixote, suits up with the medieval equivalent of thirty-year-old hockey gear, procures a skinny mule, and persuades literature’s first sidekick, Sancho Panza, to accompany him on his mission. Along the way, the two of them pick fights with travellers who are clearly not antagonistic, and famously charge windmills thinking that they are giants. Time and again, Quixote and Sancho are pummelled, but our hero sees the conflicts only as validation, proof not of his delusion but of his calling.

Ford, too, came to office steeped in tales of wrong-doing and bravery, albeit of a municipal sort. Representing a suburban ward with few residents, he passed his decade as a councillor ministering to the saddle sores of homeowners across the city. He’d turn up to their homes in his ratty, listing minivan, and listen to their gripes about high-handed mandarins and inscrutable rules. Ford appeared in the guise of a knight errant, with a bureaucrat or two in tow, delivering solutions to afflictions like fence disputes or backed-up sewer lines. He was out there, doing God’s work in a scruffy hinterland that no one in power (read: downtown) cared about.

“My profession,” Quixote says early on, “is none other than to defend those who are defenseless, and to avenge those who are wronged, and to punish malfeasance.” And it’s all good manly fun. As he tells Sancho at one point, “We can plunge our hands all the way up to the elbows into this thing they call adventures.”

Over time, of course, these adventures—or, in Ford’s case, misadventures—beget their own literature. In the second half of Cervantes’ tale, Quixote sets out for a third “quest,” some years later, and becomes aware of the fact that the story of his earlier outings has not only been recorded in a book, but has gained growing notoriety. Many people, it seems, are eager to read about this crazy character who criss-crosses rural Spain, getting into outrageous brawls.

Quixote, like Ford, is definitely not a fan of those who have the temerity to report on his exploits: “an ignorant gossip monger,” he says of the author on the eve of his departure. Quixote, like Ford, is also deeply in denial: “It seems to me,” he says, “there’s no human history in the world that does not have its ups and downs, especially in those that deal with chivalry; they can not be filled with nothing but successful exploits.” (Everyone makes mistakes, and we must move on…)

By the end of Cervantes’ epic, Don Quixote, having returned from another 500 pages of shenanigans, lies on his deathbed in his village. He has, it seems, emerged from the refracted literary world of his delusion, a world in which his craziness became a true-to-life fiction embedded in a novel.

Will Rob Ford ever arrive at a moment of self-awareness and clarity? Who knows? Perhaps some modern-day Cervantes will offer Ford and his insane family their own reality show—one that allows us to tune in every week to his, well, quixotic quests, and all that compellingly demented behaviour.

In this show (not to be confused with an online version of the Sun News one-off Ford Nation), as in all such programs, a well-appointed host interrupts the zany Fordian reality from time to time. As they relax on a couch on another part of the set, the lights low and intimate, the host will invite our single-minded knight errant to step outside his bizarre narrative and reflect on what’s been happening.

The show could be called The Highlight Reel.