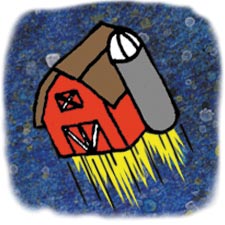 Last April, when the cold air still nipped at his ears and fingertips, Aaron Boleyn, a baby-faced eighteen-year-old, woke each morning at sunrise to pull on his blue jeans, lace up his new steel-toed boots, and walk through the long, dew-covered grass to begin another day at Bantry Bay, an organic vegetable farm northwest of St. Andrews, New Brunswick. One of six apprentices in the Grow a Farmer pilot program run by the Atlantic Canadian Organic Regional Network (ACORN), Boleyn forked out $1,600 to learn the basics of organic agriculture—soil management, driving heavy equipment, how to coax heirloom tomatoes up a trellis—over the 2013 growing season. He had planned to join the military, but changed his mind when he saw so many farms closing around his hometown of Saint-André-LeBlanc. “I just want to grow good food for my community,” he said, walking toward the greenhouse where he had started a tiny forest of seedlings.

By the height of the busy August harvest, his boots were broken in. Some days, he worked thirteen hours, and the farm’s three spare bedrooms were filled with a rotating cast of WWOOFers, volunteers from Worldwide Opportunities on Organic Farms. (Boleyn bunked in a small cottage with a rotting wooden porch, flanked by an ersatz hammock fashioned from a grubby white plastic ground cover.) He was barely recognizable: his face was suddenly long and lean, tanned a tawny caramel, and a bushy beard skirted his jawbone. His hands, once soft and white, resembled those of a labourer, patterned with spiderwebs of dirt. The waning moons of his fingernails were a dark grey. “I had to punch another hole in my belt,” he said, lifting his shirt. “My mom wanted to know why I lost so much weight.”

Every time a farmer retires and the next generation takes off for the city, more knowledge is lost: of pests and how to fight them, of soil and how to enrich it, of tractors and how to fix them. Then there is the problem of land: unless young farmers inherit an acreage, it is often too expensive.

The facts of biodynamic farming

Biodynamics, an organic agricultural philosophy conceived in the early twentieth century, views farms as whole, living, and self-sustaining entities influenced by cosmic forces. In practice, this means scheduling farm work according to the phases of the moon and the positions of the planets. It also requires the application to soil, crops, and compost of eight specific compounds, produced by such means as fermenting manure in cow horns—which reputedly channels the “forces” into the fertilizer within. Many eminent winemakers, including Lalou Bize-Leroy of Domaine Leroy in Burgundy, France, are committed practitioners, believing that wine produced this way better expresses its terroir. While skeptics dismiss the method as unscientific, a 2002 study published in the journal Science found that soil on biodynamic farms had greater microbial biomass and diversity (two indicators of fertility and health) than on organic and conventional operations.

Boleyn’s grandfather, like so many of his generation, gave up his farm decades ago, and his father became a mechanic—a steadier, better-paying job than harvesting turnips in their small village outside of Moncton. The number of farmers in Canada fell by 10 percent from 2006 to 2011; half are fifty-five or older, and many have no one to take over from them.

“There’s a real starkness to this, because the generation before us has such an extreme aversion to this life,” says Katherine McCord, one of Boleyn’s mentors at Bantry Bay. She left Vancouver nearly eight years ago to revive an abandoned dairy farm owned by her brother-in-law’s family. The property, jointly managed by her and two other farmers, now supplies local restaurants with a vast array of vegetables and runs a thriving Community Supported Agriculture program. “If you’re making this choice,” she says—rather than being forced into farming by your parents—“you’re willing to sacrifice so much more for it.”

It’s a good thing, too: Bantry Bay’s second season growing corn hasn’t gone so well. McCord peels open cob after cob to examine them for bores and corn earworms. Squatting beside a big pile of the stuff, she uses a paring knife to top the cobs and hunt down the brown worms that are squirming their way through the kernels. Still, this harvest will be better than the first attempt, when a bear destroyed the entire crop. Watching the discard pile grow, fellow farmer Mike Hadfield recalls the year they had to take turns staying up all night to keep the deer away.

Many of the starry-eyed recruits who spend their summers here won’t make the leap to farming. “We are not going to hide that you will work in all sorts of weather, that you will be up at all hours, that you are going to be completely guided by Mother Nature,” says Lucia Stephen, ACORN’s program coordinator.

In 2005, about 71 percent of small farms, those with sales of $25,000 or less, didn’t make enough to cover their expenses, which means many farmers or their spouses must work another job to make ends meet. “Choosing a life of farming is choosing to be poor,” observes Sara Burgess, another Grow a Farmer apprentice, but the ones who persevere don’t seem to care: for them, farming is a calling, not a job. Like so many of her peers, Burgess values the self-sufficiency that comes from being able to feed herself and others.

“I had no idea what I was getting into,” said Boleyn with a rueful smile. “I’m just happy I enjoy putting in a hard day’s work.”