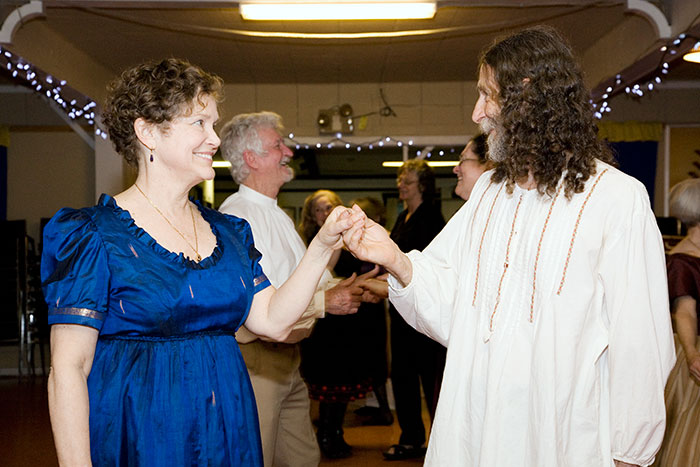 Nelson Beavington (right) and a partner dancing at the Billy Bishop Legion Hall on May 8, 2011.

My first English country dance partner is Nelson Beavington, a slight gentleman, more puckish than Darcy-ish. No matter. “I will be looking you in the eye the whole time,” he forewarns, his shaggy eyebrows lifting to reveal twinkling eyes. And we’re off.

It’s Sunday evening, and the English country dance at the Billy Bishop Legion Hall in Vancouver is in full swing. June Harman, matriarch of this scene, is tonight’s first caller. Her job is to interface between the music and the dancers from the slightly raised stage at the rear of the hall. Her instructions slip right into the piano and fiddle notes, helping the two dozen–odd dancers navigate the antique moves.

The first number is “Lord Foppington” (Harman on his Lordship: “Probably a good party boy”), a little ditty dating back to 1718, to which each couple merrily dances the shape traced by a shoe’s laces. Nelson wears a white “flouncy garment” (his words), with a woven rainbow sash loosely tied at his waist. When he really gets going, it streams behind him, as do his centre-parted locks, which take to the air in syncopation with his skipping gait. At the song’s end, we’re right back where we started, but not before weaving up and down the line to meet the rest of the dancers. Heads nod in a silent “how do you do,” not unlike the signal SWAT team members give each other before busting down a door. 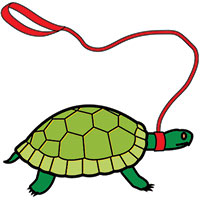 Although deemed unsanitary by several Canadian municipalities, turtles were once a favoured accoutrement of the nineteenth-century French aristocracy. It seems ridiculous: the image of a dandy in coattails and starched linen walking a turtle on a leash. However, the German critic Walter Benjamin viewed the practice as a serious, albeit unorthodox, attempt to counteract the intensity of urban life. By forcing its walker to move at a leisurely pace, the turtle enabled slow, contemplative perambulation amid the urban hustle. The French poet Gérard de Nerval attempted a similar stunt when he took his pet lobster, Thibault, for a walk around the Palais Royale. Unlike Benjamin, de Nerval had no intellectual rationale for his outlandish display. “I have affection for lobsters,” he stated. “They are tranquil, serious, and they know the secrets of the sea.”

English country dance is the grande dame of Western dance forms, the antecedent to square dancing, contra dancing, and Scottish dance alike. It dates all the way back to the seventeenth century, when the first widely published instructions appeared in John Playford’s The English Dancing Master in 1651. By the Restoration, it was the leisure activity of choice among England’s aristocracy, for whom it functioned as both social lubricant and matchmaker. Although it fell out of favour by the 1800s, it was revived by English folklorist Cecil Sharp in the early twentieth century. After World War II, a second wave of revivalists began composing their own dances, and merrymakers around the world have been enjoying the pastime ever since.

The hallmark of this form is its gentility—the consideration it requires of its participants, who not only dance with their partners but manoeuvre through countless formations with others. Manners reign supreme. “The dance has a built-in civility and courtesy and graciousness that people don’t experience in their daily lives,” says Harman, who discovered it with her husband, Michael, in 1991 (they have been holding dances since 1996). “It’s not so much a longing for a historical period as it is a longing for being treated a certain way.”

This is a grey-haired bunch, which is typical. “They understand romance—whereas a younger crowd, maybe not so much,” Harman says of her chief demographic. “And they value what it can do for their brains.” Dance, it turns out, has neurodegeneration-fighting powers: one study in The New England Journal of Medicine found it was the only physical activity associated with a reduced risk of dementia among those over seventy-five. Says Harman, who is in her early fifties, “We want [the dancers] to work their sequence memory and just flow with the music.”

Tonight Harman is decked out in a long black satin gown, with a double tier of magenta lace ruffles gracing the hem. The full skirt, combined with her height and décolletage, lends her an inexorable grace as she floats along the dance floor. From there, the scene is less anachronistic than polychronistic. One woman is dressed as a flapper. Another looks as if she strode right out of the Renaissance (“That’s Diana. She’s a seamstress,” someone remarks). One gentleman, Francis, sports white calf-length stockings that meet his knee-length trousers in a generic “style of the past,” as he puts it. In a prior life, he admits, the pants served as his favourite pair of bell-bottoms.

During the break, the participants gather loosely around the snack table, nibbling on cookies and discussing the insights one gains into another’s character through dance. (After all, it’s a public dance that sets up Darcy and Elizabeth as Pride and Prejudice, respectively.) “You learn about how playful they are or how serious they are,” says Catherine Hembling, a veteran dancer. “Or how helpful,” chimes in Peggy Roe, who calls and writes dances (she named her first “Perfect Harman-y,” in honour of June). Nelson wanders over and joins in, his soft voice straining over the din: “We learn something interesting about the spirit inside, the light, the twinkle in their eye.”

Eye contact serves as both coquette and traffic cop, providing cues for when to proceed and when to yield. “One of the charms of English country dancing is that you do all your flirting with your eyes,” says Jane Srivastava, a member of the Country Dance and Song Society, who is sitting out “Apley House,” a twenty-four-bar reel. “And you can flirt outrageously,” she adds, chuckling heartily. At several points during the evening, the dancers bust out “the gypsy,” a move where a couple turns in a tight circle, maintaining eye contact the whole time. We’re talking four beats of stare-down, enough to elicit frisson or discomfort, depending on how saucy you can serve it.

But there is much more to English country dance than meets the eyes. It has been speculated that the dance “Lilliburlero” references King James II’s bisexual antics. The recently written “Star Trek” features star formations wherein you “Klingon” to your partner. Tonight, Roe is unveiling her newest dance, “Victoria’s Secret,” which involves a peel (in which a line of dancers peel off in a circle) and cheeky calls like “bottoms up” and “tops down.” Couples zigzag across the floor, spiralling off into eddies of confusion as they endeavour to follow Roe’s instructions. The night is a treadmill: we start off the steps at a walk, pick up to a trot, and then stumble into a lope.

Three hours later, and the night draws to a close. It’s my last dance with Nelson, “A Fine Balance.” He’s in full woodland sprite mode, archly improvising steps in between beats, and orbiting far out of formation to dance with others before swooping back into place. We end in a long, hammy bow, drawn out with the piano and fiddle’s last notes. Everyone is giddy, flushed with joy; there’s something more than nostalgia at work here, something timeless. The music ends, and Nelson bows his head, putting his hands together as if in prayer. Then his head comes back up and his eyes crinkle into arcs as he reveals the best part of the night: “Dancing frees the soul!”