Reflections on the London Terrorist Attack | The Walrus
Skip to content 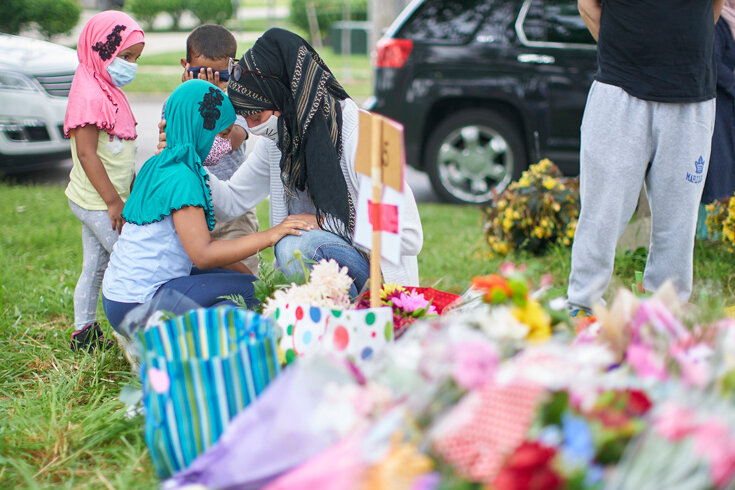 Kira Stephani of Oshawa, Ontario, talks with her daughter Aisha Sayyed at a memorial following the hate-motivated vehicle attack in London, Ontario, on June 6, which killed four members of a Muslim family and sent their youngest boy to hospital. THE CANADIAN PRESS / Geoff Robins

It’s a humid August night. My two brothers and I are in the back seat of a car that has come from Pearson airport, its trunk bulging with suitcases, and now we are driving through this sprawled city, or along what was then close to its northern edge—Fanshawe Park Road—motels and cornfields on the right and suburbs on the left, and even the window’s glass is warm against my nose and forehead as I scrutinize the darkened neighbourhoods with a vertiginous sense of fate, because wherever we stop now will be the place of our new life.

We are a mixed family—my father is brown and Muslim, my mother is white and Christian, and I exist between their colours and their faiths—and that is unremarkable to me. London, Ontario, will be different from our old home: there is a mosque and a halal butcher, and there will be culturally Pakistani gatherings in green parks, the public wooden tables covered with pots and foil trays of curries and rice, kebab smoke drifting from coal barbecues.

The student body of my high school, and the general city bodies of strangers, will still be overwhelmingly white. When I fast, some classmates will leave pop and candy on my desk each day, derisive lures away from a practice that strikes them as alien. And then, eventually, I will no longer fast, but not because of them and not because I lack a spiritual nature—it will be because I cannot accept a god, any Abrahamic god, who condemns queer love.

That is the near future, on that summer night. We stop at last at a townhouse complex, and the house my father unlocks is a corner unit like our old one. I feel it throw me that long, thin anchor line to the familiar. The rooms have no curtains so we sleep with the stars.

The far future, the one I am now attempting to inhabit through these words, happens three decades later, on a nearby sidewalk along Hyde Park Road.

It was through a Whatsapp message from my brother that I learned about last month’s truck attack in London. A family—two parents, two children and a grandmother—had been run over during their evening walk for appearing Muslim, leaving four dead. That is how news from close to home may come, with your brother’s orange name over top, with his wish that we were near enough to hug.

As adults, my siblings and I are like many people who were raised religiously and strayed: we retain small strands of practice that feel meaningful. Some among us—all right, me—still find faith compelling. That is the private side of the religious question; the public one does not ask us to speak. All three of us have had humiliating experiences at the American border. My little nephew was flagged by the Canadian no-fly list.

For the sake of solidarity, for our family histories, for love of our father and other relatives, for our father’s observance of Friday prayers at the London mosque—we are Muslim.

I do not know how London’s atmosphere has shifted since I lived there. I left before the driver of that truck was even born. And, in any case, the calibration necessarily comes from the city’s more visibly Muslim residents: Leenat Jilani, for example, wrote in the Globe and Mail that the recent violence did not shock her.

I know that, in my current city of Kingston, Ontario, I covered my hair with a prayer shawl one day to see how my experience would change. That morning, a white bus driver questioned the legitimacy of my transfer; she followed me to the back of the bus, telling other passengers that she was sick of people cheating the system. No one stopped her. The official I later spoke to on the phone insisted that the incident had nothing to do with discrimination.

This is part of what aches when I consider the murders: their affirmation of a knowledge that one is constantly encouraged to repress and undermine. Like any person subject to racism, I have seen the stares of certain drivers from behind their steering wheels and felt the violence in them—and then I have told myself that maybe they have a toothache or that their animosity will at least remain confined. Because I could afford to, perhaps, with my light skin. And because I wanted it to be true. And because I had to cross the street. But also because the wider culture has pressed me to doubt my senses and endorse its massive disowning of reality instead. I hear the attempted resumption of that illusion in every aftermath—as water closes over an immersed object, as the Gorge closed over murdered student Reena Virk near Victoria in 1997—some version of This isn’t who we are.

The corner of the attack was familiar to me. I had learned to drive on those roads. For the first month or so, I was afraid of turning left—that gesture of pulling across oncoming traffic—and I planned all my routes to be in squares of right turns. My grandmother stayed with us for some months, and she took evening walks. In the picture of the murder victims, I saw her clothing and the way she wore her hair. I felt an almost literal heartbreak then, a dull rupture under my sternum. I was sleepless until the first bird sang in the darkness, inchoate thoughts revolving around the surviving nine-year-old boy—Who was going to tell him, and what would they say, and what in this dear world could hold him then?

The recent news had already been painful for brown people—mass graves of Indigenous children found on the site of former residential schools; sentencing in the trial for Barbara Kentner, who was killed with a thrown trailer hitch. I had felt the hurt, but nothing had upset me like this vehicular killing with its multiple proximities. Should I call that human nature?

There was the relationship to place and the resulting ability to picture the attack in some detail. The ghost trails of memories throughout those streets and the sense of trust I had allowed myself in walking their sidewalks. The searing knowledge that my family still walked them now.

And then there were the faces and clothes of the victims, the intensification of my empathy with resemblance, as if that visual recognition punctured the tired armour I wore for other atrocities; I loved people who looked like that. So there was, in me, a presence that accorded others degrees of humanity in relation to my own appearance and cultural knowledge. Like the killer, was the sudden left turn of that thought.

I took this notion of equivalence for a walk with me, past the docks and the people strolling or running or lying down in the grass and the turtles sunning on logs. There are, in being mixed race, few options for taking comfort in an us or a them—I had avoided pictures of the murderer, but I had seen his name with its roots in my mother tongue. I thought about inherent cultural responses to difference. We do love our own, and at the edges of whatever that own may mean lies the question of how to interact with outsiders. With hospitality or respect or wariness or exploitation or terror. The worst of white culture rests in those latter methods, and the pickup driver drew on them. A tweet reported that, after attending a local vigil for the victims, two women wearing headscarves were told by a someone in a passing car, “You’re next.”

The daughter of the murdered family was finishing grade nine. Her high school was near my old one, and when I was around her age, the schools had to share our building. We attended in shifts—ours was in the morning, theirs in the afternoon. Two student populations brushing past each other and not meeting; proximities and distances.

I think of what I learned in high school, not in my classes but among all those gangly, blooming, self-conscious bodies moving through hallways, standing at lockers. It was a place to start finding alternate versions of family based not on genetic, ethnic, or cultural kinship but on other recognitions. It takes an ajar heart for any form of love to spark at all. What I dread with each Islamophobic or racist brutality is that the shutting in me—which occurs in protection, recrimination, exhaustion—will become irrevocable.

Of high school, I also recall what education meant within my family: I was pushed to fast-track, subjects had value if they could lead to prestigious work, and high grades were imperative. My parents had very good intentions; doing well was considered the means to security.

We the diaspora—that almost meaninglessly wide and also deeply intimate we—have to be very clear with ourselves now. The hostile gaze over a steering wheel, the pretence of a sympathetic gaze from the white driver of an entire nation. The whole question of striving for belonging within a dominant culture that has already attempted genocide against the people whose right to be here is utterly indisputable. I read a description of the murdered as a model family, and although that phrase is meant to convey the enormous loss, its logic is discordant with what I know.

Where is the ideal immigrant of colour, the one who comes to a sleepy and suburban double of the empire’s headquarters and makes of themselves a professional, polite and capable and willing to present their culture of origin in charming portions? Find them and ask if they feel safe.

Sadiqa de Meijer’s most recent books include The Outer Wards, a book of poetry, and a collection of essays called alfabet/alphabet. She lives in Kingston.