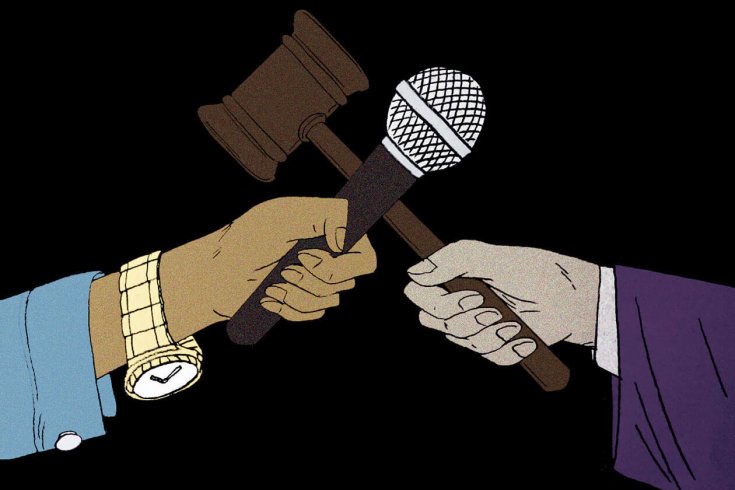 In 2010, Heartless G, an aspiring young rapper in Toronto, became the prime suspect in the deadly shooting of an alleged member of the Crips gang. One of his many songs was “Cocaine Alumni,” which included the following lyrics:

I just unload then I reload
I take that 30-30, right now it’s that 12 gauge shotty
Bullets in your chest and your throat
I’m tryna get you bodied

I don’t like being on the left nigga
It’s my nigga Heartless Man
Woop! Woop! MOB Klick

These lyrics would ultimately play a central role at Heartless G’s trial. After police downloaded seventy-six videos from YouTube, the Crown applied to have ten of those videos used as evidence of his and his co-accused’s involvement in a rival gang and as evidence of motive. The trial judge eventually admitted six of his rap videos, including “Cocaine Alumni,” “Hood Life,” and “You Don’t Really Want It,” as well as other rap lyrics. The jury was able to not only read his lyrics but watch him perform them.

Never had this many rap videos or lyrics ever been admitted in a Canadian courtroom. This material, no doubt, swayed the jury, which in 2013 convicted Chael Mills (Heartless G) of first-degree murder and his co-accused, Lavare Williams, of second-degree murder.

In the US, rap is frequently on trial, even in death penalty cases. It also appears to be a growing trend in England.

In nineteen cases, largely involving Black rappers, the Crown was able to rely on lyrics or videos as evidence of guilt or as an aggravating factor.

I began to study the issue in Canada. I looked at various databases that publish judicial decisions and media reports. There are limitations to this kind of research. Some decisions may not be published. In addition, many uses of rap lyrics by the police, as part of their investigations, or by the Crown, in a jury trial, will not show up in a relevant database if there was no formal motion challenging their use.

Nevertheless, I was able to document thirty-six attempts by the criminal justice system to put rap on trial in a recently published article “R v. Campbell: Rethinking the Admissibility of Rap Lyrics in Criminal Cases.”

The very first case I found was an attempt to criminalize the possession of rap under our obscenity laws. It involved Marc Emery, who in 1990 owned City Lights bookstore in London, Ontario. Executing a search warrant, police seized a copy of a cassette tape of As Nasty as They Wanna Be by 2 Live Crew. Emery was ultimately convicted of possession of an obscene recording.

Most of the other thirty-five cases are of recent vintage and involve attempts to use self-authored rap lyrics as incriminating evidence, as occurred in Heartless G’s case. Many of these cases involved allegations of gang-related criminal activity, although ironically, the very first self-authored rap case involved Paul Bernardo, a white serial rapist and killer. The Crown wanted to rely on his song “Deadly Innocence” and other rap lyrics about kidnapping, rape, and killing as evidence of intent and motive. The trial judge excluded the rap. It is just one of two cases I found where the judge prevented the Crown from using rap lyrics as part of its case.

In nineteen cases, largely involving Black rappers, the Crown was able to rely on lyrics or videos as evidence of guilt or as an aggravating factor on sentencing.

In R v. Skeete, for example, the Crown relied on a recording by “Ammo,” the accused’s persona, entitled “Live from the Don,” which had been posted online. At one point, Ammo raps that “real niggaz don’t crack to the coppers, muthafucka.” The Crown argued that this was evidence of motive for the shooting because the deceased had testified against the accused in another case.

In a smaller number of cases—just five—rap was relied upon by the defence. In R v. C(R), for example, the defence cross-examined a sexual assault complainant on her rap lyrics and then suggested in his closing that “the lyrics do not suggest an innocent young woman who does not understand anything about sexual activity and sexual language.”

And, in R v. Simard, rap lyrics went all the way to the Supreme Court of Canada—albeit for an unusual reason. In the original trial, the Crown did not argue that the accused’s lyrics were in any way relevant to proving its case of sexual assault; instead, it had produced the cover of the accused’s rap CD because it contained his picture. However, the trial judge decided to listen to the songs on the CD and concluded, in convicting Simard, that his lyrics reflected his propensity to rape. The Supreme Court held that the evidence was inadmissible for that purpose and ordered a new trial.

Since the publication of my research, a number of murder cases have involved rap lyrics, including the trial into Tim Bosma’s killing, in Hamilton, and the James McCullough trial, in London.

Some—including a defence lawyer who recently endorsed using rap music to put people in jail—might ask: So what? Why should we be more concerned about the admissibility of rap compared to other musical genres such as folk, rock, or opera? Or, indeed, poems or stories? Can’t we just let the jury decide what weight to put on the evidence?

Well, for one thing, rap is the only form of creative expression that ever seems to be put on trial in Canada or the US. Indeed, I was able to find only one nonrap case involving self-authored lyrics. That was in Newfoundland and involved Gregory Parsons, who was convicted of killing his mother. On appeal, the lyrics were thrown out and a new trial was ordered. Parsons was never retried because the real killer was apprehended.

But, more fundamentally, the social reality of racism exposes rap to judicial abuse.

If violent crimes were being committed by a white youth, experience tells us that the police would not, as a matter of routine, start investigating the web pages, social media, or backpacks of other white youths. However, as Toronto’s experience with carding reveals, the exact opposite occurs with Black youth. Gang violence by a few individuals inevitably leads to greater surveillance and targeting of an entire community. Indeed, data suggests that carding has led to the documenting of all Black youths in Toronto between the ages of fifteen and twenty-four. In the US, the police are specifically instructed to search for rap videos when investigating gang violence.

Moreover, rap’s commercial success and appeal is largely driven by the extent to which the lyrics appear authentic. One way for a rapper to “keep it real” is for them to rap about what is actually happening on the streets and in their communities. Rap becomes even more susceptible to misuse in the context of “gangsta” rap because writers take on criminal personas and, as two leading US experts in this area have observed, “offer embellished, graphic accounts of violence, sexual conquest, and other illicit activity.”

Given the acknowledged presence of anti-Black racism in the criminal justice system, there is a real danger that participants will be all too willing to assume that rap lyrics are autobiographical because they fit with racialized stereotypes of how Black people are involved with guns, gangs, and drugs.

So how should our justice system approach the admissibility of rap lyrics?

We first need to be honest. We need to stop pretending that rap is like any other art form when it comes to triggering stereotypes, and we need to acknowledge the very real prospect of wrongful or racially tainted convictions. Social science evidence confirms that individuals are more likely to find an accused who raps about violence guilty. That is likely even more true when the rapper is Black. We further need to acknowledge that, by allowing the criminal justice system to frequently use rap as evidence of guilt, we are criminalizing an entire musical form and culture. Finally, we need to admit that we are not, generally speaking, culturally competent enough to properly know what reliable inferences to draw from rap lyrics.

With this reflection, we can begin to safeguard against abuse. First, there must be a rigorous admissibility inquiry requiring, at a minimum, a very strong nexus between the lyrics and crime. Relevant questions to interrogate include: Is there clear evidence that the lyrics were written by the accused? When were the lyrics written? What was the purpose (i.e., commercial or personal use) in writing them? And do the lyrics contain specific and unique details that only the perpetrator would know?

In thinking about the issue of a strong nexus, it is imperative that the relevant context and interpretative evidence about the nature of rap music and the lyrics in question be given not only by a Crown expert, which historically has been a police officer (which raises additional concerns about cultural competence and impartiality), but also by a defence expert.

Even assuming there is a strong nexus, we need to find ways to minimize the inherent prejudice. For example, is there other evidence capable of making the same point? In some cases, defence counsel may have to agree to admit the fact that their client is a member of a gang to safeguard the trial from the abuse of rap as proof of guilt.

Other ways to minimize the prejudice include limiting the number of lyrics and the manner in which they are presented. The prejudice inherent in using rap lyrics as evidence of guilt is only magnified when the jury is able to repeatedly see the performance of the songs on videos, as occurred in Heartless G’s case.

The Ontario Court of Appeal will soon have the opportunity to address these issues when it hears Heartless G’s appeal. Hopefully, it will put the brakes on our willingness to try the persona rather than the person in rap cases.

David Tanovich (@dtanovich) is a professor of law at the University of Windsor.
Paul Kim