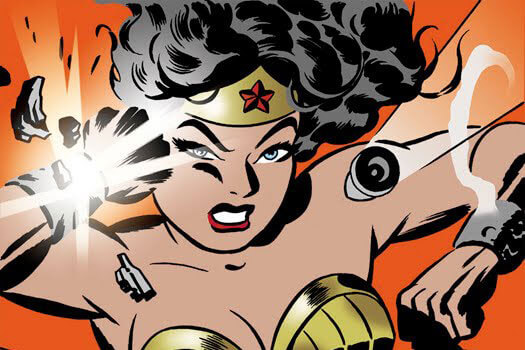 On Saturday morning, when news broke that Canadian cartoonist Darwyn Cooke had succumbed at age fifty-three to an “aggressive” cancer, the first comic of his that I reread was “The Alex.” A Fountainhead-like story of an artist’s refusal to compromise his vision, the strip is about Alex Toth, who came up in the booming postwar years of comics, and later designed Space Ghost and others for Hanna-Barbera. Toth was a craftsman whose vision of comic books and animation was so pure that he’s revered as a god among fellow practitioners, though his genius was scattered, leaving few real monuments.

In effect, however, Cooke’s descriptions of Toth’s embattled career have all the passion of a personal manifesto. “[H]e strove to imbue even the humblest of forms with an honesty and beauty,” Cooke writes, in a page laid out like a Le Corbusier grid. Here was an artist particularly attuned to “riddles of structure and form,” who “stripped away each layer of artifice and fakery,” whose “commitment to his craft could not be stifled.” Here, in short, was Cooke himself.

This brief, restrained story is far from Cooke’s better-known works. I suspect he will be most admired for his superhero epic, DC: The New Frontier, and his slick adaptations of Richard Stark’s Parker novels. Both projects provide the fullest expression of Cooke’s method: expert handicraft; a mania for mid-century detail; a penchant for tough, elegant dames and square-jawed heroes; and a commitment to reinvigorating the capes-and-tights and crime-comics genres.

Cooke produced few works like “The Alex,” which eschew genre conventions. Perhaps that’s why they stand out as personal statements. I’m fond, for example, of his 2005 poster for the Toronto Comic Arts Festival, an ebullient street scene that shows comics flooding the urban environment, from the streetcar driver reading a bubblegum wrapper to the posters plastered on walls in the background. It’s a resonant civic portrayal of Toronto the Good, the city where Cooke was born in 1962. His upbringing in the outlying suburbs provides the subject for another rare personal strip, “World’s Window,” which lovingly details the milieu of Cooke’s childhood—maple-tree-lined streets, stubby beer bottles, beaverwagons, neat bungalows—while showing the youngster setting aside his golf club and hockey stick in favour of a paintbrush.

With that telling gesture—setting colour to paper—Cooke began a life-long career in the arts. Before fully committing to comics in the early 2000s, he made a name for himself in the eighties and nineties as a successful art director and animator—storyboarding standout TV episodes of The New Batman/Superman Adventures, creating the title sequence to Batman Beyond. From those major-league industries, Cooke brought with him not only a skillset uncommon in funnybooks—where the goal is often to break into animation and movies, rather than vice versa—but also professional expectations that proved embarrassingly anathema to comics, traditionally a hidebound, backwards industry.

Cooke, like Toth, devoted much of his creative energy to the cheap-jack, low-stakes world of corporate comics, where distinctive vision and personal style are not always valued commodities. Cooke, like Toth, bristled. His early projects—a Batman psychodrama from 2000, a revisionist take on the Justice League—would sometimes take years to come to fruition. Such delays arose partly because Cooke wanted to handle both the writing and drawing—a luxury the big companies rarely afford even to established auteurs anymore—and partly because he refused to be beholden to “continuity,” the editorial policy that dictates that each superhero character comes saddled with decades of inviolable history. Unlike Toth, however, Cooke did manage to steer ambitious, innovative projects through that recalcitrant system. The most significant of these was the six-issue, 400-plus-page, Eisenhower-era epic DC: The New Frontier (2004).

The series maps the development of DC’s superheroes in the fifties and sixties onto real-world historical events, paralleling the formation of the Justice League of America—Superman, Batman, the Flash—with the coming of Camelot (JFK’s acceptance speech from the 1960 Democratic convention concludes the book). Green Lantern, in his civvies, is a Chuck Yeager-type test pilot; the Manhunter from Mars hides from paranoid xenophobes; Wonder Woman intervenes on behalf of oppressed women in Indochina; a black superhero briefly shows up in the South to combat Jim Crow, before being horrifically snuffed out.

The title of the first chapter, “Analog Heroes,” sums up Cooke’s belief in this project, and so many others—namely, that there is that in the past worth preserving, no matter how much it may seem outmoded. Throughout his career, Cooke positioned his work as the last redoubt of some bygone but sturdy ideals of valour and craft.

But Cooke wasn’t afraid to push back against that past. His 2001 redesign of Catwoman—replacing her skin-tight costumes with a sensible jumpsuit and night-vision goggles—is an eloquent critique of the way she had been sexualized for decades. He also believed that, in some cases, a character’s iconic visual identity was more important than their complicated backstories. In New Frontier, his depiction of the demise of one of the Losers (swan-diving into the maw of a dinosaur) or Hal Jordan’s transformation into Green Lantern (slowly, across a series of static panels) carries a rhetorical weight not always present in the script alone. Cooke knew how to combine foreshortened figure drawing, double-page spreads, and moment-to-moment cartooning in ways that conveyed contagious enthusiasm about costume-clad characters for whom some readers may not care a rip.

But however accomplished a superhero artist he was, Cooke’s heart seemed to be elsewhere. He gravitated to characters such as The Spirit—a halfheartedly costumed ex-cop, created by Will Eisner and whom Cooke helped reboot in 2007—or Slam Bradley, the hard-boiled dick co-created in the thirties by Canadian Joe Shuster, just before he drew Superman. “I’m really not a big fan of super-jock stuff,” Cooke told The Comics Journal; “I prefer doing the crime stuff to the superhero stuff, to be quite honest.” It’s no surprise that when he left the big superhero companies in 2009 for a project he could control every aspect of, he stepped entirely into those noir-tinged shadows, choosing to adapt a series of Richard Stark novels.

Parker is the implacable, professional criminal whose heists drive the books that Donald Westlake wrote under the name of Stark. Parker was no stranger to film—having been embodied most memorably by stoic Lee Marvin in Point Blank (1967)—but Westlake’s minimal, curt, and angular prose draws lines in the mind that almost beg to be slashed on a comics page, instead. Introducing Parker, Westlake writes, “His face was a chipped chunk of concrete, with eyes of flawed onyx. His mouth was a quick stroke, bloodless.” Terse sentences lunge forward from one to the next, just as Cooke guides the eye quickly from panel to panel: the artist had found his element.

Cooke’s adaptions of the Parker novels—The Hunter (2009), The Outfit (2010), The Score (2012), and Slayground (2013)—were instant commercial successes, but their realist and taciturn style still presented a steep learning curve for an artist so versed in cartoon and superhero conventions. Watching that resistance play out, over the course of these books, is one of their chief pleasures. You can see Cooke spar with Stark’s writing, rather than simply illustrate it. His own approach gets leaner, more chiseled, and more laconic—as well as more adventurous. In The Outfit, for example, we begin to see Cooke’s pen move briskly between styles—now borrowing shorthand from Monopoly cards, or UPA cartoons, or glossy magazine illustration, to help distinguish and liven up some repetitive robberies. In Slayground, the final installment and to my mind the strongest, we see Parker alone and besieged in an empty amusement park. The late-sixties Buffalo setting—wintry, desolate, deteriorating, unforgiving—captures an atmosphere that Cooke had aspired to create throughout series, and which was surely familiar from his Toronto upbringing.

With the Parker books and New Frontier, Cooke demonstrated his ability to breathe invigorating new life into properties that others had created. But some questioned the purpose of such exercises, particularly when Cooke and others began work on prequels to Alan Moore’s Watchmen (“What I want is for this not to happen,” Moore told the New York Times). Critic R. Fiore, writing of Cooke’s earlier turn with The Spirit, averred that the artist was “Talented enough that he ought to be creating his own characters suited to his style.”

“I don’t know if that’s important to me as it is to some,” Cooke told interviewer Tucker Stone, and often professed his admiration for action-film auteurs such as Michael Mann, Sam Peckinpah, and John Woo. In Woo’s and other Hong Kong films, he said, “It’s not that the script or the stories are original; it’s the execution. That’s where the . . . originality is.”

Still, in his projects following Before Watchmen and Slayground, Cooke was moving away from licensed properties and toward original stories, challenging himself anew. Twilight Children, which he co-created and co-owned with legendary cartoonist Gilbert Hernandez (Love and Rockets), was an oddball but welcome departure for Cooke, scrubbed of any markers of the retro style for which he was known. Set in a small seaside town somewhere in present-day Latin America, Twilight Children was released in a collected edition just days before Cooke’s death. Situated at a healthy remove from both superheroes and noir, the book revolves around the sudden appearance of weirdly glowing orbs and a sylphlike mystery woman—it’s pure B-movie fantasy, invented from whole cloth.

Even more enticing, for me, was last year’s announcement of a series called Revengeance. It proposed to follow an analogue for Cooke himself, “a graphic design editor at a lifestyle magazine in Toronto in the Eighties,” as he gets embroiled in a murder mystery among “a city full of musicians, models, agents, salesmen, hustlers and fakes”—the Queen Street scene of the artist’s headstrong youth. Just as with “The Alex,” this new book promised to transmute Cooke’s life experiences into profoundly personal art, with a main character who, Cooke told Entertainment Weekly, “is kinda based on the worst of who I was back then.”

Revengeance remains unfinished, sadly; we won’t ever get to see “the worst” of Cooke back then. But ever since young Darwyn picked up that paintbrush as a kid, we’ve always been lucky enough to see his very best.

Sean Rogers is a writer whose work has appeared in the Globe and Mail, Cinema Scope, Drawn & Quarterly, and The Comics Journal. He teaches courses on comics at the University of Toronto and York University.