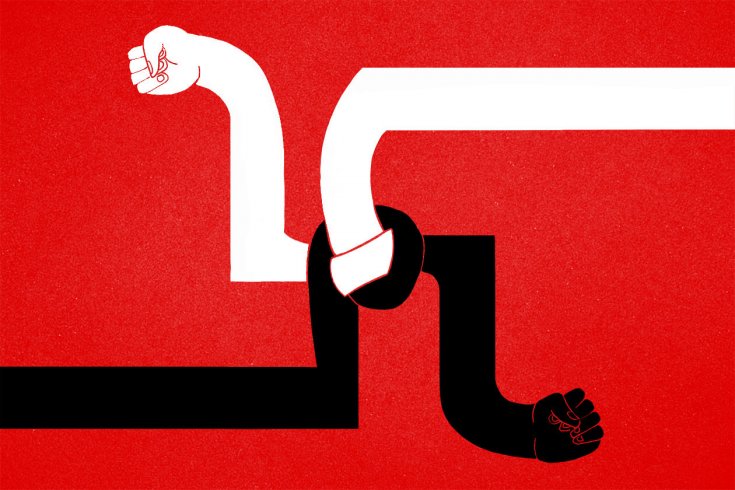 Among certain factions of the left, the sudden resurgence of white supremacy and fascism is a problem with a simple solution: ball your fingers into a fist, drive your knuckles into the face of the nearest Nazi, and share the results on social media (repeat as necessary). A tutorial emerged during an altercation in Seattle this September. One Twitter user—@bigotbasher—photographed a man on a city bus wearing a swastika arm band, and the image quickly spread. A short time later, a Facebook user shared a video in which the apparent Nazi seems to be knocked out with a single blow. Thousands liked, shared, and applauded the attack.

The incident joins a host of recent examples of political violence from the left in North America. In recent months, protesters aligned with the antifa (short for anti-fascist) movement have been filmed mercilessly gang beating a fallen man after a protest at Berkeley, California. Some have shut down speaking events across the United States, attacked the conservative political scientist Charles Murray, or thrown Molotov cocktails at police. These actions, and others like them, prompted the US Department of Homeland Security to classify antifa activities as “domestic terrorism”—though these tactics are by no means native to the US. At a Quebec City demonstration against the far-right organization La Meute this August, protesters aligned with antifa groups assaulted two Global News journalists, smashed a TV camera, and assailed police with bottles, fireworks, and smoke bombs. Given the documented ascendance of the so-called alt-right, a corresponding rise in anti-fascist violence in Canadian cities seems inevitable.

Members of antifa groups and their supporters argue that these actions are not only justified but also necessary. They believe that history reveals that fascists cannot be reasoned with—and that violence is the only language comprehensible to a Nazi. Moreover, they say that government agents—police forces, the military—are easily seduced by the far right’s fetish for law and order. According to Mark Bray, author of Antifa: The Antifascist Handbook, the movement doesn’t see “fascism as a difference of opinion that can be argued with, but as a political opponent that must be organized against” and defeated at all costs. For some antifa proponents, all political rights and civil liberties, including the freedom of speech and assembly, are secondary to the annihilation of the ideology that would render those liberties obsolete.

It would be ludicrous to suggest the moral equivalence of the fascists and anti-fascists. There is no comparison between those calling for the extermination of Jews, expulsion of minorities, and subjugation of black Americans and Canadians and the people who claim that pre-emptive violence is a legitimate response to these threats. Antifa is correct to treat fascism as a unique historical evil, one for which liberal democracies must remain ever vigilant. But the group’s argument that fascism’s historical crimes have provided self-styled anti-fascists with a blank cheque to mete out violence in perpetuity reveals a refusal to engage in serious moral deliberation over the meaning of “pre-emptive” violence. And more to the point, before applauding such violence and moving on, we should think twice about whether punching Nazis will actually bring an end to fascism itself.

The antifa movement faces criticism from across the political spectrum. People on the right describe its members as bloodthirsty neo-Stalinists hell-bent on destruction (never mind that the conservative Cato Institute reported that left-wing political violence has resulted in just twenty-three deaths in America since 1992 and that, during the same period, 219 died at the hands of right-wing terrorists). Then there are antifa’s liberal detractors who decry its uses of violence. These critics are often influenced by a highly sanitized history of protest and say that violence is always unnecessary and automatically discredits movements for social change. But as four black clergy members reminded us in a September New York Times op-ed, individuals and factions associated with Martin Luther King Jr. and the Student Nonviolent Organizing Committee “engaged in violent skirmishes, and many insisted on the right to violently defend themselves even while they proclaimed nonviolence as an ideal.” Many of today’s anti-racist liberals, the writers contend, perceive themselves “as above some of the messy implications of fighting for liberation” and are too inclined to wait for the “perfect protest.” But the perfect protest will never happen.

The problem with antifa isn’t its use of violence but that its violence is both insufficient and unexamined. As a strategy, violence alone does not work: street fighting between far-left and far-right factions leaves the social and economic drivers of fascist recruitment fundamentally unchanged, and fighting may only provide fodder for right-wing culture warriors eager to portray the left as a bunch of Stalinist goons. If, as many maintain, the sitting American president is a white supremacist, if his verbal and legislative attacks on immigrants, the judiciary, and the press betray an emerging totalitarianism, then what is required is either political action to retake democratic institutions or nothing short of revolution. Attacking frat boys brandishing torches and calling it a day isn’t going to cut it.

Antifa’s most crucial moral problem, however, relates to its zero-sum definition of fascism, which ensures that the group’s own violence takes place within a zone of continual moral exception. Antifa’s core belief—that fascist activity on any scale could potentially license a violent intervention—finds support in Bray’s point that “it would have been much easier to stop Mussolini back in 1919 when his first fascist nucleus had 100 men, or to stamp out the far-right German Workers’ Party, which had only 54 members when Hitler attended his first meeting.”

The idea that fascism cannot be reasoned with is nearly sacrosanct in the anti-fascist movement. “Only by fighting and destroying fascism can we actually defeat it,” an anonymous member of It’s Going Down, an anarchist news outlet, told Salon. Yet the physical destruction of Hitler’s armies was only the first step in a decades-long process of de-nazification in Germany. In 1945, more than 10 percent of Germans still belonged to the Nazi party. And, according to historian Tony Judt, 25 percent of West Germans still held a “good opinion” of Hitler as late as 1952. Today, recent statistics from German intelligence say there are only 5,600 neo-Nazis in the country—0.00007 percent of the population. The ideology wasn’t simply beaten out of the rest of the Germans in the intervening years—the purgation of Nazism and assumption of national guilt was a long and multi-faceted project, accompanied by a series of political, legal, cultural, and psychological revolutions in the country.

Yes, these efforts, including the banning of Nazi symbols and the censorship of Nazi literature, were backed up with the threat of violence—but that violence was sanctioned and controlled by the state. While antifa’s apologists argue that the state is impotent in the fight against fascism and that vigilantism is the only way forward, the prime historical example of successful de-nazification tells precisely the opposite story.

While we shouldn’t waste our tears on that Seattle Nazi who was punched, we shouldn’t for a second presume that he is no longer a Nazi. Physical coercion, necessary as a last resort, is a miserable de-radicalization policy. While our law enforcement and elected officials should learn from the antifa movement that fascism and white supremacy must be directly confronted and do more to mitigate the drivers of right-wing extremism, so, too, must the antifa movement learn that the antithesis of fascism is not revolutionary anarchism but democracy. The real anti-fascists are not those who claim the right to mete out extrajudicial violence as they see fit, it’s those who continue to insist that all political violence must be subjected to scrutiny, due process, and democratic accountability.

At the same time, the antifa movement’s failed approach to the problem of fascism is not itself the problem. We should reject the antifa conceptualization of fascism as an ineradicable evil that exists outside of history and context, while also rejecting the fraudulent conservative canard that the antifa movement is the moral equivalent of Nazism. We can celebrate the specific, justifiable instances of anti-fascist violence—such as the defence of Cornel West and other black clergy members who gathered in Charlottesville—while also acknowledging that the antifa movement’s general tendency toward unreflective violence is neither morally justified nor strategically effective.

Above all, we must broaden our view of fascism to recognize that the most insidious incarnations of fascist ideology today won’t arrive accompanied by swastikas and torches—they will be found in government policy that seeks actively to subjugate minorities (through the expansion of militarized police forces and racist incarceration regimes), suppress voting rights (through gerrymandering and voter-ID laws), and bar immigration or expel people from particular backgrounds. The solution to these problems lies not in street fights against torch-bearing goons but in increased activism and political engagement within the system itself. Victory against contemporary fascism involves the expulsion of hate-mongering politicians and the dissolution of their agenda, and that can only be achieved through anti-fascist policy, not extrajudicial anti-fascist violence.

Ira Wells teaches literature and cultural criticism at the University of Toronto. His work has appeared in The New Republic, the Los Angeles Review of Books, The Puritan, and elsewhere.
Franziska Barczyk

Franziska Barczyk is an illustrator, art director, and GIF maker. She currently divides her time between Toronto and New York.