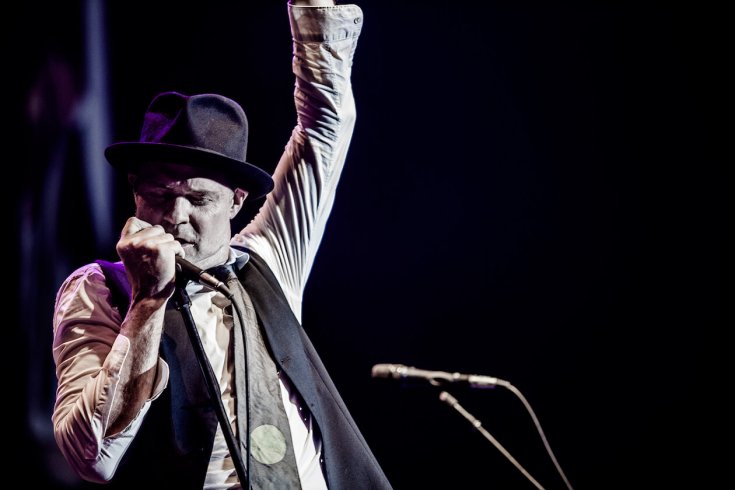 Gord Downie at the Kingston, Ontario K-ROCK centre in 2013 | Courtesy of The Tragically Hip/David Bastedo

In popular culture, a life’s final act is a rare gift. Most performers fade into irrelevance well before their artistic energies wind down. Others—Tom Petty being a recent example—exit the mortal coil suddenly, without warning, with seemingly much more left to contribute.

I started writing something about Gord Downie pretty much the moment his terminal cancer diagnosis was announced last year. It was less a morbid exercise than a practical one: as the front man and lyricist of one of the most beloved Canadian rock bands of all time, Downie’s legacy deserves discussion, consideration, celebration, and doing so in short order following his eventual passing felt as if it wouldn’t do it justice. But I stalled, time and time again, as Downie’s final act kept extending into something worthy of consideration on its own.

There was The Tragically Hip’s farewell tour—never called such explicitly, but with the subtext clear enough to compel millions of Canadians to gather in front of their TV sets and in public spaces (in my case, Halifax’s Grand Parade) to watch the nationally broadcast final show from Kingston, Ontario. Then, unexpectedly, there was Secret Path, a powerful multimedia project with illustrator Jeff Lemire that brought Chanie Wenjack’s harrowing story to a whole new generation and sparked the Gord Downie & Chanie Wenjack Fund in support of reconciliation efforts. Mere weeks ago, in late September, Downie suddenly announced a new solo record, Introduce Yourself, a double album produced by Secret Path collaborator Kevin Drew (of Broken Social Scene) due out at the end of October.

I suspect we’ll look back at Downie’s final act with great fondness and appreciation: a man running out of time, determined to make the most of what he had left. But I confess that, as it progressed, I began to wonder if it was really a final act at all. It seemed like every time Downie’s story had the perfect exit point, an ideal period on the end the gloriously evocative sentence his life has written, his story just kept going. The news of his passing this morning, thus, feels less like a full stop and more like an ellipsis that just trails off, unknowingly, into white space on the page.

And somehow, that feels fitting.

There’s a perception out there that the Hip were merely a very good bar band with a great front man—a view that doesn’t respect how the entire band (including Rob Baker, Gord Sinclair, Johnny Fay, and Paul Langlois) managed to craft a sound that felt familiar yet modern, classic even as it came fresh out of the speakers. At a time when popular music fandom was beginning to splinter—shards which, today, seem as disparate as ever—the Hip bridged underground and over-the-airways crowds. It made for an audience that was hardly without tension—picture the boorish chants of “Hip! Hip! Hip!” bellowing over acts that, foolishly, tried to open for them—but which enabled the Hip to become a consensus band the likes of which Canada will probably never see again.

So, no, Gord Downie didn’t make The Tragically Hip great on his own. But he did make them special.

He did so with a stage presence that was less “look at me” than one that you couldn’t look away from, pulling forth his notes and movements as if they were guttural expressions of elemental truths. He did so with lyrics that meshed detail with abstraction, bringing to life stories that felt rich and lived-in even as they seemed to have space for listeners to find their own meanings. And he did all of this with a poet’s poise, thoughtfulness, and, in many respects, distance. If the deceptive “ordinariness” of the Hip proved one of the band’s greatest strengths, Downie never seemed anything less than extraordinary, in ways that could be appreciated but, in the gap between artist and audience, never fully understood.

Perhaps that’s why so many seemed so eager to proclaim Downie, and the Hip, as Canadian rock icons, even relatively early in their career: it created a role for him that felt more rooted, relatable in some ways.

That the Hip became such a definitively “Canadian” band seems almost accidental on the surface: a failure to connect, commercially, in the American market combined with a handful of lyrics that made distinctively regional or national references. But dig deeper and you see a band and its singer who may not have taken on the patriotic banner literally—thoughtless flag wavers, they were not—but still proved to be incredible ambassadors for this country’s musical traditions. There were the Another Roadside Attraction festivals, for example, which were years ahead of the likes of Edgefest, Summersault, and Osheaga and created a live platform for emerging Canadian bands from coast to coast. And their songs, and especially Downie’s lyrics, play within a lineage that links them in the past with names like Cohen, Young, and Mitchell which pushes forward with Hayden, Samson, and so many others.

In Have Not Been the Same, the definitive text on the emerging “CanRock” music of the 1980s and 1990s, the authors (one of whom, Michael Barclay, is currently working on a new book about Downie and the Hip) write that “The Tragically Hip are and forever will be Canada’s band.” By extension, Downie is and forever will be Canada’s front man. We made him that way, and he never gave us easy answers or simple platitudes as to what, exactly, that means. And he was all the more fascinating and wonderful because of it.

Notwithstanding an appearance at a We Day event the following day, Gord Downie’s Secret Path show in Halifax last November now stands as his final concert. Backed by an incredible roster of players (including members of Broken Social Scene, the Stills, the Skydiggers and the Barenaked Ladies) Downie performed Secret Path start to finish in a show that, sitting in the crowd, felt primal, almost impressionistic in its pain, anger, and sadness.

To me, Secret Path wasn’t an unproblematic project; as generous and genuinely collaborative as Downie’s efforts seemed, there’s a lot to unpack in how it took the tools of largely white, settler music (Downie’s folk lyricism meshed with Kevin Drew’s indie rock canvas) to bring Chanie Wenjack’s story to a mass audience. But there is power in that approach as well. As I wrote for Exclaim! at the time, by using music typically labelled as “Canadian”—familiar, comfortable—Secret Path presents Wenjack’s story, and the residential school system more broadly, as something that didn’t just happen to Wenjack, or to Indigenous peoples and communities, but a tragedy that hits directly at the idea of Canada as a country, and one whose pain that should be felt by all of us.

It seems poignant to me that “Canada’s front man” chose not just to stay in the public eye following his band’s last concert—as obvious a curtain call a performer could possibly have—but to spend so many of his final days challenging and complicating what it feels and means to be Canadian. Doing so leaves his life’s final act as a conversation unfinished. But just like his songs always seemed to have space for us, room to make them our songs, Downie’s final days invited our participation. His last act on the Rebecca Cohn stage at that final concert last November was to turn the microphone to the crowd, as if to say “it’s your conversation now.” Now it’s up to us to figure out what to say next.