Ask a Neuroscience Expert: Why Are We So Obsessed with Pumpkin Spice? | The Walrus
Skip to content 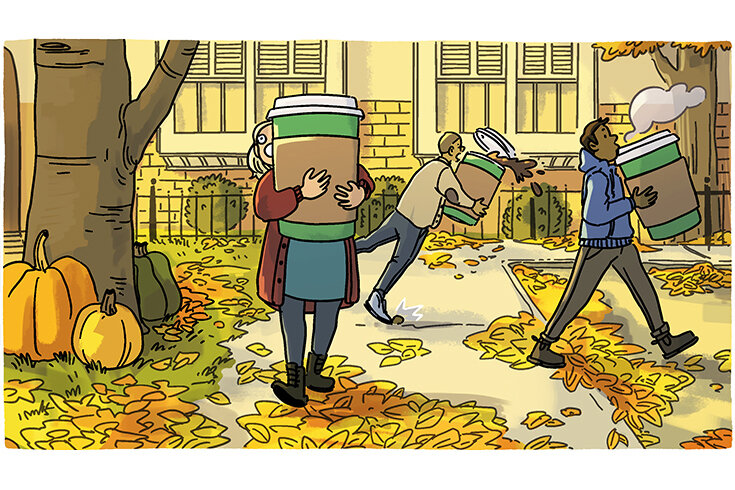 Since Starbucks launched its pumpkin spice latte, in 2003,1 love it or hate it, the flavour has become synonymous with fall. No longer limited to coffee or pie, pumpkin spice can now be found in a long list of products that includes Pringles, hummus, sausages, and cheese—and the craze doesn’t seem to be going away any time soon. We asked Catherine Franssen, a neuroscientist who works at the Science Museum of Virginia, to explain the science behind our obsession with the cozy fall flavour.

There have been criticisms over calling it pumpkin spice flavour because, often, it doesn’t contain any actual pumpkin. So what is it and where did it come from?

Pumpkin spice is a blend of cinnamon, nutmeg, cloves, ginger, and allspice that has actually been around for over a century.2 When McCormick & Company first sold a version of these spices together, in the 1930s, the idea was that you’d put them in pumpkin pie or other fall baked goods.

Around the advent of the pumpkin spice latte, there were significant developments in food technology that allowed chemists to conjure up more complex flavours that were shelf stable and could be added to a variety of new products, which boded well for pumpkin spice.

Why did the obsession with pumpkin spice really take off?

Drinking a pumpkin spice latte is a multisensory experience, involving our sense of touch, when we hold the warm cup in our hands, and of smell and taste, when we take a sip. A lot of people associate taste with the tongue, but our taste buds are only responsible for between 5 and 25 percent of the flavour we experience. The rest comes from our olfactory system, or sense of smell. Whenever something enters our mouths, smell comes up through the back part of our noses and combines with the taste receptors to create a combined flavour sensation.

Because smell is the only one of our senses directly tied to our limbic system—the part of the brain responsible for emotions and memories—scents can trigger feelings of nostalgia. MRI studies have shown that scents trigger the imagination, and pumpkin spice, specifically, can make us think of cozy fall things: feasting at Thanksgiving, spending time with family, or celebrating Halloween. If you associate happy memories with those things, you’re triggering your brain’s positive neurotransmitters, such as dopamine and serotonin—both of which are closely associated with feelings of pleasure, like contentedness, satisfaction, and comfort.

The second component of the success of pumpkin spice is that lattes and a lot of baked goods that contain the flavour are loaded with sugar and fat, which the brain responds to by releasing even more dopamine.

Pumpkin spice returns every year without fail. Do you think it’s here to stay?

The pumpkin spice movement is one of the most phenomenal pieces of neuromarketing that we’ve had in the past few decades. Fall was ripe to have something associated with it the way that other seasons and major holidays do, and pumpkin spice filled that gap. A pumpkin is a really marketable object: it’s colourful and has all of these strong visual triggers that help people evoke the things they love about fall. And, of course, the sugary sensation triggers that warm and cozy feeling people keep coming back for.

1 Starbucks has sold more than 500 million pumpkin spice lattes since the drink’s introduction.

3 Annual sales of pumpkin spice–flavoured products in the States are reported to be more than $511 million (US), according to data from Nielsen.

Catherine Franssen has a PhD in neurobiology and is the Science Museum of Virginia’s life scientist.
Irma Kniivila

Irma Kniivila is an illustrator and artist who has recently completed projects for Marvel and Boom Studios' Joyride.