Prepare to be Amazed | The Walrus
Skip to content 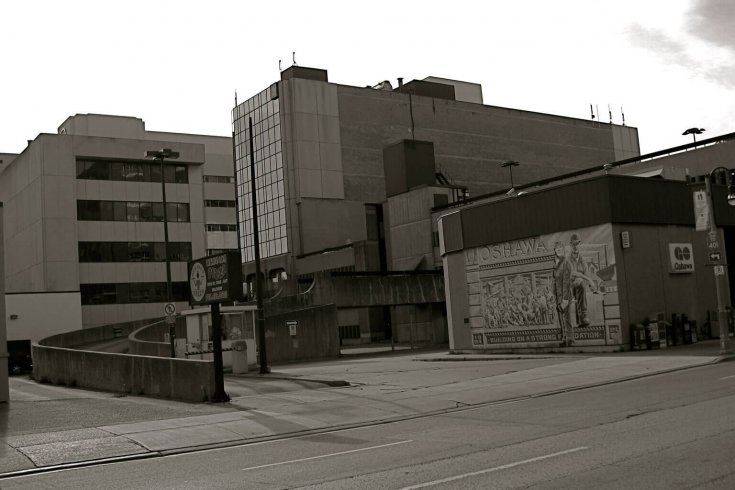 The fictional setting of Larkhill bears a resemblance to the author's hometown of Oshawa, Ontario.

“The City that Moto-vates.” For years, this was the slogan of Oshawa, Ontario, when virtually every resident was one or two degrees of separation from General Motors. But apart from building cars, Oshawa’s reputation also included unglamorous criminal elements, for being host to random stabbings and frequent mescaline trafficking. Its nickname outside the city, the “Shwa,” seemed both onomatopoeic and apt.

If you took Oshawa, distilled it, and ran it through a funhouse mirror, you’d have Larkhill, Ontario, the setting of Andrew F. Sullivan’s debut novel, Waste. This potent and disturbing book follows the diverging and converging stories of Jamie and Moses, two young men who work at a butcher shop in the city. On their drive home one winter night, they accidentally run over a lion. The lion’s owner, the biggest fish in the local criminal pond, sics his two ZZ-Top-esque enforcers on tracking down the killers of his favourite pet. The result is a step-by-step tour through the basements, bowling alleys, and hobby-shop-cum-drug-dens of the city. Each stop on the tour is punctuated by misfortune: knees perforated with electric drills, heads bashed with Dr. Martens, and bodies stuffed into buckets of slop. It’s a grisly ride that could have easily slipped into crime-novel cliché, but instead is rendered in engaging prose (“He would stand there with rust growing on his tongue, wondering what her feet looked like naked”) that prioritizes character over tough-guy pomp. Sullivan deftly paints human touches onto each character, such as Moses’s quest to find his unhinged mother, before subjecting them to inevitable miseries.

The connection between Oshawa and Waste’s Larkhill isn’t merely speculation: Sullivan was raised in the “Shwa” and rifled through the city’s old newspapers on microfiche to capture its particular flavour of crime and squalor. The devil is in his details, obvious to anyone who grew up in the city, myself included. The sad strip-club hotel along the baseline, the Dynasty, which everyone called “Da Nasty”? That was really there. The abandoned psychiatric facility, the Iron Maiden blaring from basement apartments, and the rundown housing on Olive Avenue? These were givens if you were born and raised in Oshawa before 1990 (Waste is set in 1989, as its auto industry and the economy fell into recession). It may be Larkhill in name, but it’s Oshawa to any of us who lived there.

Even still, the sheer density of gloom in Sullivan’s novel begs the question of whether it’s a fair depiction of any actual city. By misfortune or malevolence, virtually no one comes out of Waste unscathed: teeth are extracted, bowling balls crack skulls, plastic bags suffocate schoolchildren. Rather than let this ghastly, unending sequence of events numb you, Sullivan provides context and consequence for each action, couching them in human terms that enrich but do not forgive their perpetrators. Jamie committed a heinous act as a teenager; Moses, still a teenager, has fallen in with a cadre of skinheads. Instead of accurately reflecting reality, it appears Sullivan wants to remind the reader, in rapid-fire succession, that violence is the result of our most mundane experiences: lashing out in anger, careless thoughts or actions, well-meaning but misplaced affections, and, worst of all, just plain bad luck.

If Waste has any failing, it’s that the protagonists are merely spectators at the carnival; there is no action for them to take and no way to meaningfully influence the outcome of Larkhill. Because of this, the book is rich with character sketches but thin in its plot. Misery is an unstoppable force of nature in Sullivan’s novel, one that leaves almost no room for its inhabitants to demonstrate their agency. This contrasts with his 2013 short fiction collection, All We Want Is Everything, where protagonists occasionally took righteous retribution or made meaningful changes in their lives. But the choice to show Waste’s main characters as powerless feels deliberate, perhaps emblematic of the battered industry-town experience.

A quick scan through my own Oshawa memories makes me think that Sullivan made the right decision. There’s the kid I used to play with, who later became a skinhead, and who is now a repeat, and registered, sexual offender. There are the idiot friends of my brother who got busted for B&Es and selling a crate of marijuana to the police. There’s the classmate who used an army gas mask to smoke hash oil, cut with motor oil, next to the high school. And there’s the poor kid that hung himself when he found out they weren’t sending him to juvenile detention, but to adult prison instead. Any one of them could be a resident of Larkhill, unfortunate cases to add to Sullivan’s roster.

For Jamie and Moses, and indeed for any lost souls in a decaying town, there seem to be only two meaningful options: stay, or leave. I left. Sullivan left. But Waste offers a visceral reminder of the forces that keep people overwhelmed by inertia, stagnant and unable to act in their own best interests—a sense that jives with Oshawa’s painfully misguided new slogan: “Prepare to be Amazed.” Sullivan’s debut certainly amazes but, like the city in which the book is set, it’s not in a way that makes you feel good.

Jay Hosking (@DocHosking) will publish Three Years with the Rat, a novel, later this year.

Jay Hosking (@DocHosking) will publish Three Years with the Rat, a novel, later this year.
X