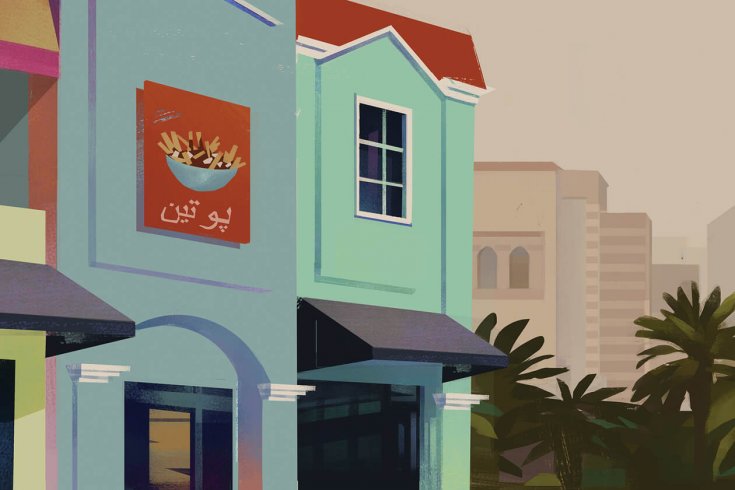 Ryan smolkin draws the line at North Korea. “I wouldn’t just deal with anybody,” says the founder and CEO of Smoke’s Poutinerie—a fast-food company that now has about 150 locations in Canada and the United States—while listing the countries, some run by oppressive regimes, where he is seeking franchise partnerships. “I’m not gonna be selling out just because someone’s got money.”

Smolkin started the folksy Canadian chain with a single location in Toronto just ten years ago. He had ten by 2010, twenty in 2011, and forty in 2012, both benefiting from and fuelling the countrywide poutine craze. In another five years, Smolkin predicts the company will have 1,300 locations around the world—that’s 767 percent growth. Though Smolkin’s product is essentially french fries with cheese curds and gravy, the shops sparkle with long menus, featuring every conceivable add-on, from jerk chicken to perogies. The Quebec comfort food will be customized in new markets, catering to local tastes as needed by, for example, substituting lamb for pork in the Middle East. Smolkin has just signed a deal for twelve locations in Qatar and is in talks with people in Russia, Turkey, Pakistan, Iraq, and Iran.

Smolkin also has a signed a letter of intent to open thirty-five locations in Saudi Arabia, which are currently on hold following tensions between the Canadian and Saudi governments; Smolkin hopes he can resume his expansion there soon. Poutine is far from the highest-profile Canadian export to Saudi Arabia: famously, we have been selling arms and military vehicles to that country. Asked if Saudi Arabia’s human rights record is a concern for his business, Smolkin declines to comment. “I won’t get wrapped up in politics,” he says. But entering the market in this country—which Amnesty International has found to practise religious discrimination, curtail freedom of expression, torture detainees, and limit women’s rights—means making decisions to support or challenge existing human rights standards, and Smoke’s is far from the only Canadian food brand facing these choices. In 2017, Second Cup Coffee Company Inc. opened a location in Tehran, its first in Iran. The Canadian coffee chain has franchise locations in thirty-three countries, several with questionable human rights records, including Azerbaijan, Angola, Bahrain, Cyprus, Egypt, Iraq, Lebanon, Malaysia, Oman, Pakistan, Qatar, Romania, Saudi Arabia, and Yemen. (The company declined to comment about human rights abuses in these countries.)

“If you go to the coffee shops in the Middle East, Tim Hortons and Second Cup—and I’ve been to many of them—you actually see how they’re so popular,” says Walid Hejazi, a professor of international business at the University of Toronto’s Rotman School of Management and a board member of the Canada Arab Business Council. “Anything Canadian has a huge appeal to people in that part of the world because Canadians are known for being very polite and open. . . . That’s why so many Canadian brands do so well in the Middle East.” (Tim Hortons, a formerly Canadian brand now owned by a global investment firm, plans to open more than 1,500 locations in China over the next decade.)

It’s unlikely that a café or poutine franchise is going to directly engage in the modern-day slavery the likes of which we are seeing during, say, the construction of the Qatar football stadium—where, in many cases, migrant workers had their passports confiscated, their pay withheld, and were tricked into debt, an Amnesty International investigation found. But new markets do present labour and sourcing challenges. Opening shop in a country known for denying citizens basic human rights means responsibility rests with an individual company to ensure that things like workplace-safety standards, enforced by the government in Canada but not taken seriously by some other countries, are made a matter of corporate policy.

“It sounds very naive to me,” says Seema Joshi, head of business and human rights at the Amnesty International Secretariat. “Generally, Canadians don’t think that Canadian companies could possibly be causing or contributing to human rights abuses in other countries.” Amnesty International’s work, she says, shows food companies can be implicated. One example is in Indonesia, where palm oil produced with child labour ends up in items from companies including Nestlé and Kellogg’s. In Myanmar, through a subsidiary, Japanese brewing company Kirin made a financial contribution to the military, which is accused of ethnic cleansing.

“There is a corporate responsibility to respect human rights in global operations,” says Joshi. “It’s a normative standard that has been accepted by the United Nations Human Rights Council.” This means that it is not a law, but all states are taken by the UN to be bound to respect this principle. The UN also publishes a guidebook called Corporate Responsibility to Respect Human Rights, which elaborates on this standard. “No company has said to our face that ‘no, we don’t have a corporate responsibility,’” Joshi says. “But what they also know is that, within the countries they operate, there is often no law—most often no law—to hold them to account as to whether or not they do the human rights due diligence.”

France has gone further, in 2017 enacting the corporate duty of vigilance law, requiring French companies to establish plans to prevent human rights abuses in all their business activities, including those of large companies operating outside France. In Canada, as is the case for many UN members, the responsibility of human rights enforcement falls to businesses themselves.

Hejazi argues that these expansions into countries with human rights abuses are beneficial for the countries in which they take place; he believes that, in addition to a prosperous financial exchange, Canada also exports a progressive cultural influence that he has witnessed first-hand. “As I’ve interacted with people in Saudi Arabia over the last decade, I have seen a sea change in their attitudes,” he says. He talks about a shift toward allowing women to drive and reducing separation between genders—“that’s all because of Western influence.”

Free-market economists and human rights activists are not going to come to a consensus on the political efficacy of open markets any time soon—they will continue to debate whether international investment and trade with oppressive regimes opens them up to liberal, democratic values or if economic leverage bolsters the strength of authoritarian leaders. When China’s accession to the World Trade Organization was being debated, then US president Bill Clinton shared Hejazi’s philosophy that capitalism would promote democracy. “By joining the WTO,” said Clinton, speaking at Johns Hopkins University in 2000, “China is not simply agreeing to import more of our products. . . . The more China liberalizes its economy, the more fully it will liberate the potential of its people.” Clinton’s view, while an appealing ideal, hasn’t necessarily been reflected in outcomes. China recently abolished term limits for the presidency, effectively making Xi Jinping president for life, and has come under sharp criticism for detaining anywhere from tens of thousands to upwards of a million people from ethnic and religious minorities in re-education camps. No trading partner has done anything about it.

There is a lot of Western influence in Saudi Arabia’s culinary landscape. With it, says Hejazi, comes a moderation of political ideas. This, he believes, is just as valuable to Canadians as the billions of dollars in trade. “Canada’s engagement with Saudi Arabia has two huge pillars. The one pillar is a large and aggressively growing economic relationship. But secondly is the impact we can have on Saudi Arabia through an exchange of ideas—through student exchanges, through business exchanges,” he says. “It’s those people coming here and seeing, oh my God, if men and women are in the same room and women are driving, if people are able to discuss controversial issues, our society’s not going to crumble. . . . It doesn’t have to be seen as a threat.”

While iced coffee is not going to protect free speech and poutine is not going to transform a monarchy into a democracy, the potential of soft power, Hejazi says, may be more effective than force or sanctions. “When you’re very aggressive in putting pressure on these countries, it almost always backfires,” says Hejazi. Many people “see it as a Western power sort of imposing their view.”

Corey Mintz has written for the Globe and Mail, the Toronto Star, and the New York Times.
Kyle Scott