Good Mom on Paper: Episode 17 of The Deep Dive | The Walrus
Skip to content 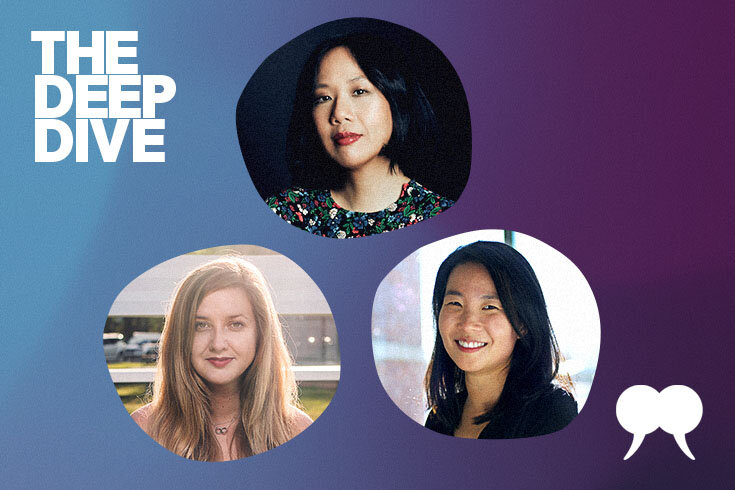 SIMRAN: Welcome to Deep Dive from The Walrus, a weekly podcast that takes a deeper look into the happenings at The Walrus. I’m Simran Singh. On this week’s episode:

ANGELA: I got the chance to speak to three creators we admire at The Walrus, writer Teresa Wong and editors Stacey May Fowles and Jen Sookfong Lee.

SIMRAN: We excerpted Wong’s story for thewalrus.ca. It’s part of an anthology edited by Fowles and Lee, called Good Mom on Paper: Writers on Creativity and Motherhood.

ANGELA: The anthology explores “the fraught, beautiful, and complicated relationship between motherhood and creativity.” Wong’s story follows one heck of a tantrum.

ANGELA: This isn’t your first collaboration. Why do you keep, keep working together?

STACEY: [laugh] Jen, why do we keep working together?

JEN: Why do we keep working together? We have a joke: I’m a Leo, Stacey May is in Aries. And the joke is also that we’re highly compatible, just astrologically, but I like working with Stacey May cause, well, she’s my friend, first of all. But also it’s easy. There is never, I don’t think we’ve ever had a fight. No, like I don’t. We ever had an argument. No,

STACEY: And yeah, it’s it actually like blew my mind. The first time we worked together that it was just, you know, I’ve worked on a number of collaborative projects and just, you’re sort of like my dream partnership. So every time I’m gonna embark on something, I’m like, I wanna do it with Jen. So

STACEY: And I, I have definitely learned a great deal from you as well. And we’ve talked about this a number of times that it, you know, as it is relevant to this book, I became a mother when I started working with Jen and she sort of, she was my literary, mid wife

ANGELA: It actually leads really well to my next question, which is where do, did this specific collection come from as an idea?

JEN: Well, it was Stacey May who – we were working on a previous anthology, Whatever gets you Through, which are a collection of essays by survivors of sexual assault. And Stacey May had said to me, I’d really like to work with you again, but can we do something that’s a little lighter, which is not to say that, you know, good mom on paper, isn’t always light, but it’s that we, the promotion of whatever gets you through was really tough for us just in general, the, the reading of the book or the editing of the book is one thing, but the promotion of it was really tough. And we really wanted to work on something that spoke to who we both were in a way that first of all, doesn’t get talked about very often. And second of all, that we could sort of get into in a way that felt really joyous, cuz we would, we really wanted to work together and feel joy. That was part of it. Not that we don’t feel joy anyway, cuz we do, we make a lot of jokes, but like, you know, and we wanted the book to feel like a celebration of something and a celebration of the way that we work and the kind of friendship that we have to.

STACEY: Yeah. And I, I feel like there was, you know, as we say in the introduction, there was a, a frustration that happened when we were promoting that book is the apparatus of literary promotion is not very accommodating to somebody with a child. And at the time I had a very young child and I didn’t know how to navigate it and I didn’t know how to set up boundaries and I didn’t know how to ask for what I needed. And I felt sort of like if I did ask for what I needed, would I be, you know, would people be saying I was difficult or you know, that was those kind of my feeling at the time. So I think that these sort of smaller conversations that me and Jen were having grew into this idea to sort of reveal the invisible and those particular struggles of what it means to be a parent and have an artistic career.

ANGELA: I’m going to ask you this first, and then I’m going to give Teresa a chance to answer; Stacey May, Jen, what direction did you give your readers?

JEN: I think we … did we even have length guidelines? We might have.

STACEY: We did. I, I mean, what me and Jen like to say is that we like to get out of the way because you know, we, we choose the people that we work with quite a few – we get and then give them freedom, explore the idea.

JEN: As Stacey May said, we like to get out of the way, but we like to make space for the creativity to evolve. And however it is that it needs to evolve. And we both know that we both start projects that end up being something quite different from what we imagine. So I would say if you asked any other contributors, they say, oh, they didn’t tell us anything. [laugh]

STACEY: Well, and, and maybe that’s sort of a further rebellion against the system, right? This idea that, you know, you pitch an article to somebody and it, it has to be fully formed. And I don’t know, I find that when I’m writing the exploration is what forms the idea, right? So giving writers this freedom can often produce something so much more spectacular and so much more interesting because you didn’t, you know, sort of lock them into this preconceived idea beforehand.

TERESA: I think it was just anything about creativity and motherhood or writers writing in motherhood. And it was fairly open when Stacey May had reached out. I actually asked her because I’m a cartoonist and, and graphic memoirist, whether they’d be open to something with illustrations. And she said, yeah, if there’s something that you’d like to do along that line, then we’d be happy to look at it. Yeah. So it really felt like sky was the limit, but you know, within that theme of creativity and motherhood. And so I, I thought, well, okay, I’m not this whole, since March of 2020 has been a big write off in terms of productivity, creativity,

And so they liked my submission and, and, and I’m glad because it kind of really felt like I was, I was getting back into being a writer again, after being kind of everything else, you know, like a teacher and a [laugh] and a mom and a home dentist, like [laugh] I kept having to pull my children’s teeth. Like, so in the first year of like quarantine a, we call them quaran-TEETH. I pulled like 12 teeth. My kids are all elementary school age. So that’s the time you lose teeth [laugh] and, um, that kind of thing where it’s like motherhood and life kind of took over everything and there was no time for reading or writing.

ANGELA: Just to reassure our listeners, these were all wiggly teeth your were pulling…

ANGELA: I know there are 20 stories in the anthology, but can you talk a little bit about Teresa’s story?

And I was just so inspired by her during a time that I was particularly vulnerable. And it, I mean, it was interesting being at a big event like that because I was running into people who knew me in my past life. And there was this sort of weird identity thing that was happening to me. And I just felt like in that room, you know, there was other mothers on the panel, there were babies in the room and it just was this like exhale. So when we were thinking about this book, I mean, she was one of the first names that came to mind and it’s lovely that what she did for me in that room, she’s now doing via this book, she’s written this incredibly beautiful piece about depicting her child’s tantrums and all of the complex feelings that go into, you know, depicting something that, you know, some people might say is too vulnerable to put out into the world. But also that, you know, she there’s a line in it that says she’s about lending validity to a life. It is invisible. And I, that just resonates with me completely this idea that there is this invisible life that mothers have, and we just don’t deem it as valid or important or worthy of exploration. And I just, she’s just such a perfect addition to this collection in that way.

ANGELA: Teresa, I’m going to give you the last word on this – can you give us the elevator pitch for your story?

TERESA: I guess. So it would be how drawing my son, as he threw tantrums,

ANGELA:
As always, the links for all these articles can be found in the show notes for this episode.

ANGELA MISRI:
Thanks for joining us on this week’s episode of the Deep Dive. It was produced by myself, and Simran Singh and I edited this episode.

Thanks so much to Teresa Wong, Stacey May Fowles, and Jen Sookfong Lee for joining us this week.

Music for this podcast is provided by Audio Jungle. Our theme song is This Podcast Theme by Inplus Music. Additional music is Stay Cool by Loops Lab, Podcast Intro by Inplus Music, “Oh My” by Patrick Patrikios and “Umbrella Pants” by Kevin MacLeod.

Don’t forget to subscribe to Deep Dive from The Walrus on Apple Podcasts, Spotify, or wherever you get your podcasts. And if you like what you heard, please leave us a review and rating. It really helps people find the podcast.

See you next week when we take our next deep dive.