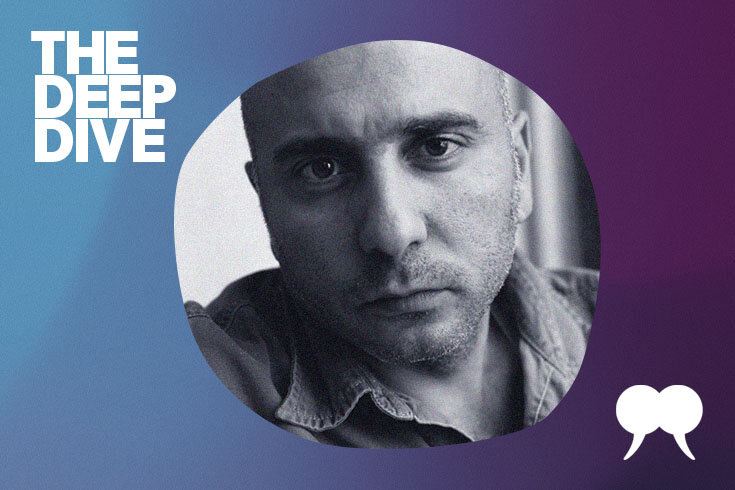 SHEENA ROSSITER: Welcome to Deep Dive, a weekly podcast that takes a deeper look into the happenings at The Walrus.
I’m Sheena Rossiter.

ANGELA MISRI: And I’m Angela Misri. On this week’s episode….

ANGELA MISRI: This week we dive into the world of fiction, and we’re in conversation with acclaimed writer Rawi Hage. Born in Beirut, he lived in Lebanon through the civil war in the 1970s and then immigrated to Canada in 1992.

SHEENA ROSSITER:His work has been translated into more than 30 languages, and you might know him for his acclaimed novels such as De Niro’s Game, Cockroach, and Beirut Hellfire Society.

ANGELA MISRI: Hage most recently released a collection of short stories called Stray Dogs. And we ran an excerpt from the story “The Wave” from this collection in the May issue of The Walrus.

SHEENA ROSSITER: He recently sat down with Jessica Johnson, the editor-in-chief at The Walrus, about his latest book, being a political writer, and identity.

JESSICA JOHNSON: You’re most known for novels and Stray Dogs out this past spring is I think your first short story collection. What led you to go a bit shorter?

RAWI HAGE: Uh, actually I started the writing short story. My first attempt at writing was short stories and during confinement, I decided to maybe complete a book of short. So sit down, start writing, but I realised there’s a thread in all the stories. There’s a lot of references to photography or light darkness and light and all symbolic literally form. So it was a conscious decision to write a book about photography.

RAWI HAGE: Well, I think I tend to write lot about marginal people and I, and I realised that also, you know, certain period of time in photography, uh, because of technical changes, uh, technical advancements, many people were photographers who couldn’t adapt. They either change each professional. It became on the margins. And also, uh, I think I believed when I went to school, I witnessed a change in academia in this course about photography, photography had a, had a major intellectual and academic change. And then that again, I think put some people, uh, on the margins again, I, I guess, um, I was one of them. I couldn’t adapt to the new technologies. I didn’t, it was very expensive. And when I went to school, I became, you know, stuck between two movements, the end of modernism and the beginning of post-modern and post-colonialism. So I witnessed these changes and I, um, I mean, I tend to write about, uh, usually about people who to put it, uh, in a very, uh, simple way people fall between the cracks, you know.

JESSICA JOHNSON: You’ve always stood out to me as a writer in Canada, who engages actively with World Affairs. And in that in this collection in particular, that’s, you know, very literal stories are set in political hot zones. Poland, and Lebanon, Baghdad, do you deliberately set out to say, Okay, I’m gonna write a story about civil war? Or is it that you have a creative goal? And then you realize that it’s tied to some world event?

RAWI HAGE: Oh, well, good question. Um, I think globally, I never thought in a local way. Uh, I think probably I’m a transnational writer somehow more and more. I see things are much more interconnected, but at this, this book, I think it’s has a cosmopolitan feel because it of photography, the medium, the medium is so universal and at same time it’s so versatile and so adaptable to many cultures. Uh, I think every culture imposed its own aesthetics it’s own agenda on it. It’s a very rich, medium, the very rich history. And I think it’s one of those things that was used and abused. I mean, if I looked at the spectrum goes from wedding photography all the way to surveillance. So it’s a rich medium to write about

JESSICA JOHNSON: People who know you know that you were a photographer before you went into writing, but not everyone may know that. Can you talk a bit about how you made that transition? Because they’re, in some ways related art forms, but another way is completely different.

RAWI HAGE: Yeah. I think for a long time, the intersection between photography and the written word was very constrained. I, when I left, uh, Lebanon, I end up in New York for a few years. I worked as, uh, my first job was to clean the dark room. Then slowly I start printing. And the first time I, I saw photographs image surface in the, in the liquid and the developer, I was, uh, I was blown away and I, and I decided to become a photographer. Then I moved here and I studied, I studied commercial photography. Then I, then I went to, uh, Concordia. I did a bachelor degree in photography, but I think at, at certain level, as much as I love photography, I thought it’s a medium that has its limitation. And I fundamentally, I think I wanted to tell the story of war that I experienced and somehow photography always felt short. I, I think I wanted to be more lyrical about it. I wanted to, you know, more longer interactive and I start driving short stories. And I also, I felt at certain point I, I couldn’t make it as a photographer. I couldn’t Pierce into the art scene. And I, as a commercial photographer photographer, I was a disaster. So I, um, consciously was subconsciously changed medium.

JESSICA JOHNSON: You live in Montreal, but I know that you travel a good part of the time. I’ve always, always wanted to ask a writer this, do you find it easier to write about places when you’re not there?

RAWI HAGE: I do personally. Yeah. I like to distance myself. I try to go to be a couple of time to write over there. It, it didn’t work.

JESSICA JOHNSON: Because it’s too immediate?

RAWI HAGE: Probably because it’s too immediate. The books I wrote about Montreal, cuz I do write about Montreal. I, I was elsewhere. So yeah, this distance is it create a distant word. And that place that you are gonna write about becomes almost unattainable bit like a dream. So for writers who are not very realistic in their world, that distance help.

JESSICA JOHNSON: Do you find that your readers do they agree with your political opinions? Do they want to argue with with you about it?

RAWI HAGE: Yeah, of course. I mean, when I wrote about Lebanon, it’s such a divided place, uh, based on religion or politics, et cetera, people engage me, but people like binaries when it comes to politics, they want you to take a definite side and I don’t compromise, but I, I see, I see things more nuanced. Again, I’m not being diplomatic here. It’s not my work. It’s not, I feel that I’m courageous in my work, but I’m a free thinker and I think free thinkers don’t give allegiance to anyone or anything cuz we all know the, you know, the victim with some power might become the victimizer. That’s the nature of human being. And I think I’m not fond of our species. So I think evil doesn’t belong to anyone such egalitarian thing. So in a way, my work is more reflection on well human condition and wider maybe protest. I think there’s constantly a protest in my, in my writing.

JESSICA JOHNSON: Yes, let’s talk about the story that appears in The Walrus, it’s called “The Wave” and it in I think it embodies some of these some of these ideas you sort of ask answer some of my questions about it. It’s about a character that foretells a natural disaster. Is there anything you’d like to tell people about that short story or what you were hoping to do with it?

RAWI HAGE: I think ultimately this story beyond the humour and the absurdity of this story, I think, uh, I presented characters who deals with life in a very, uh, confrontational way, nature, all the protagonists. They, they push it to, to a place where it becomes almost madness and it seems like everyone is mad. Everything is mad, including nature itself. And also the character, you know, he’s very ambiguous about his own ethnicity is critical of it. Uh, but at the same time he wants to save it.

JESSICA JOHNSON: Rawi Hage’s latest collection is Stray Dogs. You can read an excerpt from it in the May issue of the Walrus and at thewalrus.ca. Thank you so much.

JASON HERTERICH:
I’m Jason Herterich, and here’s what we’ve been talking about this week at The Walrus.

The blizzard in Manitoba had our Slack abuzz, especially because our Justice Fund fellow, JS Rutgers, is based out of Manitoba. She’s wrapping up her time with us (and we’re really looking forward to her story about housing inequality in Winnipeg).

Because so many of us are also writers (including children’s fiction, non-fiction, and screenplays) we were half intrigued and half vaguely threatened by Twitter news of a Tokyo cafe that basically holds you to your writing deadlines. It’s called the Manuscript Writing Cafe and this is for sure not an endorsement… mostly out of personal fear that someone will make us hit all our deadlines.

This is a week of religious holidays and observances, from Ramadan to Easter to Vaisakhi (VAY-sake), and not only does much of The Walrus partake, but we got to reshare some of our great archival pieces as a bit of our own celebration.

As always, the links for all these articles can be found in the show notes for this episode.

ANGELA MISRI: Thanks for joining us on this week’s episode of the Deep Dive. It was produced by Sheena Rossiter and myself, and Simran Singh helped me edit this episode.

Thanks so much to Rawi Hage for joining us this week, and to Jessica Johnson for doing the interview.

Music for this podcast is provided by Audio Jungle. Our theme song is This Podcast Theme by Inplus Music. Additional music is Stay Cool by Loops Lab, and “Podcast Intro” by Inplus Music, “Floating Cities” by Kevin MacLeod, and “Oh My” by Patrick Patrikios.

Don’t forget to subscribe to Deep Dive from The Walrus on Apple Podcasts, Spotify, or wherever you get your podcasts. And if you like what you heard, please leave us a review and rating. It really helps people find the podcast.

See you next week when we take our next deep dive.